For India, 1919 was historic for many reasons, including the Jallianwala Bagh massacre and the start of Mahatma Gandhi's ascendance in the Indian freedom movement. For pharma company GlaxoSmithKline the year was historic too, because it marked the beginning of its relationship with India. On November 13, 1924, the company began operating in India through its agent H.J. Foster & Co. By 1947, it was manufacturing drugs at Worli in Mumbai. Soon afterwards, it changed its name to Glaxo Laboratories. Its brands have since became household names that generations of Indians literally grew up on and lived with: Farex baby food, Horlicks health drink, Eno antacid, Crocin tablets for pain and fever, and Iodex pain balm.

"The company looked at India as an investment for the long term," says Hasit Joshipura, Senior Vice President for South Asia and Managing Director of GlaxoSmithKline (GSK) Pharmaceuticals - the Indian arm of UK-based GSK Plc, as the company is now called. "It started manufacturing here way back in the 1950s and indigenised very early."

The Indian arm has been headed by Indians since the 1970s. G.S. Medley, managing director in India from 1973 to 1977 was the last foreign chief, and J.S. Khambata, who succeeded him, the first Indian. GSK's first calendar from1928, which also advertised Glaxo's Malted Milk
From an early stage, GSK evolved an Indiaspecific business model. Products were manufactured here and sold at India-friendly prices. One of its most popular products, launched in 1963, was Betnovate ointment to treat skin irritation. Says a company spokesperson: "We adopt a flexible pricing approach for middleincome countries like India. We look at each country individually. Within a country, we also sometimes adopt tiered pricing to facilitate access to medicines." She gives the examples of various cancer drugs. "On average, the products in India are priced at 25 to 30 per cent of the price in developed markets."

An India-specific innovation GSK officials often mention is the briefing folder medical representatives carry while meeting doctors. They maintain GSK created it in the 1970s. The company's drugs business, with 3,300 medical representatives marketing its numerous brands, has helped GSK Pharma in India reach revenues of around Rs 2,800 crore today. 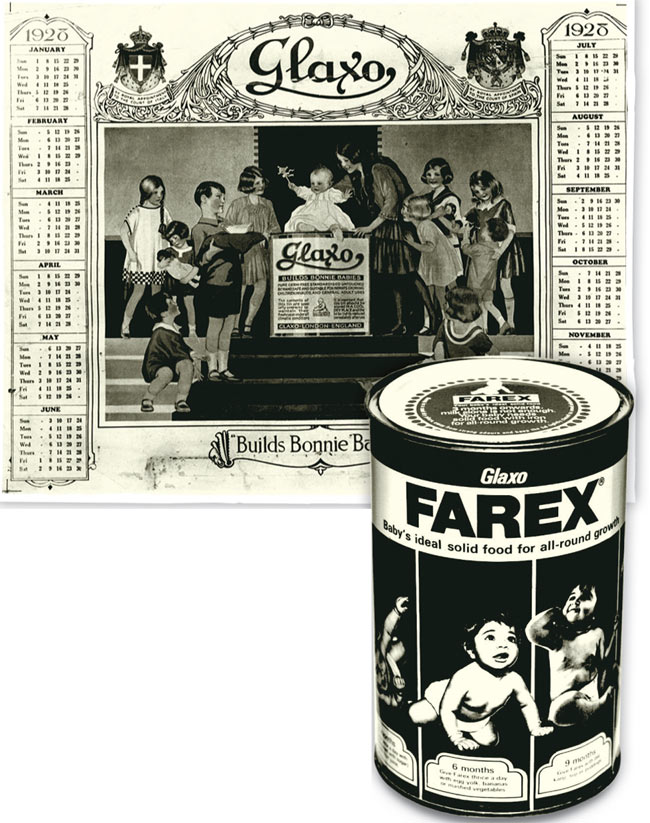 (Aove)Another Glaxo calendar from 1928; (below) Farex baby food tin
In pharmaceuticals, GSK's India portfolio includes prescription medicines across therapeutic areas such as dermatology, gynaecology, diabetes, oncology, and cardiovascular and respiratory diseases. The company is the market leader in most of these categories. It also makes vaccines for hepatitis A and B, influenza, chicken pox, cervical cancer and other diseases.

Its other business in India. consumer health-care products, is also flourishing. Indeed, for the British parent, India is the fastest-growing region in consumer healthcare.

GSK Consumer Healthcare has doubled its top line in the last four years to more than Rs 3,000 crore - a compound annual growth rate (CAGR) of 19 to 20 per cent. "We hope to maintain it," says Zubair Ahmed, Managing Director of the Consumer Healthcare division. Food research product testing plant at Thane, near Mumbai
GSK Consumer Healthcare's Ahmed says: "The bigger challenge today is the slowing down of the economy, coupled with the rise in prices of agricultural commodities such as wheat, sugar, barley and milk that go into the making of Horlicks." To combat these, he and Joshipura are building synergies between their businesses. For instance, in rural markets, GSK tries to provide a complete solution for children affected by contaminated water. It provides de-worming medicines such as Zentel, followed by Horlicks to improve nutrition. India is the fastest growing region for consumer health-care business worldwide: Zubair Ahmed
Joshipura says India is a huge opportunity. "It is an opportunity for all pharma companies, not just GSK," he adds. "Today, GSK Pharma has 22 brands among the top 300 brands of the country. In five years from now, we would like to see this number rise to at least 35 brands." Globally, he expects future growth mainly from emerging markets, particularly China and India. "Emerging markets have been given a new thrust under GSK's current global chairman, Sir Andrew Witty, who has spent several years in the emerging markets and therefore knows their needs and potential first-hand," he says.
TweetYoutube
Tags: GlaxoSmithKline | Oldest MNCs | MNCs in India

SKF: Getting its bearings right