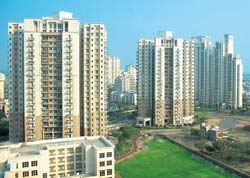 In 2007, there was a sharp increase in the number of real estate companies tapping the capital markets.

Nine real estate developers raised close to $3.6 billion (Rs 14,400 crore) in 2007 through initial public offerings (IPOs), where DLF’s IPO alone attributed for about 65 per cent of this sum.

Private equity (PE) investments boosted the real estate sector, where the number of investments more than doubled since last year. Some of the major PE deals include Merrill Lynch’s investment of $424 million (Rs 1,696 crore) in DLF and Morgan Stanley’s $152-million (Rs 616-crore) investment in Oberoi Constructions.

On the regulatory front, the Urban Land Ceiling and Regulation Act (ULCRA) was repealed by the Maharashtra government, while SEBI issued guidelines with respect to real estate mutual funds, which may pave the way for small investors to leverage the investment opportunities in the sector.

Power - In the limelight