With the financial services sector in a tailspin and the slowdown in the US market spreading to Europe, India's booming IT industry finds itself directly in the firing line. In fact, it is facing its toughest challenge in years. How will the industry cope? Rahul Sachitanand goes into the details.

In mid-September this year, several employees at India’s largest software exporter, Tata Consultancy Services (TCS), were laid off and many more were given months to shape up or be shown the door. With the financial services sector in a tailspin and the slowdown in the US market spreading to Europe, India’s booming IT industry found itself directly in the firing line.

For the last five years, the IT industry has blossomed as companies looked to leverage India’s low-cost, high-quality base for IT services. Over the last five years, the Indian market has grown from $21.6 billion (Rs 1.04 lakh crore) to $64 billion (Rs 3.07 lakh crore), employing 800,000 people. In this time, Indian IT companies have leaned heavily on financial services and the US market (the biggest industry and geography for IT services) and now they’re feeling the heat as a slowdown in financial services begins to spread to other sectors such as real estate and manufacturing. What’s worse, a 60 per cent reliance on the US market has singed the industry, causing Indian vendors to review their plans. 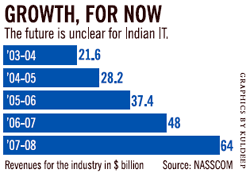 “We continue to see a lot of uncertainty. Its heightened levels have made customers cautious,” admits Wipro’s Joint CEO Suresh Vaswani. However, his peers in the industry are much more frank about the current state of the market. “The slowdown in US is for real and it is wait’n’watch for at least the next two quarters,” says S. Premkumar, Corporate Officer & Global Head, Financial Services, HCL Technologies. A key concern, according to analysts, is the limited spending by other industries, which will prevent the Indian IT industry from recouping the losses suffered in financial services. “Financial services companies spend about 10 per cent of their earnings on IT, compared to 3-5 per cent by other industries. Indian IT can expect to face rough weather in the foreseeable future,” says John McCarthy, Vice President at Forrester Research.

There have been other fundamental shifts in the global IT industry that have further complicated the market uncertainties. When the dotcom slowdown happened in the early part of this decade, large MNCs were small players in the Indian market and two large players, IBM and Accenture, had just 3,000 people here. Since then, these two companies have ramped up to over 150,000 people each in the country and are rapidly building on this base. The existing business model of Indian vendors has also heightened the impact, say industry watchers. “A large part of the work is project-based and not long-term annuity contracts. The former gives higher margins and makes sense to chase, but the reason it gives higher margins is because the revenue streams are unpredictable and can be cut off at any point,” says Siddarth Pai, Managing Director and Partner for TPI India, an offshore advisory firm. 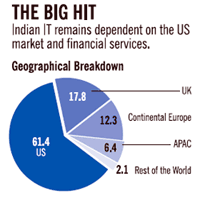 Annuity contracts require onshore delivery capability from the vendor and the willingness to take on the client’s people. “Indian vendors have been slow to do both and, hence, have a revenue mix that is skewed towards project work. This project work is—by definition—more risky,” says Pai. While MNCs have rapidly expanded their India numbers over the last couple of years, Indian vendors have only begun to become global operators. “Satyam has development centres around the globe—more than 30 in all. In fact, our three most recent acquisitions were in Europe and the US. Satyam is already a global company—we just happen to be headquartered in India,” says Hari T., Head, Global Marketing & Communications, Satyam Computer Services.

Already, there are visible signs of a slowdown in the Indian companies. For one, there has been a significant reduction in volume growth for key players (Infosys, for example, recorded one of its lowest volume growths of 0.5 per cent on stable pricing resulting in dollar growth on about 0.7 per cent quarter on quarter, according to an IndiaInfoline report) and other metrics such as hiring and campus offers, too, are in decline or have been frozen. “We will certainly review our current business model where we have a 30 per cent bench in a muted market. We will increase utilisation, but we’ll hire conservatively too,” Kris Gopalakrishnan, Infosys CEO, told BT recently. The company declined to comment on this story, citing the silent period for its second quarter results. Given the weak conditions, techies will have to get used to smaller hikes, with Wipro, for example, expected to dole out increments of 8-13 per cent region, compared to 15 per cent and more previously. 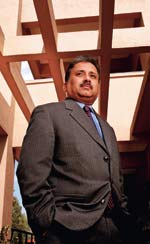 Suresh Vaswani/
Besides Indian IT companies, the overall technology industry has seen a spate of lay-offs, with companies across the board cutting down flab to stay afloat. In the semiconductor market, most design centres of companies such as Intel, NXP and Texas Instruments have frozen their hiring, while online giants Yahoo and AOL are downsizing. Nvidia, the graphic processor maker, recently added to this increasingly lengthy list when it announced plans to cut 60-70 people across its Bangalore, Pune and Hyderabad centres. “Everyone is going to look and re-look at their centres in India. There will be an even greater emphasis on cost and efficiency,” says Forrester’s McCarthy.

Experts say Indian IT needs to broad-base its revenue and geographical bases, expand its global delivery capability and move aggressively towards a non-linear business model, where the direct link between revenue and headcount growth is broken. HCL’s Enterprise Transformation Services promises cost savings by reducing business cycle and process times for clients. The service will be priced on a revenue share or outcome-based model. The service has been piloted with four clients, resulting in a cumulative savings of $580 million (Rs 2,784 crore) for users. In terms of global delivery, several companies have taken their first steps. TCS has entered Uruguay and Satyam is in Cairo, Egypt. Hari T.
It isn’t just delivery these companies are after; several of them are also looking to tap these markets. “Today, we serve clients in more than a dozen industry sectors. From a geographical standpoint, we generate 40 per cent of our revenues from Europe and APAC, making us less dependent on the US than at any time in our history,” points out Satyam's Hari. As part of its Blue Ocean strategy, HCL is looking at markets such as Europe, Latin America, Brazil, Japan, Korea and China. "In terms of verticals, we are seeing growth in the Telecom, Aerospace, Media & Entertainment and Life Sciences and Healthcare verticals," says HCL's Premkumar. 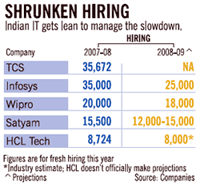 Click here to Enlarge
Despite these ambitious plans to become global players, several industry executives and analysts argue that Indian IT companies have a lot to learn. "Management maturity is yet limited among Indian companies, especially in the midtier, to manage a global operation," says Forrester's McCarthy. Meanwhile, Anurag Purohit, an analyst with Religare Securities, says companies will only reap the benefits of this diversification over the longterm. "Europe has been more conservative about offshoring due to language and regulatory issues." Unlike the US and UK, continental Europe is not just one market, but several small segments with strongly entrenched local players, says Andy Green, CEO, Logica, a London-based technology services company.

Just as they prepare to put in place these measures to survive the slowdown, some market watchers say that companies such as Infosys, which have a very small domestic business, may actually take it slow over the next few months. While the rupee was pegged at 39/dollar and threatened to fall to 35, the reverse has happened. The rupee has, instead, depreciated against the US dollar, reaching about Rs 48 against the greenback. "This move could give hard-pressed IT companies a 7-8 point cushion and help them focus on the export market," says one analyst.

In this evolving story on Indian IT, the final chapter has not yet been written.

Laying down the gauntlet