Getting the highways sector back on track can be the surest way of beating the slowdown. 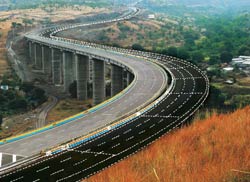 The small car Nano holds a big threat—to Indian roads. If half of the 60 million two-wheeler owners get one each, the roads would simply cave in. Already, road traffic is growing 9 per cent every year, at a time the rate of building new roads has slowed to a crawl.

The original objective of the National Highways Development Project (NHDP), launched in 1999, was to reach 50,000 km by 2012. Just about 10,000 km is complete, however, and we are nowhere close to achieving the original target because of the inexcusable sloth at the Ministry of Shipping, Road Transport and Highways under the DMK leader from Tamil Nadu, T.R. Baalu, who single-handedly killed the momentum built by the NDA government. He changed as many as four chairmen of the National Highways Authority of India (NHAI) within 20 months. “The NHAI had done a lot of good work but over the last couple of years it lost all its autonomy,” says Athar Shahab, Deputy Managing Director, IDFC Projects. Baalu’s incompetence held up projects worth Rs 84,000-Rs 98,000 crore for months.

Meanwhile, biggies such as Reliance Infrastructure, GMR Group, Gammon India, HCC and Shapoorji Pallonji are bidding enthusiastically for state highway projects in Gujarat, Andhra Pradesh, Karnataka and Haryana. Karnataka, which is offering 22,000 km of roads for development, received responses from over 30 companies in the pre-bid conference held on February 28. Andhra Pradesh has received 20 bids for three road stretches totalling 450 km worth Rs 2,000 crore. Gujarat has received 46 bids from 19 companies for a 637-km project involving an investment of Rs 1,540 crore.

The national highways sector will, however, remain sluggish till the change of guard at the Centre, after which road projects worth more than Rs 70,000 crore will be up for grabs in the next six months for companies that can tie up funds. The Public-Private Partnership Approval Committee (PPPAC) cleared infrastructure projects worth $5.98 billion in November 2008, in a bid to tackle the economic downturn caused by the global financial crisis. These include 21 highway projects.

Based on this, road construction companies are expecting the NHAI to tender 19 projects or a total of 2,096 km worth Rs 21,455 crore. This could be the ultimate bailout for India Inc. “Private sector participation in the roads sector in India is comparable to that in China and Brazil,” says Rachid Benmesssaoud, Operations Advisor, World Bank. “We’re looking forward to new road tenders— from the NHAI—a key element of our business portfolio,” says the official spokesperson of the GMR Group, which is in a comfortable financial position owing to its gains from the huge demand-supply gap in the power sector.

In addition, some state governments could call for bids: Tamil Nadu for the Chennai Outer Ring Road (Rs 2,000 crore) and Karnataka for the Bangalore Peripheral Ring Road (Rs 4,500 crore). The Karnataka Road Development Corporation has also come out with 51 projects totalling 10,000 km of state highway at a cost of Rs 40,000 crore. Other state level projects being planned include the Rajasthan Mega Highways Project (Rs 2,750 crore), the IT Corridor project in Tamil Nadu (Rs 1,700 crore) and the BOND-BOT project in Madhya Pradesh (Rs 2,300 crore). Some of the other roads-to-riches for companies and investors in this sector include some 820 km in Bihar that are to get a $468-million upgradation over the next 25 years with an Asian Development Bank loan and a grant from the Centre. Then, Delhi’s MCD plans to spend $1.24 billion in 2009-10 on a Commonwealth-Games facelift for the Capital’s roads. Under a Rs 4,120-crore project, the government plans to lay six-lane roads over 6,500 km of national highways on the Design-Build-Finance & Operate (DBFO) basis in Golden Quadrilateral and other high-traffic stretches.

The last 18 months were lost in disputes over the tendering processes and eligibility criteria the UPA formulated. Since January 2006, the PPPAC has approved 87 projects, which includes 77 highway projects. The NHAI got barely 19 bids for the 60 projects it tried to tender, of which only seven were awarded.

It is restructuring or redesigning 21 projects and recalling bids for four projects. By the time it finally resolved the issues, the global crisis had arrived. As a result, there aren’t enough financially-closed road projects ready to go, as is the case in some of the other infrastructure sectors.

The congestion on Indian roads leads to an economic loss of Rs 5,000 crore per annum which could progressively go up to Rs 6,01,00 crore by 2017. The annual economic loss on account of the check post system alone is Rs 32 per capita. To convert the loss into a GDP gain, the new government at the Centre will have to undo the UPA’s mistakes. For the contracts to concretise into growth on the ground, the issues still dogging private developers will have to be resolved. These include delays in land acquisition, slow dispute resolution, lack of coordination between different government agencies. It’s time for flyovers for tiding over these stumbling blocks.