Vikram Shah, an orthopaedic surgeon from Ahmedabad, had a dream - he wanted to set up a multi-specialty hospital of his own. The joint replacement specialist ran a small nursing home, apart from working at two city hospitals. But it was a big step to take, more so with even his wife discouraging him because of the enormous risks involved. 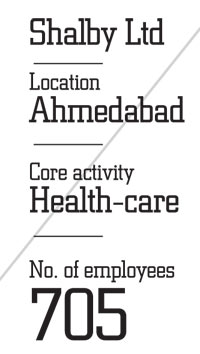 "I didn't have the guts or the money to start a corporate hospital chain," says the 50-year-old Dr Shah. But eventually he found both. In 2004, pooling his own resources and taking a loan as well, he set up Ahmedabad's first multi-specialty hospital with an investment of Rs 24 crore. Shalby Hospitals has since grown into a network of four such in Gujarat and one more in Goa. It has 750 beds in all. The chain posted revenues of Rs 168.5 crore in 2011/12, not far behind the far better-known Wockhardt Hospitals which clocked Rs 218 crore during the same period.

Shah says the Shalby hospital on Ahmedabad's Sarkhej-Gandhinagar Road performs the maximum number of joint replacement surgeries a day in a single hospital anywhere in the world. "We do 30 surgeries a day on average. Today it has been 39 knees and two hips," he added the day Business Today met him.

Shalby has no debt on its books and, in an ironic twist, has bought out one of the hospitals Shah used to work at earlier, Krishna Hospital in Ahmedabad. The chain's CEO Ravi Bhandari says the company believes in owning majority stakes in hospitals because management control is crucial.

Shalby has enormous room to grow: the Indian health-care delivery market is poised to expand more than six times between 2011 and 2021 to $84.2 billion, according to a December 2012 report by PricewaterhouseCoopers. Already, the chain has plans to take its total bed count to 4,000 in five years and widen its presence across the country.

If it succeeds, Shalby could well be a far bigger and more recognisable name in health-care in future.