Semiconductor demand in India is increasing, but manufacturing of semiconductors remains a distant dream. 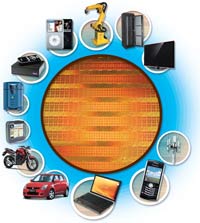 Today, semiconductors are used in virtually every piece of modern electronics, from mobile phones (the SIM card is a semiconductor) and telecom equipment to consumer electronics, infrastructural equipment and automotive systems. Though semiconductor demand is slackening at present, the proliferation of semiconductor-enabled products and the expected increase in uptake of hardware and handsets once the next-generation network regime (3G) is in place will ensure a strong demand for the product.

Yet, semiconductor manufacturing is still in its infancy in India, even though the country continues to be a global leader in semiconductor design—Noida and Bangalore have emerged as major design hubs. Also, while design of India-specific products that use semiconductors is decent, it could be better. 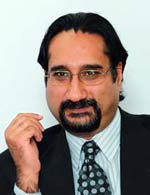 “Most people mistake semiconductors as being all there is to semiconductors,” said Guruswamy, adding, “The truth is that semiconductors are everywhere. Look at solar power—solar cells and thinfilm solutions are semiconductors.” The ISA survey bore this fact out: While microprocessors were the single-largest component of revenues (given their high price) at 22 per cent, semiconductor products were going into a whole host of products.


Ever newer uses for semiconductors are being constantly created. Over the past two years, demand for the global positioning system (GPS) modules that SiRF makes has exploded. “You will see location services being offered in more and more wireless handsets and companies will use such services to locate employees and assets. There is a significant demand from logistics firms for such services and, strangely, there are people who offer anti-theft services using GPS devices,” explained Pande. Ashu Pande
The ISA contends that government should either enhance support or just stay clear. “The tax structure in certain cases is crazy,” complained Shetty. “Take the case of (television) set-top boxes. There is no reason why such products cannot be made in India. But the tax structure is so punitive for components that it is cheaper to import the entire box rather than just components,” she says.

GPS receivers, too, face similar issues. While the government has cut excise duty on GPS handsets down to the mobile standard of four per cent, standalone GPS navigation devices without a International Mobile Equipment Identification (IMEI) number and no screen do not qualify for the excise cut and duties stand at 24 per cent, with the result that sales of car-based systems, hugely popular in the US, Europe and Japan, have been moribund in India. 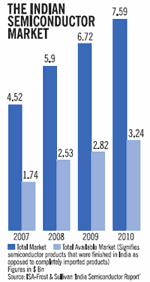 Government inaction has been particularly pronounced in the case of Smart Cards. A 1999 plan to make all driving licences and car registration documents on smart cards has been stuck due to interagency wrangles and different norms followed by different states. These licences would have blown open a massive market for smart cards.

But the biggest issue facing the industry is the lack of Indiandesigned products that take advantage of the technology. “India has some really unique needs,” argues Ahuja. “In fact, the success of such products is evident in inverters, a product unique to India. It is not as if no work is happening, but a lot more work can happen.” As the bulk of semiconductor design happens in India, a spurt in India-specific products would also mean that Indian design firms will get more business. However, there are new opportunities for Indian firms and semiconductor companies working out of India. “The rise of low-cost manufactured products can spur demand significantly. Look at the Tata Nano, once Tata Motors proved that such a product could be built, it led to other manufacturers of automotive systems starting to develop lowcost products, and that can spur demand,” said Guruswamy. He claimed that companies that make automotive systems, such as airbags, have already started to develop low-cost solutions. And how would the semiconductor industry benefit? Well, the fact is that today, the average car is a moving computer with tens of semiconductor control units controlling everything from the engine to the air-conditioner. 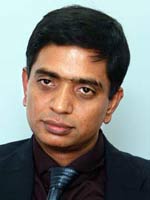 Ganesh Guruswamy
Our panel gave India an “A+” on design and a “C” on products but an ‘F’ in manufacture of semiconductor wafers. “The question is: Do we really need to manufacture?” Shetty argued. In fact, many of the semiconductors used for defence purposes are made by government institutions, but even here, the fact is that the immense processing power of products like the “Cell” processor used in the Sony Playstation 3 or standard offthe-shelf Intel processors can easily be repurposed for military purposes (in countries like Iran and North Korea, which have strained ties with the United States, this is done on a regular basis to develop nuclear technology). 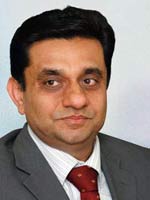 Vivek Sharma
So, where is the Indian semiconductor industry headed? The ISA report highlights great numbers, and our discussion brought out the fact that despite a few missteps here and there, on the whole India was doing well even on the product front. “The spread of semiconductors on devices has caught the government unawares. Electronics, navigation devices, cameras and phones all use semiconductors and all of these are intermingling with each other but have different excise rates. What would the ISA like? “If government cannot encourage the industry, then they should just step back and not interfere. That way, everybody would gain. In certain areas, like transportation, for example, the government has to look through petty regional differences and be proactive. The use of semiconductors can improve the quality of life,” argued Guruswamy. Maybe, the industry does have a point.