Did you borrow from this bank? It loves you but won’t let you get away with defaults. 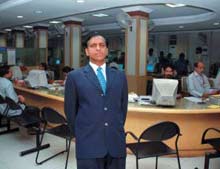 V.A. Joseph
Joseph decided to focus on the problem, and told his managers to reduce the net NPA to below 0.50 per cent within three years. He and his men were able to walk the talk: for the year to March 31, 2008, the net NPA was down to 0.33 per cent.

The remarkable feat has helped the Kerala-based private sector bank shine bright in the annual Business Today-KPMG survey of Indian banks in the Quality of Assets category. As it recovered bad debts, it also grew its profit to a record Rs 152 crore last year and, for the first time in its 79-year history, it has come out with a bonus issue of shares.

Joseph was aided by three factors: by 2006, all branches were on the core-banking solution (CBS), the bank has a rich pool of graduates and postgraduates, and its home turf Kerala has a high literacy rate.

“The main reason for this excellent record in recovery has been continuous follow-ups at every level. Since we are 100 per cent under CBS, monitoring has become easy,’’ Joseph says. “We start the monitoring process from the first installment itself. Whenever we see the possibility of a default, we act.” The CEO says equal care is being given to new loans, so that fresh slippages do not occur.

Click here to Enlarge
“We have been very careful about our assessment of credit proposals, creditworthiness of the borrower and his track record,” he says.

Kerala’s literacy picture is also a blessing for SIB, as a mere notice under the Securitisation & Reconstruction of Financial Assets & Enforcement of Security Interest Act (SARFAESI) creates tremendous peer pressure on the defaulter.

“The threat of action under SARFAESI was enough. People came running, offering to settle their dues before we took any extreme action,’’ says Joseph.

SIB SIB has also been untouched by the Indian liquidity crisis and is cash surplus. “We hope to end the year with a business of about Rs 30,500 crore and a net profit of Rs 190 crore,’’ declares Joseph. His words could turn out to be an understatement.
TweetYoutube