The empire crawls back

Pre-liberalisation they constituted the top tier of Indian business, only to flounder in a more competitive marketplace. Now their NextGen is attempting to come back by riding on new-found opportunities. 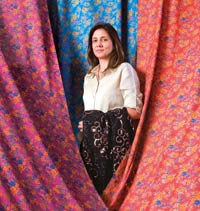 Avisit to the office of the 150-year-old Khatau Fabrics Group in the Laxmi Building compound of Ballard Estate, Mumbai's erstwhile commercial hub, can be an unnerving experience. Guests are ushered into what was once the office of the late Sunit Khatau, the former Chairman of the textiles, cement and shipping group, who was shot dead in May, 1994. A large framed photograph of Khatau is placed on what was once his chair and other photographs of him hang on the walls of the large room. Nothing else seems to have changed—the furniture and even the items on the table remain as they were. A magnifying glass, and a miniature vintage car are among those items. Time has stood still inside the room—almost like a wish, a desire to go back to the past days of glory.

For the NextGen in the Khatau family, however, the past is not the way to the future. Whilst one faction of the family, headed by Dilip D. Khatau, has inherited group company Varun Shipping, Sunit Khatau's three daughters, Reena, Neesha and Aparna, are trying to revive the group —which at its peak in the '80s boasted revenues of Rs 2,000 crore—by picking up contemporary trends in textiles and retail. The Khatau story is one that finds echoes in some of the oldest business houses of India—establishments that were once among the country's topmost.

Right from the Mafatlals to the Kilachands to the Walchand Hirachand Group in the West, the Shrirams and the Modis in the North, the Bangurs in the East and the BPL group in the South, India's corporate landscape is littered with family businesses whose best days may be behind them. Some were broken by the violent trade unionism and gang wars of Mumbai in the '80s and others by family splits and competition from global enterprises. Some made merry in the Licence Permit Raj and then found the going tough when India opened up its economy to foreign competition; others found themselves squeezed by the regulation and red tape of the Licence Raj itself, what with licences doled out only to a select few (in the quest for a ‘planned' economy post-Independence). These are stories of some of India's top business families that had been there, done that—and then lost the plot or missed a trick. These are also stories of how the next generation of these families are trying to regain some of the lost glory, albeit in most cases with scaled-down ambitions.

How the Damage Was Done
Consider the Walchand Hirachand group. Founded in 1920, it was once among the top three business groups in India—often counted after the Tatas and the Birlas even in college text books of modern India in the '80s. The group splintered into four parts in the mid-'90s. A third- generation scion of this group, Pallavi Jha (45), is today the Chairperson and Managing Director of Walchand PeopleFirst, which was formerly Walchand Capital. In fact, Walchand Capital was the flagship of the group at some point in history. Jha still operates out of their legendary office building Construction House in Ballard Estate—where a road is also named after Walchand Hirachand. Pallavi's uncle Ajit Gulabchand today heads the much more successful Hindustan Construction Company (HCC). Pallavi's father, Bahubali Gulabchand, was the last Chairman of a unified Walchand Group. After his death in 1990, the tremors of a rift were felt across the group and four years later the first split took place. "There was bitter fighting and the family broke," recalls Jha. In the first phase when the Doshis and the Gulabchands slugged it out—Jha points out—it took close to four years for a settlement.After much haggling, a Rs 50-crore figure was arrived at as compensation from the Doshis to the Gulabchands. Ajit Gulabchand, who was the largest shareholder among the Gulabchands, inherited HCC. The construction firm today is a flourishing business, growing at a robust 18.5 per cent annually in a fast-track sector, and ironically Jha, whose operations are not comparable in terms of size and scale, makes the point that: "If splits are not quickly reached, they can breed stagnation." For the Khataus, a split in the mid-'80s only compounded their woes.

Says Reena Khatau (34), Executive Director, Khatau Fabrics: "Unlike other members of the textile fraternity who were crippled by the Datta Samantled strikes, the Khataus were largely unaffected. Sadly, it was around this time in the mid-'80s that the family split." The company her father got, Khatau Makanji Spinning and Weaving Company, had set up a new mill that was set to come on stream. It was the first mill to make marble chiffon, an avant-garde fabric then, in India. But the inability to get loans in time and cost escalations made the mill—which had invested heavily in importing machinery from Japan—unviable.

Not future proof, yet