While it is everybody’s case that big, bold infrastructure creation is an imperative for the India of our dreams, the action on the ground continues to stop short of the mammoth requirements of a nation aspiring to grow in double digits. A new look at old problems, and some fresh solutions.

Last fortnight, amid a light drizzle, and with Beethoven’s Fifth Symphony playing, Delhi Airport acquired its third and the country’s longest runway. Among those present was an appreciative Civil Aviation Minister Praful Patel, top bureaucrats and executives from developer GMR Group, including G.M. Rao himself. The cause for celebration: The third runway made Delhi one of the few airports in Asia to have one. The icing on the cake: it was completed about six months ahead of schedule. And it is one of the few demonstrable examples of partial success of the much-hyped policy of public-private partnership (PPP). Civil aviation and telecom are the tiny glimmers in an otherwise gloomy infrastructure story for India. Bangalore-Mysore Industrial Corridor: Stuck over land transfer
Infrastructure seems to be one area where India as a country finds it almost impossible to deliver on the scale required. Many projects are delayed at the conception stage itself. Getting subsequent regulatory approvals is a maze in which many infrastructure providers have got stuck.

Why should this be so? After all, there is a ready market of infrastructure users who have time and again demonstrated their willingness to pay; the private sector’s capacity to fund and execute projects is hardly in doubt and even the government, at the highest level, believes infrastructure is the mantra for double digit growth (a government committee reckons India will need $500-billion or Rs 22 lakh crore investments in the sector during the 11th Five Year Plan).

Why, then, is service still not delivered? It is the nature of the animal, believes Gajendra Haldea, advisor on infrastructure to the Deputy Chairman of the Planning Commission. In infrastructure, he says, the commandand-control psyche survives despite the end of license raj.

“…state-owned monopolies continue to dominate different infrastructure sectors and the main resistance to change comes from their contract raj,” he says. That may well be the immovable force permeating the entire sector as roughly 70-80 per cent of the infrastructure spend is through the public sector. Delhi Metro: Changing the way the city commutes
“Unless there is a strong CEO driving it (example E. Sreedharan at Delhi Metro and Konkan Railway and R. C. Sinha and Nitin Gadkari for the Mumbai-Pune Expressway), the nature of the usual government contract often leads to a perverse incentive structure that rewards delay and cost escalation, rather than on-time performance,” says Shailesh Pathak, Senior Director, Investments, ICICI Venture, who himself has been in the public sector for 16 years.

In fact, ICICI Venture will shortly launch a Rs 6,000-8,000 crore equity fund for investments in infrastructure projects over the next four years.

Shailesh Pathak, Senior Director, Investments/ICICI Venture
Naturally, then, the private sector has been welcomed to bring efficiency and accountability—along with 20-30 per cent of the funds needed. And PPPs have become the buzzword.

Yet, as an exasperated Ajit Gulabchand, Chairman and MD, Hindustan Construction Company, says: “The handshake has to be a good one.” He cites an example: according to the NHAI, any increase in taxes after the award of the contract would be reimbursed. Yet, the same has been challenged right up to the level of the Supreme Court. Such uncertainties are additional risks, and the private sector abhors non-quantified, unmitigated risks. According to ballpark industry figures, roughly Rs 75,000 crore worth of infrastructure projects are stuck due to disputes.

The private sector is wary of taking the huge risks alone. Take land acquisition—the biggest factor delaying large-footprint infrastructure projects. Lagadapati Madhusudhan Rao, Chairman, Lanco Infratech, says: “Most major power projects require 1,000-2,000 acres and they need to be near highways, railways and water sources (up to maximum of 15 km away). All of this cannot be left to the private developer. There is need for government support here.” Yet, land acquisition is a messy affair even for the government and needs long-term sustainable solutions.

Ajit Gulabchand, Chairman & MD, Hindustan Construction Company
Environmental clearances still play havoc, more often than not. E Sudhir Reddy, Chairman & MD, IVRCL Infrastructures & Projects, recounts how the likelihood of there being a rare bird in the Budwel region of Cuddapah in Andhra Pradesh got the company into trouble during its work on an irrigation project. Company executives were jailed and equipment worth Rs 5-7 crore was seized. “For the next nine months, it was just visits to the courts, spending on court fees, spending man hours on getting the people freed and our equipment released,” he says, yet again pointing to the need for a greater government role in such issues.

Gajendra Haldea, Advisor, Deputy Chairman of the Planning Commission
Transparent rules and frameworks, with clear division of responsibilities between the two partners, are imperative for the success of PPPs. Here, Vinayak Chatterjee, Chairman of infrastructure consulting firm Feedback Ventures, says the government needs to play a crucial role in structuring or “cooking” bankable projects. “The private sector is willing to be the change agent. Yet, it needs a framework to operate in,” says Chatterjee.

And that framework has to be provided by the government— that is what the many failed and some successful projects have shown. Where the framework is clear and transparent with defined risks and returns, the private sector response has been overwhelming. Initially, private road operators were unwilling to take the market risk of tolling.

Once the annuity projects demonstrated the manageability of that risk, their aversion has gone down. But the list of bankable projects is not too long. “Should we not have had a larger volume of cooked projects farmed out to the private sector than what we have managed to do?” asks Feedback’s Chatterjee. Is there a lack of will? People like Haldea debunk the idea. “Which politician does not want to be associated with development?” he asks. Yet, development does drop off the agenda in the face of political exigencies. Despite having well-intentioned, competent people at the helm, the record of the UPA government has been sub-optimal. The same NHAI, which was delivering a few kilometres of road every day during the NDA regime, is now almost immobilised.

There are other examples of delivery backed by will and determination to get things done. When bureaucrats were allowed to take complete ownership of projects and given full autonomy by smart political masters, the performing ones worked wonders.

M.V. Subba Rao, Director, GMR Energy, says: “It is important that bureaucrats handling government infrastructure projects are retained till the project is completed. Changing them midway slows down projects.” Moreover, there has to be a means of institutionalising freedom as happened in case of NHAI’s creation or, indeed, in the case of the formation of Delhi Metro Rail Corporation (DMRC) as a joint venture.

So, what is the way out? Haldea believes the easiest way to improve efficiency in the sector is through the demonstration impact of PPPs and by increasing competition in different sectors. Singh of IDFC Projects agrees. “Our best hope is not in the government improving but in it becoming less relevant.” 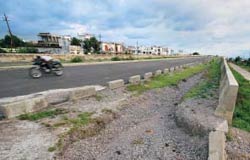 Road to nowhere: Incomplete flyover near Gomti Nagar, Lucknow
However, as the macroeconomic situation becomes tougher, it is not going to be easy to entice private capital into infrastructure projects. “For every percentage point increase in interest rates, the internal rate of return for the infrastructure projects drops drastically,” says Gulabchand. Add to that the absence of deep and liquid long-term debt markets and even the capital that is sitting on the shelf waiting to be invested suddenly looks more remote. Infrastructure necessarily needs long-term funding, and most current financiers do not have lending horizons beyond 10 years.

Then, there is apathy at the state level even though half the public spending in infrastructure is happening there. “A large number of infrastructure PPP projects are in the states and without their active participation, it will not be possible to achieve satisfactory results,” says Somak Ghosh, President, Corporate Finance & Development Banking, YES Bank. A few dynamic chief ministers could change the climate.

Standardisation of bid documents, processes and issues will help (too much can kill: at Ennore Port, the bid process eliminated two major global port operators at the technical stage itself). Less competition at the financial bid stage is hardly a desirable outcome. Yet, it is early days for the PPP process. And the hope is that we are learning. The question is: are we learning fast enough for an economy growing as fast as India’s?