She has helped Coca-Cola India steal a march over arch rival PepsiCo. 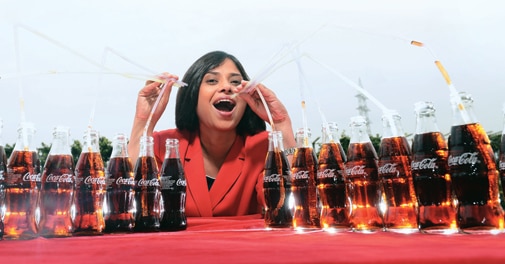 There is excitement in her eyes as she displays the photographs she took on her mobile during a recent trip to Guwahati. "This is outside the Kamakhya Devi Temple," says Anupama Ahluwalia, pointing to one. She draws notice to the young lady in focus in the picture. "She has a kiosk at the foothill of the temple that sells our brands. And her shop is a hot spot for teenagers in the area who come to her for a phone recharge or to buy stationary. This is the kind of retailer we need to connect with and develop a long term partnership with. And that can only happen by developing an emotional connect."

That the emotional connect matters is a lesson Ahluwalia learnt during her very first brush with sales and marketing. This was in 1988 when, seeking 'work experience' to bolster her curriculum vitae before going in for a Masters in Business Administration, she took up a direct marketing job, selling Collier's Encyclopaedia.

"From making cold calls and paying multiple visits to potential customers, following up vigorously, reaching out to the customer and convincing her, I did it all," she says. "I even read the entire encyclopaedia, which enabled me to convince the customer there was value in the product."  In all, she managed to sell 18 sets of the encyclopaedia in 10 months, which brought her "handsome pocket money" and "loads of enjoyment". "A sale happens when you understand the emotional need of the consumer and connect with her," she adds. "And every sales closure should be accomplished in a way that it facilitates a new relation."

After the MBA in Marketing from Mumbai University, there was no looking back. Her first job was in the processed foods division of Voltas Ltd in 1991, followed by a 13-year long stretch with Colgate Palmolive in India and in Thailand, and a four year stint with Idea Cellular Ltd, playing key roles in developing new product strategies, revamping product portfolios and building share leadership. Sanjeev Aga, her former boss at Idea Cellular, says Ahluwalia is methodical, disciplined and comfortable with the nuances of communication. "As a marketing person she is very articulate in putting her point of view across, but at the same time she is receptive to other viewpoints," he says.

Today, as Vice President, Marketing, India and South West Asia, The Coca Cola Company, she leads strategic initiatives to build the portfolio of its brands. "The big challenge is to leverage the strength of every brand in the portfolio and make it grow," she says. But change is in the offing as Coca Cola recently announced that Ahluwalia would soon be taking up a leadership position for a short while in Hindustan Coca Cola Beverages Pvt Ltd, its largest bottling partner in India, to acquire direct experience of its bottling system, after which she would return to Coca Cola India.

How has Ahluwalia performed? According to market tracker Nielsen's data (obtained from industry sources), as of May this year, Coca-Cola India had 56.7 per cent market share, while PepsiCo India had 34.1 per cent. Individually, Sprite and Thums Up, both owned by Coca Cola, are the two top soft drinks in the country with 15.2 and 15 per cent market share respectively. Ahluwalia is credited with bringing back Salman Khan as brand ambassador for Thums Up in 2012. Khan had been used in Thums Up campaigns till 2001, but not thereafter. His return, insiders maintain, has done wonders for the brand. It was Ahluwalia too who succeeded in roping in Kareena Kapoor for the bold new positioning of Limca, with its Pyaas Badhao campaign.

"Looking at all aspects such as advertising, marketing, public relations, brand activation, consumer acceptability of the imagery of the brand and more, Ahluwalia has emerged as a front-runner," says brand expert Harish Bijoor. He notes that thanks to the Pyaas Badhao campaign, Limca was able to win back market share. "The campaign resuscitated a category and a brand that had otherwise been neglected. Kareena leading the brand is certainly an achievement to wear on the sleeve," he adds.

The third season of Coke Studio India which started on August 17 will have the likes of A. R. Rahman, Salim Suleiman, Amit Trivedi, Ram Sampath, Clinton Cerejo and Hitesh Sonik participating. Ahluwalia is also focusing a good deal on improving Coca Cola's social media presence and impact. She is even trying to get the coveted FIFA Football trophy to India.

Married for 18 years, Ahluwalia also values relationships and swears by work-life integration. "If you enjoy what you do, everything else falls in place," she says to explain how she deftly manages both her work and her home. She has a passion for languages, and is learning Spanish in her spare time. She also loves to cook, "anything from paneer bhujia to Thai Curry". But obviously it is work which takes the front seat. "Work is a form of expression for me, of my individuality, of what I believe in, of what I stand for," she says. "My entire day goes in building conversations. From retailers, sales teams, market visits… it's a new experience and fresh learning every day and that keeps me motivated."