We expect to become a $2-billion (Rs 8,600-crore) company by 2012,” says Indresh Batra, Managing Director, Jindal Saw, of Jindal ITF, a less-than-a-year old subsidiary. Sounds ambitious? Yes. Is it achievable? Yes, given the new business opportunities opening up in the infrastructure sector. 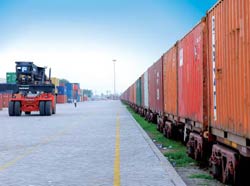 Private Container train at Loni, near Delhi: The Railways is throwing up new opportunities
The new subsidiary, with the mandate of being Jindal Saw’s infrastructure holding arm, is training its sight on three lines of business—water & waste management, transportation (inland and coastal waterways and rail) and shipbuilding. It has already won a Rs 220-crore waste-to-power contract in Delhi and is among the short-listed bidders for a $300-million (Rs 1,290-crore) water and utilities contract for the Gujarat International Financial Tec-City.

It is not alone. If the private equity arm of IDFC, the infrastructure financial services company, is rapidly investing in companies focussed on some of these new areas, a new subsidiary, IDFC Projects, is planning to get into the trenches with development, implementation, ownership and operation of infrastructure projects. This subsidiary has already snagged a lucrative water management project in Haldia in West Bengal, in a tie-up with Jamshedpur Utilities & Services Company (JUSCO), the utility that manages Jameshedpur’s water supply, and Ranhill Utilities Berhad of Malaysia.

The project involves the construction, operation and maintenance of a 113.5 million litre per day water treatment plant on a designbuild-finance-operate basis.

Pradeep Singh, Vice Chairman & Managing Director of IDFC Projects, says: “The project will be the first end-to-end, river-to-tap water project to be implemented as a public-private partnership (PPP) in India, and, indeed, one of the few such projects in the world.” Business is clearly booming. The new private townships being built, and others still on the drawing boards, will throw up more such urban infrastructure opportunities.

There’s more: the government’s efforts at “renewing” 63 cities under the Jawaharlal Nehru National Urban Renewal Mission will only add to the volume of business—in water and waste management or in improving urban transport. Then, the growth of private retail chains is forcing fresh investments in supply chain, logistics and warehousing.

“The logistics industry is receiving massive investments due to the changing requirements of the retailers as well as suppliers,” says Vineet Agarwal, Executive Director, Transport Corpor-ation of India, adding that for every square foot of retail space created, 4 square feet of backend space is needed. But the biggest projects, from the public sector and its master, the government, are still on the drawing boards.

For example, the staid Indian Railways is transforming itself into a story of dynamic growth and this is throwing up many opportunities for the private sector. The proposed $6-billion (Rs 25,800-crore) dedicated freight corridor, which includes linkages to eastern and western ports from north India, will require freight terminals, logistics parks and inland container depots (ICDs), among many other things. The spin-off benefits include the Rs 1,047-crore order to infrastructure giant Larsen & Toubro to build a wheel factory at Chhapra in Bihar. And it is not just Indian companies that are benefiting from this gravy train. A few months ago, Bombardier Transportation, the Railway Equipment Division of Canada’s Bombardier Group, bagged a contract to supply advanced Traffic Management Systems (TMS) to the Central Railway in Greater Mumbai.

Sudhir Kumar, Officer on Special Duty with the Railway Minister, believes that the Indian Railways can provide a value proposition for its customers and even competitors. In this context, he points to the successful operation of private container trains.

That apart, the Railways has more infrastructure projects lined up to entice the private sector. There’s the multi-billion dollar revamp of the New Delhi Railway Station that is being planned. About 13 bidders are already salivating at the size of the project. “We expect to close the transaction by January. Once this goes through the rest will be easy,” says a Railway Ministry official.

In the Phase I itself, 25 more stations have been identified, of which work on the Delhi, Patna and Secunderabad stations will be undertaken in the current financial year.

Add to that the nuclear energy option that should open up once the Indo-US nuclear deal goes through and there seems to be a range of options to diversify in the infrastructure space. Nationbuilding, surely, can be a very lucrative opportunity.

A bridge to somewhere