Each of this year's winners outperformed its peers by some distance. 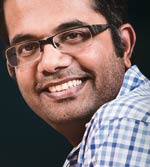 R. Srinivasan
SBI Mutual Fund's Magnum Emerging Businesses Fund has surpassed its peers in eight of the 11 quarters between April 2009 and December 2011. The fund, managed by R. Srinivasan, Head (Equities), has generated an average return of 35 per cent over the past three years, the highest in the Aggressive Growth category of the BT-Value Research Mutual Fund rankings.

Srinivasan credits stocks such as Page Industries, Goodyear India, Redington India and Hawkins Cookers for the fund's performance. "At one point we had almost 11 per cent of the fund in Page," he says.

As of December 2011, the fund was managing an average of Rs 456 crore in assets. "About 50 to 60 per cent of the fund's money is in the top 10 holdings. So, the risk has been high. But the fortunate part is that stock selection has been very good," says Sanjay Matai, who runs Wealth Architects, a Pune-based financial advisory firm.

Srinivasan and his team look for a core competency while picking stocks. For example, Redington has a 30 per cent share of the distribution market for IT, telecom and consumer durables, while Page has a franchising deal for Jockey apparel. They also look for factors such as return on capital, growth, valuation, management capabilities and integrity. In mid- and small-caps, management and integrity are important. For instance, the fund is wary of small- and mid-cap real estate companies as it is not very comfortable with their managements.

Given how the mid-cap space has appreciated over the past year, the fund is increasing the proportion of large caps in its portfolio. "Mid-cap stock prices have risen and there are a lot of high beta (risk) names," says Srinivasan, explaining the shift to large caps.

While Value Research has given the fund an average risk rating, Matai recommends caution since the fund has been putting its money in the small- and mid-cap space, which is easily buffeted by policy changes. "They are invested in Manappuram Finance, Muthoot Finance, etc. These stocks saw a sharp correction post a small regulation from RBI about their deposits."

Srinivasan and his team are well aware of the underlying risks. "EBF is a high-risk, high-returns fund. Whenever we sell it, we always focus on the negative aspects, so that the investor is fully aware of what he is getting into," he says. 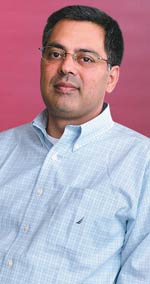 Anoop Bhaskar
UTI Opportunities Fund has topped the 'Equity: Long-term Growth' category of the BTValue Research Mutual Fund rankings. The fund netted a score of 84.08, about 11 points more than ICICI Prudential Focused Bluechip Equity Retail, the scheme placed second on the list. It posted three-year returns of 27.53 per cent compared to ICICI Prudential's 26.63 per cent.

The fund's performance underlines the fact that size is not everything. With average six-monthly assets under management (AUM) of Rs 2,017.63 crore, UTI Opportunities bested schemes such as HDFC Top 200, which is five times bigger, and Franklin India Bluechip, which is twice as large.

"This fund limits the number of stocks in our portfolio to 35-37, so we have to take more concentrated calls. We cannot buy three companies in a sector," says Anoop Bhaskar, the UTI Opportunities fund manager. He is also the Head of Equity at UTI Asset Management Company. "We don't try to play for every twist and turn in the market. If we take three-four broad calls every six to 12 months and then get maybe two right, we'll be happy. We don't want to be obsessed with getting every call right."

The fund is optimistic about the financial services sector's prospects. "We still think that banks will be strong. We just hope the market doesn't run ahead of itself because it has these expectations from RBI (on rate cuts)." The sector leads the pack, accounting for 22.5 per cent of UTI Opportunities' AUM as on January 31 this year, followed by fast moving consumer goods at 13 per cent. HDFC Balanced Fund has over Rs 502 crore in average assets under management. About 65 to 72 per cent of its investments are in equity and the rest are in fixedincome products. The equity portion is divided almost equally between large- and mid-cap stocks.

The philosophy for equity is to buy quality stocks at reasonable prices and hold them for long durations. "We do not like to churn our portfolios much," says Setalvad. Explaining the fund's bottom-up approach, the fund manager says he prefers to select a stock and fit it in the portfolio rather than looking at the portfolio's need, and then finding a stock to match it.

In the fixed-maturity products portion, investments go into shortduration products that are normally held till maturity, usually two years. These investments are made in government securities as well as corporate bonds.

"What is good about this fund is that it has managed the downside very well. The new fund manager seems to have made a difference," says Sanjeev Ahuja, a New Delhi-based investment advisor and Founder-CEO of SA Wealth Management. "In 12 years, the NAV is up six times to Rs 60. That is much more than a bank fixed deposit, which would have been around Rs 30 in this period." 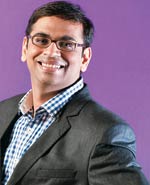 Maneesh Dangi
Birla Sun Life Government Securities Fund Long-term Plan has been adjudged the winner in the debt (bond) category of the BT-Value Research Mutual Fund rankings. With a compounded annual returns of 11.2 per cent over the past three years, the Rs 500-crore fund has outperformed its peers by some distance.

The Government Securities Fund is a long-term gilt scheme that invests only in Central or state government securities and short-term treasury bills. Within this narrow framework, it follows a highly flexible strategy, looking to benefit from short-term abnormalities in the interest-rate curve. This protects the portfolio from any lacklustre performance by longdated instruments, while pepping up returns, albeit for a short duration. "We avoid both euphoria and despondence, and continuously look for absolute returns. We try to avoid relative performance traps," says Maneesh Dangi, the fund manager and co-Chief Investment Officer of Birla Sun Life Mutual Fund.

Active management of interestrate risks and the ability to identify and gain from blips in the interestrate curve have helped Birla Sun Life GSF Long-term Plan score double the points of DSPBR Strategic Bond Inst, the No. 2 in its category.

"Markets are mostly smart, but often they misprice securities. Our objective is to look for dislocations and exploit opportunities across credit and duration points," says Dangi. For instance, even as RBI cut interest rates, the fund capitalised on anomalies such as high long-term government bond yields.

So, what is the fund's philosophy towards volatility in interest rates? "In my view, volatility is generally the experience of the less wise, as the larger direction of markets is generally secular. We try to educate our investors to look through daily ups and downs and target trends, depending upon their asset allocation needs," he says.

Dangi says the fund has performed well because of a sound understanding of the growth, inflation and market framework. "A year ago, when the rest of the world said India's GDP growth would be around nine per cent, we said it would not be more than seven per cent. That's the reality today." 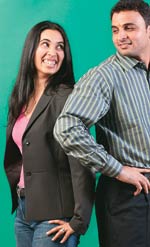 Sunaina da Cunha and Kaustubh Gupta
Birla Sun Life Floating Rate Longterm fund has been a topper in the floating-rate category for the past three years. The fund recorded a compounded annual growth rate of 7.83 per cent during this period and is the winner of the BTValue Research Mutual Fund rankings in the debt (liquid) category. Over the past year, it has delivered returns of almost 9.15 per cent, higher than the 8.17 per cent offered by the benchmark CRISIL Liquid Fund Index.

"Active duration management to take advantage of short-term interest rate movements has primarily contributed to the fund's performance," says Sunaina da Cunha, who manages the fund along with Kaustubh Gupta.

The duo's approach is to identify dislocations in rates due to liquidity and credit spreads. "We believe that market cycles have shortened considerably over time, and this requires funds to be managed dynamically," says Gupta.

In recent quarters, a debt fund manager's job has become even more demanding, because of rising interest rates. With RBI frequently hiking rates in an effort to rein in inflation, debt fund managers have been required to keep their eyes peeled for quick opportunities in trading cycles.

Gupta and da Cunha have invested in a judicious mix of high-quality corporate deposits, commercial papers and T-Bills after thorough due diligence. "We look for dislocations in the short end of the yield curve," says da Cunha, explaining the maturity profile of the papers held in the fund. The strategy has paid rich dividends. Clearly, it is working well.