Union Bank of India under M.V. Nair is setting new benchmarks in efficacy.

The 15Th floor of the Union Bank of India building at Nariman Point offers a panoramic view of Mumbai’s financial market. At one end is life insurer LIC’s Yogakshema Building that has withstood many a challenge and at the other are those of giants like SBI and the Bombay Stock Exchange. But for Mavila Vishwanathan Nair, Chairman & Managing Director, Union Bank of India, the view is particularly re-assuring. “I get lots of positive energy (by just looking),” he says, leisurely gazing through the long windowpane. “I call up Vijayan (LIC Chairman T.S. Vijayan) whenever I feel a bit down,” he adds. 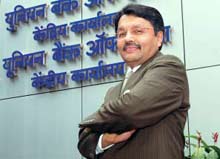 M.V. Nair
But for now, it’s a moment of elation for Nair. His efforts in enhancing efficiency and productivity have been endorsed by the BTKPMG Best Banks study, which has ranked Union Bank #1 on these two parameters. Overall, the bank has improved its ranking from #8 to #4, next to HDFC Bank. “We managed to create higher skill levels by focussing on training and development of our people,” Nair says, adding that moving the bank’s backoffice functions to centralised hubs had improved the productivity of the branches.

Today, the bank’s cost-to-income ratio at 44.4 per cent (as of September 2008) is among the best in the industry—it was 43.96 per cent in September last year (see graphs). The bank’s planned foray into AMC and life insurance also won’t impact its cost structure. “The AMC business doesn’t require much capital,” says Nair. The bank plans to fund the life venture with its income from selling third-party mutual fund schemes and life insurance. It earned about Rs 25 crore in fees last year and expects to mop up Rs 35-45 crore this year. Click here to Enlarge
The bank’s asset quality is among the best: it’s ranked #3 this year in net NPAs at 0.17 per cent, and at the top in NPA coverage with a 91.21 per cent coverage. “We are very focussed on recovery as well as provisioning,” says Nair, who wants to turn Union Bank into a tech-savvy outfit providing all the services that private sector banks boast of.

But through all this, the bank has not stopped adding new branches and people. It is adding 500 branches this year. “Typically, a branch takes about 12-18 months to break even,” says Nair. As for hires, the bank plans to add over 4,000 people by March 2009.

“We all had a golden phase of 4-5 years. Now there are challenges for banks over the next one-and-a-half years,” says Nair. In the same breath, he adds, “this is the real test.”
TweetYoutube