When U.K. Sinha took charge of UTI Asset Management Company in November 2005, it was the largest fund house in the country, with nearly Rs 25,000 crore in assets under management (AUM). When he left in February 2011 to head the Securities and Exchange Board of India (SEBI), it had slipped to the fourth spot.

A year on, UTI AMC still does not have a full-time chief and is now No.5, with average AUM of Rs 57,817 crore as of December 2011. Experts say it might slip further if the leadership issue is not resolved soon. Rivals SBI Funds Management, with Rs 41,550 crore in AUM, and Franklin Templeton Asset Management, with Rs 35,640 crore, are not far behind.

Since Sinha left, UTI could not launch any scheme because SEBI rules bar leaderless AMCs from doing so. That changed only this January when it got an interim CEO in Imtaiyazur Rahman, UTI AMC's CFO and Company Secretary.

After having a monopoly over the asset management space for decades, UTI AMC is now in danger of losing even its fifth place by fund size

The government's quest to find a successor to Sinha has been fraught with charges of nepotism and power struggles within UTI. Before Sinha's exit, a Board-level committee was set up to find a replacement. But, two key members of the committee, who were also independent directors, quit their posts soon after.

Prithvi Haldea of Prime Database, a primary market related research firm, and Anita Ramachandran of Cerebrus Consultants, an HR consultancy, stepped down from both their positions in September and October, respectively, citing personal reasons.

Sources in the know of the board-level developments say they did so because of the endless delay in finding a suitable successor to Sinha. 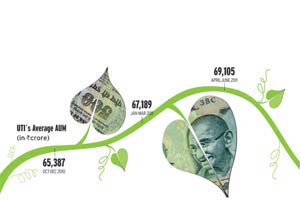 UTI's average AUM in Rs cr
Click here to Enlarge
"In the interim, the independent directors were functioning like whole-time directors and were overloaded with work. It was not sustainable for them to keep managing an organisation as large and complicated as UTI," says one source.

The government was lobbying for Jitesh Khosla, whose candidature was opposed by T Rowe Price, UTI's single largest shareholder with 26 per cent share. Khosla, an Indian Administrative Service officer from the Assam cadre, is the brother of Omita Paul, advisor to Finance Minister Pranab Mukherjee.

However, the government wields more influence in UTI, thanks to State Bank of India, Punjab National Bank, Bank of Baroda and Life Insurance Corporation, holding 18.5 per cent each in the fund house.

T Rowe Price is said to be looking to exit UTI. It picked up the stake in November 2009 for Rs 650 crore, valuing UTI AMC at about Rs 2,500 crore, or 3.25 per cent of its AUM then. By the same measure, with the AUM at Rs 57,817 crore, the investment should now be worth only Rs 488 crore, making an exit unattractive. Edward F. Giltenan, spokesperson for the firm, declined comment.

"This (Rahman's appointment) could create friction within the team. There was also talk that Jaideep Bhattacharya could replace Sinha," says a former official of UTI. Questions sent to Rahman and Bhattacharya, the fund house's Chief Marketing Officer, remained unanswered.

Given the volatility in equity markets (the Sensex lost 25 per cent) and the high interest rate scenario, investors have flocked to fixed maturity plans (FMPS) - debt funds that invest largely in commercial papers and corporate deposits - over the past year. The SEBI ban meant UTI could not launch any until Rahman took over. "That really hurt them. On the equity side there was no need to launch new funds so it didn't matter," notes an industry veteran.

The government's quest to find a successor to U.K. Sinha has been fraught with charges of nepotism and power struggles within UTI

However, Anoop Bhaskar, Head of Equity at UTI AMC, says the absence of a CEO has not impacted fund management in the organisation: "The AMC business is different from manufacturing, where not having a leader can have a major impact. What I do or my team does on a daily basis has no CEO intervention."

"They are not going to walk into the sunset. They have the strongest distribution network and a loyal customer following," says a Mumbaibased financial planner, but with competitors hot on its heels, UTI AMC had better get its house in order.