The Android Is on the Move

My first encounter with the Android, about four years ago, was strangely enough, on a netbook, not on a smartphone. This was a dual-boot device, which had Windows as well as the Android. The review I wrote, which now turns out to have been prophetic, was titled The Androids Are Coming. 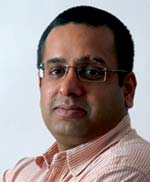 Nandagopal Rajan
Of course, Google's new operating system (OS) never really made it big on the computer. Instead, it is slowly becoming the dominant power behind the growth of smartphones. If you thought, however, that the Android OS runs only phones, you could not have been more mistaken.

The Android is busy changing our world by hopping on to more devices than you can imagine. Since it is an open source system, thousands of developers are working on taking the Android beyond the phone and the tablet. Some of this hard work has started bearing fruit.

In 2012, we saw the launch of two Android cameras - from Nikon and Samsung - that have enough brains and processing power to edit the pictures clicked within the device, and share them with other devices or on a social network. All this without any help from a computer, thanks mainly to their Android OS. A couple of years ago, this would not be possible.

Anyone who has used the Samsung Galaxy camera will tell you it is actually a large smartphone with a good camera and extra zoom. What it does is not all that innovative. For innovation, look at Epson's Moverio BT-100, a 'personal video viewer' you use like a pair of glasses and through which you can browse the Internet, watch videos online, and even download apps. It is the most innovative Android product at present, not because it brings the OS to the bridge of your nose, but because it opens up endless possibilities.

Remove the dark shades that let you watch 3D movies, and the Moverio becomes a pair of transparent eye-pieces through which you can view your surroundings and, simultaneously, a small LCD screen that streams online content. Epson is already working with test groups to see if this can be used to improve multi-tasking - like working on something new, while you also watch a demo video of how it is done.

There will be better uses for it when augmented reality comes into the picture - quite literally. Just visualise a world where you look at something and your spectacles identify it for you. Google, in fact, already has an app for that called Goggles. This smartphone app can recognise most things - take a picture of the object and the app will tell you all about it.

Google is also working on Project Glass, another spectacles-like device that uses Android to bring a smartphone-like interface right in front of your eyes. With that Glass on, it will not take long for us to turn cyborgs - always connected.

Now attempts are being made to use this OS in a range of products from light bulbs to cars. In a car, for instance, the OS will log into the global positioning system to determine location, use maps to plot routes, and change gears according to the terrain. But the success of Android and its apps is inseparably linked to net access.

So in the future you will see most new gadgets, even appliances, with at least Wi-Fi access. Some will create their own networks to interact among themselves or to be accessed by other controlling devices. Mobile gadgets will need SIM slots. And obviously there will also be security threats, hackers trying to steal the quintillion bytes of data being generated by these devices. Hopefully, there will be an app by then to save the world when the need arises.

Phablets to rule the future