There are a host of apps even for very young children, but their use should be monitored.
Nandagopal Rajan | Print Edition: Oct 27, 2013 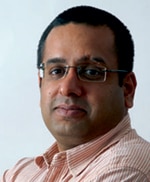 Nandagopal Rajan
My son is just over two and already knows all the alphabets, along with at least two associated words and their phonic sounds. He can also count from one to 10 and recognise the figures. The same goes for most colours and shapes. While I am proud of his achievement, I also know that there are many toddlers who know much more than him. My son, however, is self-taught.

Like most children of his generation, my son was exposed to smartphones and tablets in his crib. Earlier this year I downloaded an app for him. Starfall ABC is simple, with alphabets - both capital and small - a handful of words and their phonic sounds. I still don't know how the app managed to grip his attention, but for the first couple of months that was all he played with. As I was struggling to get used to the iPad, I added other learning apps to his collection. Among them was Agnitus, which uses games to expose children to over 20 academic skills. Soon he could push a pentagon into the hole of the same shape and pick out a black grape from purple ones.

As my son became more engrossed in his apps, gaining an American accent in the process, I became a bit worried about how much of this was actually good for him. While I had no doubt he had learnt much more than he would have done through traditional means, there was also the fear that I was exposing him to too much, too early. I brought up the topic during an interaction with Suneet Singh Tuli, the man behind the very affordable Aakash tablets. The CEO of London-based DataWind, which produces wireless web access products, thinks the tablet can be a great academic tool as it delinks motor skills from learning.

"Earlier children learnt alphabets only when they could write out the same, and this delayed the process by at least a couple of years." I could only agree with this logic, having seen it at work.

Some surveys show that over 81 per cent of toddlers have an online presence by the time they are two. Hundreds of developers have realised the potential of this and filled stores with apps for children of all age groups. I always think the price of an app is based on its utility. If that is any indicator, a large chunk of the apps for children are paid ones.

But with the proliferation of tablets and smartphones, there are millions of parents globally wondering if they are bringing up a generation of technology-addicted - or even worse, technology-dependent - kids. Many articles have been written and debates held to figure out the impact. The jury is still out.

However, though I am thankful to technology for having taught my son so much, I have started limiting his access to devices. And not because they are bad for him, but because he needs to find time for other stuff those his age should be engaging in. After a recent debate on the topic, Intel, the leading American semiconductor chip maker, put out some tips for "confused" parents. Here are a few:

- Assign a time when they (the children) can access technology
- Give them variety with new apps
- If your child is exposed to technology, make sure you know more about it than he
- Make sure kids know there are things they are not supposed to do
- Do not consider the device a babysitter

Apart from these rules, make sure you always monitor your children when they are handling a connected device. It takes just a couple of clicks to go to YouTube and encounter stuff they aren't supposed to. For children accessing the web from a PC, it is better to restrict them to browsers such as KidZui, Pikluk and KidSplorer that provide a sanitised and safe web for them.

For coming generations, technology is going to be an integral part of life. Just teach the young ones how to live in harmony with it.
Tags: Apps for children | Kids apps | Apps for learning

How to measure your social media impact