Think Out of the (Mail)Box

Email is evolving, especially to meet the needs of smartphone users.
Nandagopal Rajan        Print Edition: May 26, 2013

Electronic mail, or email, may have evolved in the last two decades, but the overall experience of using it remains more or less the same. Lately, however, there are signs of change, driven mostly by the arrival of mobile devices. Octane, a market research firm, says people accessing the Internet on their mobiles and tablets mainly do so to send emails, or check out social networking sites. Their requirements from email service providers are different from those using PCs. 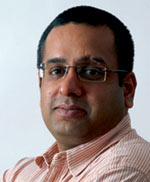 Nandagopal Rajan
Perhaps as a result, many new apps now provide out-of-the-box solutions to email. I recently downloaded an iPad app called Cloze, which calls itself 'mail with a human touch'. Instead of the regular inbox and sent folders, this app sorts mail into 'key people', 'other people', 'bulk mail' and the like. People with whom you interact the most - on mail and through social networks - are put in the first category, while those who don't mail you often are in the second. Thankfully, the large chunk of daily emails in the form of Twitter and Facebook updates, find themselves in a separate bulk mail folder. A section called 'Losing Touch' includes mails from people you do not keep in touch with regularly.

Cloze also presents mail in a magazine-like format where you have tiles of previews instead of just headers for each mail. Incredimail, another mail app, does this even better. If you have used news aggregators like Zite, you get the idea. It is a much simpler and more natural way of browsing, especially sifting through bulk mails. The previews make sure you know what the content is at one look, without actually opening the file.

While Google is still the gold standard for email, it has not been able to radically change mail ever since its launch around nine years ago. The other problem with Google is that most of us have exhausted our storage limits on Gmail. Of course, you can buy more storage, but that comes at a steep cost.

All is not lost, though. Old favourites like Hotmail and Yahoo!, which saw mass migrations once Gmail became the default primary mail for the world's connected, have now started reinventing themselves. Hotmail has changed its look as well as its outlook and is now called Outlook mail.

Inspired by the Windows 8 design, this mail service has the neatest interface around. If you want a no-nonsense, ad-free mail that is clean enough to increase your productivity, then Outlook is for you.

Yahoo! has not changed its look much, but now comes with a 'large heart'. If you need to send and receive large files all the time, this is the mail solution for you. As if the ability to send 100 MB files as attachments wasn't enough, Yahoo! has now added cloud storage integration with Dropbox. During a recent telephonic interaction, David McDowell, Senior Director of Product Management for Yahoo! Mail, told me they were striving for a mail service that was faster than at present, and provided a consistent experience across devices.

Yahoo! Mail has over 330 million users globally. Over 105 million people access Yahoo! Mail daily, with more than a tenth of them from India. Outlook and Hotmail together have around 420 million users. Gmail, however, is still on top with around 425 million users. And with these one-billion-plus users increasingly dependent on their mobile devices to access mails, don't be surprised if these services completely change tack in tune with the times. It is only a matter of time before easier integration with other web services, unlimited storage and better interfaces become the norm.

Till then, however, you will have to learn to manage your mail account best as you can and stay above water. An easy way to do so is to have separate mail accounts for different uses or profiles. One for communication with the family, one for the office and one just for yourself. Or just a second backup mail where you keep sending, or CCing, important files. Yes, a problem of plenty, in every sense.

One-piece PC may be the rage soon