So you bought yourself that fancy high-definition LED flat panel display this Diwali. Sales were so good that direct-to-home satellite TV providers ran short of high-definition set-top boxes. Now that you have your fancy new TV, how about buying a video game console to go with it?

Kushan Mitra
You might worry that your children might spend far too much time in front of a console and become digital zombies. We do not have a solution, other than to say that a game console is not just for children - most of the better game titles today are aimed at an older audience.

The second worry you might have is that by spending time pretty much motionless in front of a television, your physical well-being will suffer. But this is an unwarranted worry with the latest generation of consoles. The Nintendo Wii console has brought about a massive change in the way gamers interact with consoles. While some of the most extreme gamers may still prefer the old joypad or play games on a computer using a keyboard and mouse, casual gamers have flocked to the Wii in droves thanks to the ease of playing games on that console. Instead of pressing buttons and triggers, gamers have to wave the Wii's controller (the "Wiimote") around.

The spectacular success of Wii has forced the other two game consoles in the market to copy the Wii's strategy. Sony has modified its PlayStation3 with the 'Eye' camera and 'Move' controller, which come as an add-on pack for the console at Rs 3,650 though standalone controllers are not yet available. However, while Sony has replicated the Wii, Microsoft has taken the concept a lot further with the Kinect. 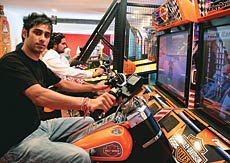 Old school gaming
Why so? Simply because Kinect does away with the controller completely, you wave your hands or jump around, the camera captures that motion and translates it into action on-screen. While Microsoft has commercialised it, the underlying technology was developed by the Israeli military-industrial complex and further developed by Israeli company PrimeSense. The Kinect will be available in India soon at around Rs 8,000 as an add-on to any Xbox 360 console.

The rapid advances in interface technology over the past three-four years have transformed the way we use devices. The adaptation of the touch interface has changed the way we use mobile phones and made Steve Jobs an icon for technology acolytes. The Wii has helped Nintendo, which has far less money than both Microsoft and Sony, win the first part of the current-generation console war.

More importantly, Apple's success is making a variety of manufacturers adopt its touch technology as the primary interface for mobile devices and tablets. Microsoft, which is now rarely spoken about in the same breath as Apple as a technology innovator, could lead the transformation of how we interact with larger screens in the future.
TweetYoutube