With the advent of the personal movie viewer - Epson's Moverio BT-100 video glasses and Sony's HMZ-T1 3DTV headset - video moves into private territory. These devices allow you, and you alone, to enjoy a movie. No one can peer over your shoulder, as they could if you were watching something on a computer, a portable media player or even a TV, and find out whether Judi Dench ceases to be M as the credits roll in Skyfall. Well, video took its time to enter the realm of me-only entertainment. Music, in comparison, trod the ground way back in 1979 with Sony's Walkman. The Japanese giant's hugely popular audio device converted music from a collective experience where everyone heard what you were listening to into a secretive, personal indulgence. 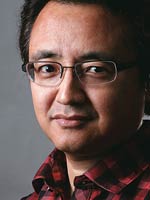 Joel Rai
Audio and video - two of our most basic pleasure tools - have never developed in tandem. The phonograph came in 1877, almost two decades before the cinematograph. Radio (1895) was three decades earlier than TV (1925) and the tape recorder was being used decades before the first camcorder became available for general use in 1983. The audio sector has innovated at a pace that has scorched the entertainment highway. From integration with other devices (remember that craze about phone ringtones and song downloads when video seemed nowhere possible on your mobile handset?) to storage media (from spool tapes via cassettes and CDs to pen drives) and formats (MP3 is near synonymous with music files), audio has strode ahead much more decisively than video. And before 3D cinema became mainstream, the 5.1 channel sound system had long held pride of place in homes. The 5.1 channel audio set-up had five speakers placed in strategic locations - centre front, right front, left front, right behind and left behind with a subwoofer - to approximate the way sound waves travel for a natural creation of audio stimuli.

However, even this handsome surround sound creator has fallen in the quest for a better aural experience that also avoids the cumbersome arrangements of speakers and wires. Enter the sound bar. Early attempts, from 2005 onward, to congregate the various speakers into a single unit have proved fruitful and the technology has now moved on quite amazingly. In its latest YSP-4100, Yamaha, a major purveyor of music players, for instance, has been able to incorporate incredible 7.1 channel music-making abilities into a single rectangle that takes up just a smidgeon of acreage.

The array of tiny speakers within project audio waves with such angular precision that you get an immersive cinema hall experience. The humongous-by-comparison, 5.1 system required careful placing of five speakers at correct angles so that the sound waves intersected in the room precisely ("sweet spot") to create a surround sound effect. The latest sound bars achieve this without fuss. Not only is the sweet spot a more expansive area, but you can actually calibrate the various sound inputs according to your preference - all at a price of under `90,000 for a piece like the YSP-4100.

What is more, today you are tuned in to the world. Docks - which converted iPods and iPhones into speakers systems - have now gone high-fidelity and sport Bluetooth connectivity to access streamed music on the Web or those stored on a smartphone. So, between the tinny, jarring sounds emanating from cheap music players and mobile phones and the acoustic integrity of highend audio systems lies the home music player. But with technology catching up, these domestic machines are not a compromise - they represent sound thinking.