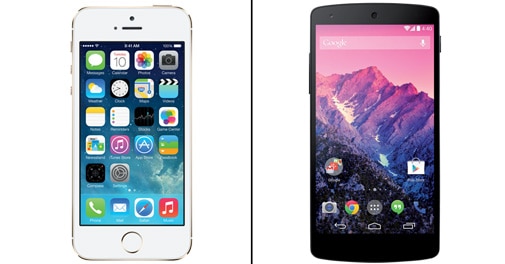 Usually, we compare devices only when they are in the same price category.But here the competition is between the two flagship smartphones coming from the leaders-Apple and Google. The iPhone 5S is priced at a premium, the Nexus 5 is cheaper. But here is a quick comparison of the two.

Design: The Apple iPhone 5S continues with the same design as the iPhone 5 but it still feels different. The metallic ring around the home key makes it look better. The case holding it isn't any different from that of the Nexus 5 either. The display is slightly larger, but the cut remains the same. Google has replaced the earlier glass back with a soft matte material for the Nexus 5. Both are comfortable to hold. But the iPhone 5S stands out as an Apple device, while the Nexus 5 looks like just another Android phone. Winner: Apple iPhone 5S

Display: There is a distinct difference in the display of the two devices. The iPhone 5s has a 4 inch display. It looks good for this screen size. But the Google Nexus 5 has a bigger 4.95 inch display with 1920 x 1080 pixel resolution. The Nexus 5 offers a better experience while browsing the web, watching videos or even playing online games. Winner: Google Nexus 5

Performance & User Interface
Apple has been boasting about the A7 chipset supporting 64 bit architecture on the iPhone 5s. While there are not many apps that can utilise this architecture, the performance is smooth and quick. There wasn't a single moment when the phone seemed slow. But so too there wasn't any lag on the Nexus 5. The quad-core processor with 2GB RAM is perfect. On the UI front too, the iOS 7 brings the much needed shotcuts to settings including Wi-Fi, Bluetooth, etc. The Android KitKat comes with a few tweaks that don't change the experience much. Winner: Tie

Camera: Both the phones pack an 8MP camera. The setting options on the iPhone 5S are fewer than on the Nexus 5. But talk about the image quality and the iPhone 5S is the winner. Be it the HDR mode or the dual flash that evaluates how much light is required, the images appeared better. iPhone 5S was quick to lock focus too. Nexus 5 sometimes failed to lock the focus. Winner: Apple iPhone 5S

Storage: Neither smartphone supports the expandable memory card slot. The units we are comparing here are the 16GB variants. Apple's iPhone is available in three capacities - 16, 32 and 64 GB,whereas the Nexus 5 has two variants - 16GB and 32 GB. Winner: Tie

Apps and Apps Store: Even after so many years, Apple has the best apps offering under its App Store. All the apps are closely examined before uploading on the store and hence are safe to use. With Android, there are a lot many fake apps that make the Android smartphone vulnerable to virus attacks. Winner: Apple iPhone 5s

Battery: Both smartphones have a non-removable battery that lasts a day on above average use. Winner: Tie

Verdict: The competition is close but the iPhone 5S emerges the winner. But that doesn't mean that the Nexus 5 isn't a good device.

Gadgets to look forward to in 2014