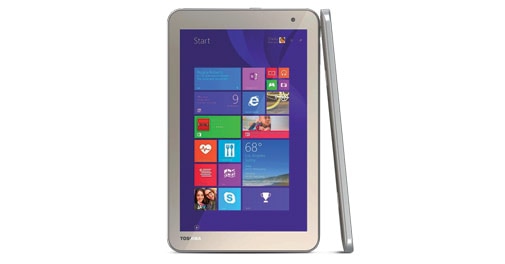 An 8-inch Windows 8 tablet
Toshiba has launched an 8-inch Windows 8 tablet in the Indian market. Running on Windows 8.1, it is powered by Intel Atom Processor Z3735G and has got 1 GB of RAM along with 32 GB of internal storage. The tablet has got a 1280x800 pixel 10-point touch display. It has got features such as Dolby Digital Plus and comes preloaded with apps like Xbox Music and Video, Kindle Reader, Skype, and a one-year subscription to Office 365. The tablet measures 9.48 mm and weighs 385 grams. The USB data and Charge Y-cable are bundled along with WT 8.
Price: Rs 15,490 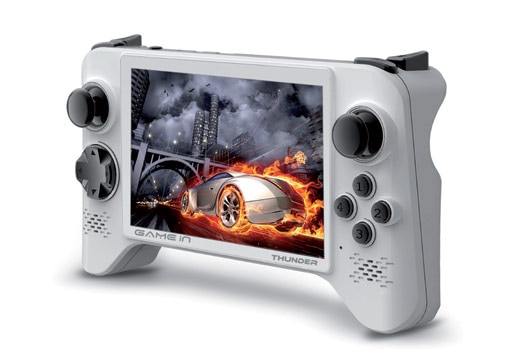 Google Chromecast
After a long wait, Google has finally launched its Chromecast in the Indian market. This is a small thumb shapesized device that can be plugged into the HDMI port of a flat panel TV. It allows users to stream content from video services like Hulu, Netflix, YouTube, and content from Google Play. However, the former two does not work in India. In India, Chromecast currently supports YouTube and Google Play Movies, as well as apps from partners like Eros Now, Spuul and YuppTV.
Price: Rs 2,999 Logitech Type Plus
Logitech has launched a new protective case with integrated keyboard for the new iPad Air 2. This case protects the tablets from accidental bumps, scratches and spills. The keyboard is Bluetoothenabled and connects to the iPad Air 2 over the same technology. It has also got an automatic on/off feature, where, when the iPad is positioned upright, the keyboard turns on. When close, it turns off. There is also an auto-wake and auto-sleep feature that turns the iPad off when you close the case and wakes it when the case is opened.
Price: Rs 6,495

Tata Docomo - Create Your Own Number

Tata Docomo - Create Your Own Number
Tata Docomo has announced a unique service, 'Create Your Own Number' under the campaign 'It's my life, it's my number'. Existing and new subscribers can walk into any Tata Docomo brand store to create their own 10-digit mobile number depending on availability, basing it on their birth dates, favourite numbers and more. The company hasn't detailed additional charges for the customised number, if any.

Genius Life-Shot FHD300 mini camera
Genius has come up with a mini camera that can be used to capture time-lapse videos while walking, running, riding a bike, in the rain and even underwater. The camera has a built-in Wi-Fi feature that lets you connect to your smartphone to transfer videos and photos. There is a Genius Life-Shot App available for Android or iOS smartphone. The camera features an 8 MP Sony sensor. It comes with a bike mound, tripod mount, clip strap, USB charging cable and a waterproof case with IPX8 certificate.
Price: Rs 13,000 A 2.1 multimedia speaker
iBall has now launched a 2.1 multimedia speaker, the Nightingale K9. It has a full wood encased woofer with two satellite speakers and a host of other utilities with its full function control on the remote control. It packs in a 48 watt peak power output. It supports USB, SD and AUX input devices. It measures 10(W) x 15 (H) x 9(D) cms. The speaker is equipped with a four-inch driver in the subwoofer and a three-inch driver in the satellite speakers. One can also save favourite FM channels.
Price: Rs 2,599
TweetYoutube
Tags: Toshiba WT 8 | Mitashi Thunder Series | Google Chromecast | Logitech Type Plus | Tata Docomo | Genius Life-Shot FHD300 | iBall Nightingale K9 | Camera launch | Android | Windows 8 | Tablet