Good, But Not the Best

It has got a curved edges and the rear has got a soft touch finish. The rear is nonremovable and the dual SIM slots along with the memory card slot are hidden under the band. 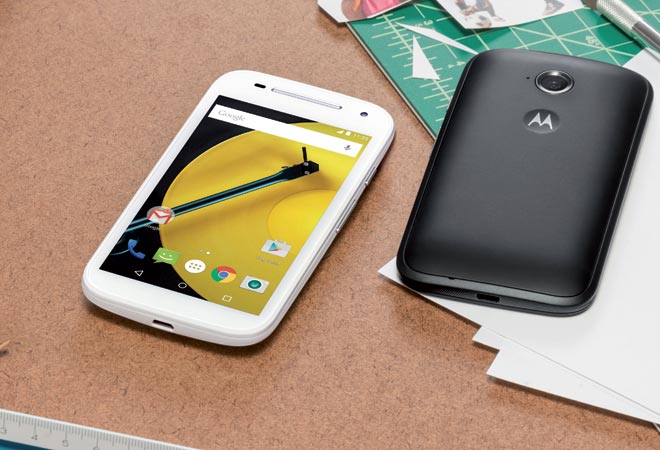 Plus: Price, Minus: Performance

Moto E, when launched last year, turned the sub-Rs 10,000 price segment upside down. The company has now announced the upgrade with an improved design and hardware. The design looks very similar to Moto X (2nd Gen). It boasts a 4.5-inch screen with 570x960 pixel resolution, which is crisp and offers good sunlight legibility.

It has got a curved edges and the rear has got a soft touch finish. The rear is nonremovable and the dual SIM slots along with the memory card slot are hidden under the band.

As the phone is available only in black or white variant, Motorola allows you to change the 'band' with a coloured band (available in golden yellow, turquoise, blue, raspberry, purple and red) that makes the Moto E look cool.

The Moto E is powered by a quad-core Snapdragon 200 processor clocked at 1.2 GHz and is paired with 1 GB RAM. It runs on Android Lollipop (5.0.2), which makes it one of the few devices running on this operating system (OS). Thanks to the OS, the three capacitive touch icons have got geometrical design - triangle for back, circle for home and square for multitasking.

It has got plain vanilla interface. The multiple running apps too appear differently and can be closed just by sliding. When used for the first time, it asked me to add a Google account. Once done, it showed me the options such as Assist, Action and Display. Under Assist, I can select my sleep time and during those hours, the phone will be on silent mode and the screen will be off. Similarly, when in meetings, it shows the option of

Auto Reply to missed calls using a personalise message. The Action setting automatically turns on the camera when the wrist is twisted twice. The Display showcases the notifications even when the phone's display is off. There is an option to hide the notification details and only show the notification icons.

Motorola has increased the onboard storage to 8 GB, of which 5.03 GB is user accessible. The 5 MP rear camera with tap-to focus does a decent job. The overall performance, too, is pretty decent, but I felt some lag while launching the apps and switching between the running ones.

Bag it or junk it: While it justifies its price, it loses the battle to Micromax's YU Yureka that costs Rs 9,999