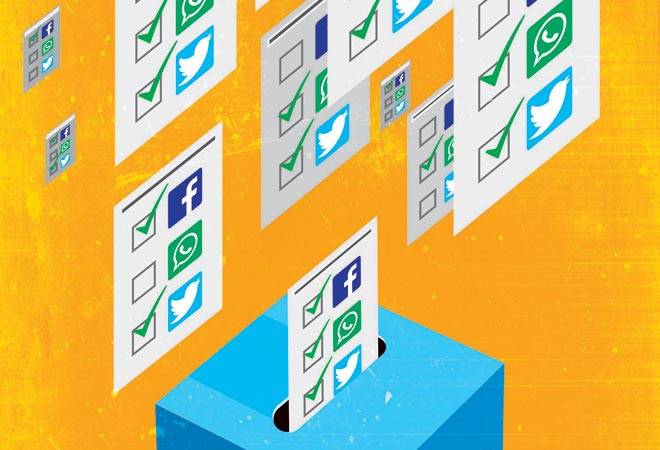 Be it #SelfiewithModi or #MufflerMan, political campaigns on social media have always managed to stir up a storm. The latter started as a mud-slinging campaign against Arvind Kejriwal, and was turned into a meme by Aam Aadmi Party's social media team to announce his 'return' to end corruption. This was in November 2014, before the impending re-election next year, his abrupt exit as the Chief Minister of Delhi after a 49-day stint still afresh in people's minds.

Twitter was abuzz with pictures of #MufflerMan dressed as Spider Man, Bat Man, and Super Man, with the trademark scarf and broom in tow. It became the top political hashtag on Twitter in 2014. AAP managed a sweeping victory. And social media, too, emerged as a winning platform for political campaigns. Much more than brands could hope for.

It helps that politics is the most talked about topic on social media. That BJP's Facebook account has over 10 million followers, Congress's over four million and AAP's nearly three million is proof. Hashtag wars between political parties set the trend on Twitter almost every day. WhatsApp, too, is flooded with political memes. However, brands, despite the investments they make, have not been able to harness the power of social media to a great extent. What gives?

According to experts, politics has an emotional connect with the audience, which a brand evidently lacks. "The brand is trying to sell you a product or a service, but a political campaign connects on an emotional level. So the kind of traction you get is always much more," says Hareesh Tibrewala, Joint CEO of Mirum India.

A political campaign also has more hands on deck in the form of 'volunteers'. Consider AAP's three-tier social media team, for instance. Ankit Lal, the party's IT head, who headed its social media team from 2013 to 2015, informs that a core team of 30 is responsible for strategising. "The next layer, a team of 200 volunteers, supports the core team and executes the strategy, while the last layer of 5,000 volunteers ensures that the message is disseminated far and wide."

Brands, too, need to build such a cohort of advocates, says Tibrewala. "The power of social media is in identifying people who really believe in the brand, create an army advocates, and keep engaging with them," he adds.

Lal chides brands for "not having any vision at all", and merely looking at short-term benefits. "Brands see people not as audience but as customers, and fail to humanise stories. Only when people are attached to a brand emotionally, will they talk about it as passionately as they do about politics," he says.

Another aspect that brands can learn from political campaigns is responding in real time - leveraging the moment and engaging with the audience. Topical, tactful advertising can grab the audience's attention far better than direct marketing methods. In fact, some of the most effective marketing campaigns on social media are either engagement-driven or revolve around a real-time event.

Ahmed Naqvi, CEO & Co-founder of digital marketing agency Gozoop, has been involved in the campaign for a major political party for the upcoming Uttar Pradesh elections. He says that there is a world of difference between a political campaign and a brand campaign. "Political campaigns are more action-packed. It changes with the pulse of the audience. So you have to craft the campaign on a very real-time basis."

Naqvi believes that apart from being on their toes and focusing on the moment, marketers need to encourage user generated content, and have an opinion or a stand on matters, like political parties, to forge a connect with their audience on social media.

Average number of hours spent using the internet per day, split by computer use and mobile phone use (survey based) 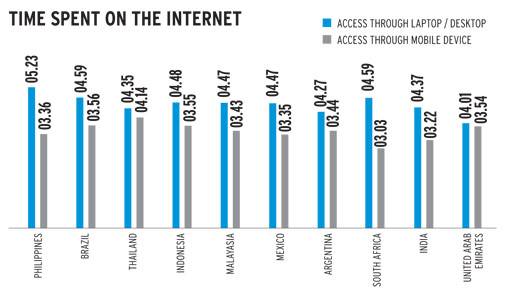 Image sharing and social networking app Instagram has commenced a live streaming feature for the US and UK; and will launch it in other countries, including I ndia, soon. To go live on Instagram, users need to swipe right on their feed and choose Start Live Video. However, unlike on Facebook, the story will disappear from the app after the live streaming ends. Facebook archives the live streaming videos and users can watch them later. To watch someone else's live stream, users need to go to Top Live option on Explore, and choose from the list. To use this feature, users have to upgrade their apps to Instagram version 10.0 and above.

YouTube has introduced an in-app messaging feature on its app for Android and iOS versions. The feature, which the company has been testing since last year, is currently only available in Canada. Google's Product Manager Shimrit Ben-Yair told technology website TechCrunch that Canadians share 15 per cent more videos than an average user. It will eventually be rolled out globally, too. The feature is quite similar to Facebook Messenger, and allows a user to share links of videos besides messages. YouTube has introduced the feature to encourage people to talk about and share videos on its platform, instead of on social networks such as Twitter and Facebook. Though YouTube has a huge community, the absence of the sharing feature makes people move to social media networks.

Get A Shade Smarter