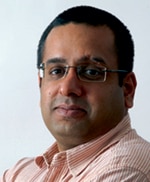 Nandagopal Rajan
If Facebook was a country it would have the third-largest population in the world at 1.15 billion, behind only China and India. A nation without borders, Facebook, which boasts 82 million users in India, is spread globally and growing with every passing day. Besides the Facebook junkies, there are now brands that take this social networking site very seriously, engaging with customers and reaching out to new ones. According to leading Czech analytics firm Socialbakers, in India, Vodafone Zoozoos and Tata Docomo have the most popular Facebook pages with over 12 million fans each. It is easy for larger names to garner this support and fan base, but have small businesses also started exploiting the potential of Facebook?

"Every business wants to kick-start word of mouth and Facebook is word of mouth in scale. Someone you know and trust recommending a product has much more worth and effect than any advertisement and Facebook lets you leverage those connections," says Sachin Rao, Country SMB Manager, Facebook India, explaining the merits of having a Facebook page.

A page gives regular analytics of who is visiting and when. Plus, you can target a post to a particular set of people, a person who likes your products and his/her friends' circle, whose members in all likelihood will have similar tastes. In fact, for small businesses on shoestring budgets, Facebook promoted posts or advertisements don't cost much. "They could spend as little as $5 a day. And even that is performance-based with no upfront payments needed," adds Rao.

Many small Indian businesses are already thriving on the social boost they derive from Facebook. Take the case of Bangalore-based Nikita Dawar and Nivedha Charles. The two classmates dropped out of their fashion designing course at the National Institute of Fashion Technology and, as a hobby, started Pigtails and Ponys to sell hair accessories such as hair bands and clips in 2011. Since funds were limited, they started a Facebook page to keep friends posted about their new creations. Two years on they have an e-tailing site, but about 70 per cent of the business there is still routed from their Facebook page. Dawar says they spend an average of Rs 5,500 a month promoting new posts on Facebook and this brings in new customers on a daily basis. They now have over 32,000 likes, which translates as a captive audience from a business viewpoint.

Rao says a Facebook page can also provide an instant mobile marketing strategy with a visually rich experience across screens, even those of feature phones. Then you have Android and iOS apps that let you manage pages and create posts even on the move. As I explained in an earlier column (businesstoday.in/biz-websitetips), setting up conventional and mobile pages has become cheap and easy, but it can never be as easy as a Facebook page.

Small businesses could also have a Facebook-only strategy, at least till they achieve a certain amount of scale. Since it helps them target audiences in a certain demographic or with a certain interest, this money is not wasted on random targeting, says Rao. You can even add a third-party payment gateway app to the Facebook page to build a full e-commerce solution, or just drive users to your own website with its own shopping cart.

It would, however, be wrong to think that spending a few dollars on Facebook alone will boost your business. A page would also come with the added responsibility of being there to engage with your customers. The virality of social networks can be damaging if your product is not up to customer expectations. Complaints will show up on your wall and you will need to deal with them publicly. Do it well and that will be a big 'like' button on your business.
TweetYoutube
Tags: Social networking | Social networking sites | small businesses

All about noise cancelling technology