Near Field Communication, or NFC, is a promising technology. But it hasn't really taken off in the mobile space. Increasingly, smartphones are getting NFC but not much can be done using this connectivity option. Here are three NFC-based music players from Sony:

The Sony SRS BTV5 is a good mobile companion. This small, tennis balllike speaker doesn't weigh even as much as a pool ball. It has the speaker side covered with a raised bridge which also hides the NFC chip. Along with the wireless options, there is a USB for charging and an audio in port. The volume controls are placed next to this, while the on/off toggle switch is at the bottom.

But the performance is not as good as the design. We tested the speaker with the Google Nexus 4 smartphone and were paired and ready with a tap on the top. The sound quality was good enough for a small room. Also, it was wasn't very clear and lacked bass. The equaliser settings didn't improve the quality significantly.

The good thing is that the speaker can be used to answer calls as well. Although the audio in calls was significantly clearer, it was still not loud enough.

BAG IT OR JUNK IT?
Average performance but the portability factor works for this speaker 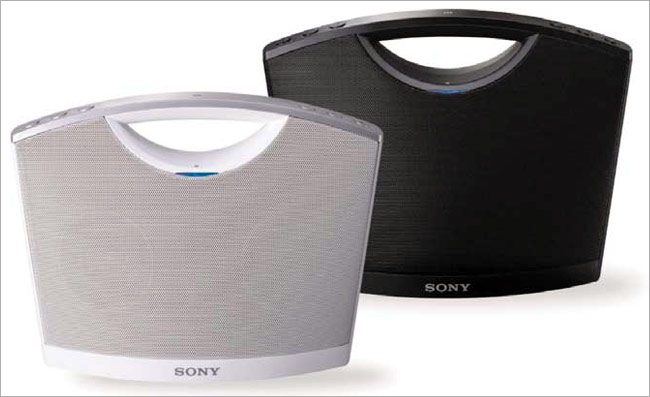 With a handbag-style design, this speaker has portability written all over it. On the centre of the glossy handle is the NFC logo with three buttons each placed on both the sides. On the left there is power, pairing and pause buttons, while the other side has a calling key and volume controls. Although it looks heavy, this speaker is quite lightweight.

Technically, the speaker should be instantly paired with an NFC enabled smartphone. But when we tried reviewing it with the HTC One, it didn't. We had to manually turn on the Bluetooth mode and connect it. But next time when we turned on the speaker with music playing on the paired phone, the speaker instantly connected and started playing the music.

However, unlike its smaller cousin, the BT M8 has really impressive sound. It was not only loud, but also clear. The audio quality is good enough to add life to a party in a small room, moving car or even at any outdoor location.

The speaker can be powered using an AC adapter and has dry cell slots too in case you want to take this for a picnic. Depending upon the batteries used, the speaker can give a playback of up to 20 hours.

BAG IT OR JUNK IT?
Good value for money if looking for a portable speaker. The BTY 52 is the biggest and the most powerful of the three NFC speakers launched by Sony. While the other two were restricted to playing music from a Bluetooth enabled device, this one comes with a host of connectivity options. So there is a USB port on the front as well as builtin FM radio and audio in port.

With a look that could remind you of something that came out of Star Wars, the device has two big 2.5W speakers flanking the control panel and display. The handle has the NFC chip, while the top panel has all the buttons including the power key and music controls. There is also a volume rocker surrounded by source buttons. A play mode key, tune key for searching folders and display key bring added functionality. The strip light on the handle syncs with the music, but can be turned off if needed.

Despite the host of controls, the BTY 52 isn't complicated to use. While the sound was impressive on Bluetooth and USB, there was some distortion on the FM Radio. Adjusting the antenna, didn't make much of a difference. Sony has also added a mega bass mode that manages to increase the bass and make a huge difference in terms of the audio output.