This new species of AI-powered voice assistants could build deep emotional connectivity between humans and machines. 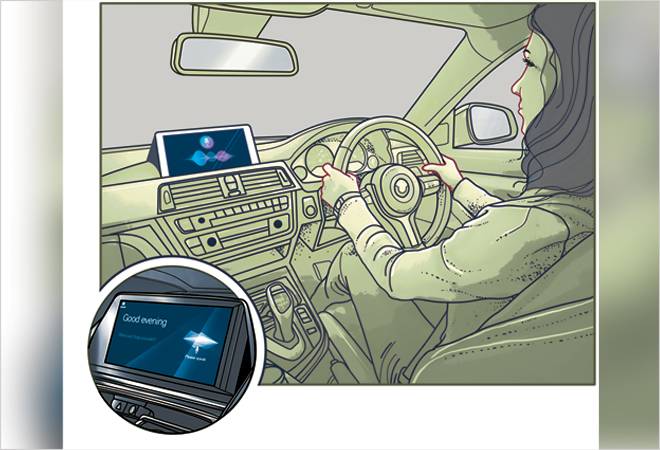 Imagine this. You spot a beautiful locality while driving your car, but instead of checking the location on your map or tagging the place, you simply ask your car's voice assistant what this place is and get accurate information in real time.

Similarly, you simply look at one car window and ask the assistant to close it, and it will do so by tracking your movement. From closing the sunroof to adjusting cabin temperature, from identifying in-car warning signals to displaying relevant information in real time on a car's windshield - all these and more will be part of your experience when you have a car-compatible, voice-powered assistant riding with you. None of this is far-fetched sci-fi stuff. Innovators and car manufacturers are working overtime to usher in tomorrow's technology at the earliest.

Voice tech in cars has been around since 2004 when IBM and Honda Motor came up with an in-vehicle speech-recognition system. A decade-and-a-half later, the use of voice assistants in vehicles has simply skyrocketed as smartphone owners are mostly using Apple's Siri, Amazon's Alexa and Google Assistant. But there is more to it. From March this year, the BMW Intelligent Personal Assistant will be rolled out in select countries. The onboard voice assistant will explain and activate all sorts of car functions such as switching on high-beam assistance, providing information on current status (oil level and so on), giving fuel-saving driving tips and warning drivers if required.

Swedish luxury vehicle company Volvo Cars is also embedding Google Assistant, Google Maps and other Google services into its next-generation Sensus infotainment system. It will enable customers to use voice commands to control in-car functions such as adjusting air conditioning and heating, playing music, navigating and even send messages by speaking to the Google Assistant. The integration of Google Maps will keep the driver informed about traffic, estimated travel time, the best route to follow and alternative routes in case of a snafu. In the upcoming Polestar 2 EV sports saloon, the yet-to-debut Google HMI (human-machine interface) will assist drivers and execute tasks using the car's LTE connection, a 4G wireless communication standard.

Switzerland-based Luxoft, a global IT services provider, and Daimler AG have also come together to develop Mercedes-Benz User Experience or MBUX. This infotainment system is built around customised user experience and uses integrated artificial intelligence (AI) and augmented reality (AR) to create an emotional connection between a Merc and its driver and passengers. Besides new and upcoming models, this feature will be available in a few old cars when they undergo digital upgrades.

Aiming to reinvent the human-technology relationship, US-based Nuance Communication has developed its Dragon Drive platform for delivering an in-car AI experience. It offers a more humanised mobility assistant that uses fluent, conversational English. At the Consumer Electronics Show held in Las Vegas in January this year, Nuance showcased a number of innovations such as emotion-detection technology, enhanced multimodal and AR interactions and advanced conversational capabilities. Simply put, the company says that eye-movement tracking, combined with voice recognition, can be used for interaction with points of interest outside the car.

The information, highlighted in AR (information overlaid on real-world environment), will be displayed on a smart windshield without compromising on visibility. Moreover, head-movement tracking, combined with voice recognition, will enable in-car controls. Drivers will be able to converse with the assistant just like they would with a human for follow-up commands and queries. The assistant will also use artificial emotional intelligence and interior cameras to analyse facial expressions and voice tones so that it can understand the driver's and passengers' complex emotions and cognitive states such as drowsiness and distraction.

Initially, most of these features will only be available in luxury cars. But there are some aftermarket gadgets which can bring part of the smart functionality to your existing cars. For instance, Amazon Echo Auto (priced at $49, but not yet launched in India) is a compact device that sits on the dashboard, connects via the Alexa app on your smartphone and plays through the car speakers. Other than taking calls and setting reminders, it can be used to play music, check news, open the garage door or turn on air conditioning/heating/lights at home before you reach there. Echo Auto uses the Internet connectivity of the smartphone with which it has been paired to communicate with compatible smart devices.

You will also find third-party accessories such as VIVA, released by Roav, a sub-brand of the tech accessory maker Anker. This Alexa-enabled two-port USB car charger acts like Amazon Echo after it is set up, performs similar tasks and makes your car smart.

It can be purchased for Rs 10,999. One can also go for Logitech ZeroTouch, a hands-free car mount and voice assistant app with Alexa for Android phones. Priced at Rs 4,000, it can be set up with the ZeroTouch app for accessing some of the features mentioned above. Google is also working with Anker for the Roav Bolt car charger that can be plugged into a car's socket so that your phone can be connected to the car's stereo via Bluetooth or aux. Users will be able to access Google Assistant hands-free, without having to unlock their phones.