The author of this thoroughly entertaining and thought-provoking book points to all that is wrong with the way we measure growth. 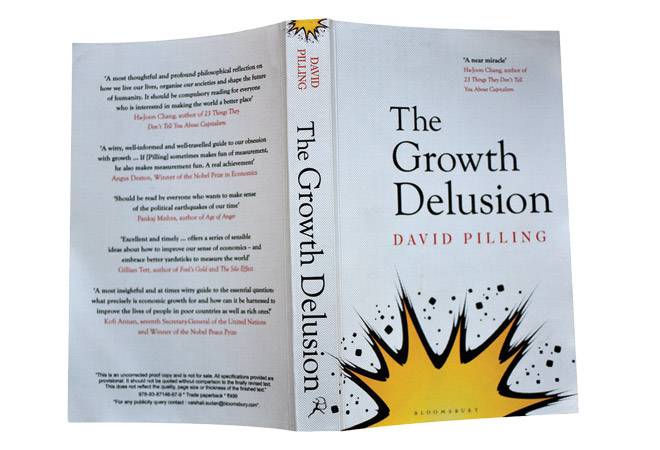 Let us just say this is not a book that will gladden the hearts of the finance ministry mandarins. After all, India's economic policymakers take great pride in the fact that the country is projected to be the fastest growing major economy in the next decade. And we will probably grow faster than China for the next 10 years or so. But David Pilling's thesis is that GDP is outdated and flawed, and that economists and countries should now junk it.

Pilling is no economic dilettante. He has reported on economic affairs for 25 years from across five continents and is currently the Africa editor of Financial Times. He has researched his topic thoroughly. Pilling points out that in the early days of reporting, he "taught himself how to compare every number to GDP and to mention it in every possible article - to lend a bit of gravitas." But over the years, he realised that seeing everything through the prism of GDP growth was distorting our view of what is really important, and hence this book. He combines deep scholarship with witty writing to bring out a thoroughly entertaining and thought-provoking volume.

Pilling starts off with the origins and subsequent refinements of GDP (and of trying to measure the national income of a country even before GDP was created). He talks about how Simon Kuznets invented the GDP at the behest of Franklin D. Roosevelt, the then US President. However, GDP soon took on a life of its own, and it started measuring all the things that Kuznets had tried to keep out of it. (Among other things, he wanted to exclude defence spending.) In fact, it was the work of John Maynard Keynes that influenced GDP more because the British economist argued that government spending be included in the measurement of national income - a revolutionary idea at that time. Pilling says that although Kuznets is credited with the invention of GDP, he was never very comfortable about the way it turned out - and the way GDP is measured currently probably owes far more to Keynes than to Kuznets.

Pilling's problem with GDP are many. The two biggest ones are: it measures both good and bad production and adds that to the overall GDP number; and equally, it does not measure all sorts of things that are important to a nation and its citizens. Take the first one. In the UK, Britain's Office of National Statistics, in 2012, set about estimating the number of prostitutes because earnings from prostitution would add to the GDP, as would drugs like cocaine and heroin changing hands. Wars would be good for GDP, especially the effort of reconstruction after a war. A hurricane destroying homes would also be good because of the rebuilding that would follow. On the other hand, GDP would not count housework. The obsession with GDP growth also invariably promotes all sorts of industries that contribute to pollution and destroy the environment, and also encourages senseless consumption.

The second issue is that GDP does not measure aspects like quality of life or inequality; it does not actually reflect the well-being of a country. A nation with a handful of extremely rich people while the rest live in poverty would not be captured in GDP measurement. But if GDP is not the answer for policymakers, what is? In the last part of the book, Pilling explores alternate measurements - from the Genuine Progress Index to the Happiness Index to the Human Development Index. None of them are perfect, but they try to capture dimensions of well-being better than GDP.

As an Indian business journalist, I am not sure that our government (or any other) can dispense with GDP altogether. But I agree with Pilling that other indices need to supplement GDP - the Happiness Index and the Inequality Adjusted Human Development Index might be good to add immediately. Many developed (and even developing) countries are focussing on happiness and other emotional needs. Britain has recently appointed a minister for loneliness. India could adopt some of these ideas.