From media consumption devices to computer alternatives, tablets have come a long way. Tablet computers, or tabs, might not have killed off your desktop/laptop yet but they are evolving fast. Tabs today feature robust computing power, longer battery backup, a world full of productivity apps and compatibility with useful hardware such as detachable keyboards and styluses, making them an ideal workhorse.

Take, for instance, the Microsoft Surface Pro tablet, running the familiar Windows OS. It features the same desktop-like OS and user interface and can download and work on MS Office Suite, including Word, Excel, PowerPoint, image-editing tools and a media player for playing content. And all these are packed within a portable form factor. In fact, the form factor has remained an attractive point and gained traction since the launch of the first Surface Tab in 2013. The company has recently announced its next iteration, the 12.3-inch Surface Pro 6, which is powered by Intel Core i5 or i7 processor and comes with 8 or 16 GB of RAM, up to 1 TB of SSD and 13.5 hours of battery backup. It is yet to be launched in India, but going by the specifications, you will get a powerful computing tablet with the price starting at $899 in overseas markets.

According to a report by ResearchAndMarkets.com, global tablet shipments are predicted to decline until 2019, when a combination of trends and opportunities will cause a turnaround until 2023. Tablet devices are expected to cannibalise laptops/ultrabooks with more advanced capabilities, form factors and a variety of price points. The market is expected to reach 187 million unit shipments globally with a positive CAGR of 1.6 per cent between 2017 and 2024 out of which Apple, Samsung and Amazon will ship around 61 per cent units.

Microsoft might have paved the way for power tabs, but there are significant others outside the Windows ecosystem. Back in 2015, Apple released the iPad Pro, aiming it to be a laptop replacement. The Cupertino giant designed a keyboard to go along and an Apple Pencil was specially designed with creativity in mind. But at the time, the device fell far short of expectations.

A lot had to be done on the OS front, which the company managed to achieve in the iOS 11 version, bringing in features such as drag-and-drop, dock, split-view screen, multitasking and more. The 2018 version of the iPad Pro has genuinely evolved as Apple has finally got rid of the home button and come up with an all-screen design similar to the Windows tablet. Available in 11 and 12.9 inch, there is a new A12X Bionic chip with four performance cores and four efficiency cores under the hood, which means the mean machine can carry out most demanding computing tasks such as photo editing or 3D modelling faster. 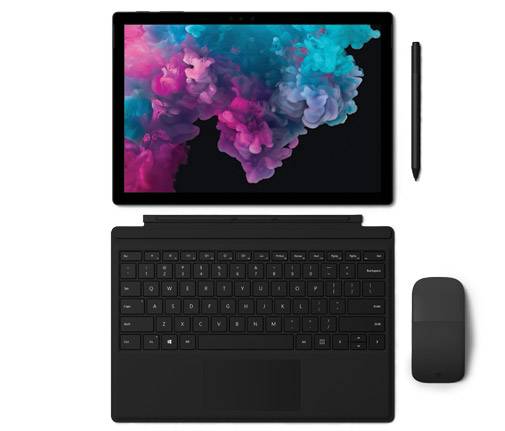 Earlier, the biggest issue with the iPad was its proprietary Lightning connection. But now it has been replaced by a Type-C port, which can be used by Google tabs as well. One can also use it to directly connect the new iPad to other devices, including DSLR cameras, 5K displays and computers. You can also charge your iPhone from the iPad's battery. For handling documentation, Apple has its own set of apps - Pages, Numbers and Keynote - which can be downloaded for free. The Microsoft Office Suite, which works just fine on the iOS platform, can be downloaded from the App Store.

Detachable keyboards are also gaining traction, but users have to fork out a lot of extra cash, and that hinders the widespread use of tablets as computing devices. For instance, a Surface Pro Type Cover (keyboard) starts at $129.99 while the stylus costs $99.99. Similarly, the Apple iPad Pro 2018 costs Rs 71,900 for the 11-inch version and Rs 89,900 for the bigger one, but the price tags do not include keyboards that cost Rs 15,900 and Rs 17,900, respectively. However, one can opt for affordable third-party keyboards.

High-end tabs may not be mass-market products but continue to have a niche market, which induced both Google and Samsung to enter this space. Last year, Google worked on making the Chrome OS more versatile for computing needs by adding Google Assistant and apps from the Google Play Store. It was a decisive step to bring productivity and performance to Pixelbook, and now the Pixel Slate, a 2-in-1 productivity tab, has the same advantage. The flagship tab starting at $599 features a 12.3-inch display and 3,000x2,000 pixel dimensions, is powered by 8th Gen Intel Celeron or Core i3, i5 or i7 processor, and comes with two USB-C ports with keyboard support and up to 10 hours of battery.

Samsung has added a work hat to Tab S4, priced at Rs 57,900. The 10.5-inch tablet with an S Pen and running Android Oreo supports Samsung DeX that combines the productivity of a PC with the mobility of a tablet. Galaxy Tab S4 works like a PC with a taskbar, multiwindow capability and familiar gestures such as drag and drop. "Paired with Samsung DeX and S Pen, Galaxy Tab S4 is designed for those who need something portable like a tablet yet capable like a PC," says Aditya Babbar, General Manager, Mobile Business, at Samsung India. "With the launch of the Galaxy Tab S4, we want to offer our consumers the ultimate combination of great productivity and immersive entertainment for their super tasking needs."