Fully automated farms may not be functional yet, but robots are ploughing, sowing, reaping and, most importantly, picking fruits and veggies
K.T.P. Radhika | Print Edition: June 30, 2019 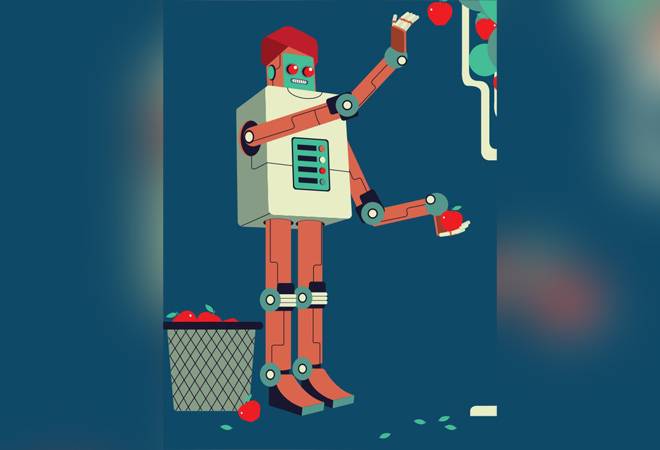 Sci-fi legend Isaac Asimov used the word robotics for the first time in his 1942 short story Runaround. Ever since, Asimov and many of his ilk have imagined agricultural worlds where superintelligent machines carry out farm production.

Make no mistake - machines used in agriculture are an old story. Mechanisation and automation have been here for decades in areas such as seeding and harvesting of crops in the US and elsewhere. But there are certain areas like picking delicate fruits and vegetables which still require human intervention. After all, harvesting strawberries and raspberries is not easy as one has to make sure that the berries plucked are ripe enough, have their skins intact and are packed neatly before reaching the market. The same goes for tomatoes. Machines are challenged in these cases as each fruit has to be located, assessed for ripeness (not all of them ripen at the same time), picked and packed with enormous care to avoid bruising.

Things have changed radically as recent developments in visual-sensing technologies, AI and machine learning, Big Data, GPS, drones, et all, are making it possible to replace humans when it comes to delicate harvesting. A few companies in India and abroad have already developed hi-tech robots adept at this task.

One of them is Florida-based strawberry farmer Gary Wishnatzki, whose start-up Harvest CROO has developed robots which can actually do this repetitive work better than humans and specialise in selective harvesting, according to New Yorker. The bots in question use multiple robotic components to perform different tasks such as leaf gathering, visual inspection, picking and packing. Berry 5.1, a fully automated strawberry picker, is the latest in this line and its makers hope an alpha prototype will be ready for commercial use by the end of this year. This fruit plucker can match the pace of 30 workers and has 16 spinning robotic arms which gather fruits using cameras, pincers and stereovision imaging, which means it captures hundreds of photographs of each plant to locate and identify 'harvestable' fruit. Its multiple robotic components help the machine run faster and operate at the scale needed to support current farm operations.

Berry 5.1 is not a lone example. Spanish company Agrobot has also developed a robot for strawberry picking that will be commercially available in California next year. There is another at Japan's Utsunomiya University; UK-based Dogtooth Technologies has created a robotic arm; Octinion in Belgium has built a fully autonomous strawberry picker, and the US-based start-up Root AI has developed a tomato-plucking robot called Virgo. Closer home, Bengaluru-based Green Robot Machinery has developed GRoboMac for cotton picking and gathering horticulture harvests. Also, researchers across the globe are developing and testing prototypes of orange, grape and apple harvesters as well as weeding and pruning machines. Harvest CROO claims that a couple of U.S. strawberry farms have invested in the company. If it can work at scale (along with its many competitors), we could soon be eating a plateful of pristine strawberries never exposed to human touch. The humble microphone looked much the same over decades and got scant attention from tech wizards. However, someone was needed to solve the problem of the ushers at live events - you always find them running around and handing over the mics to people during audience interaction. But the helter-skelter dash might be over soon as an app called Crowd Mics turns iOS/Android devices (both smartphones and tablets) into wireless microphones for seamless participation.

So, how does it work? One has to create a dedicated Wi-Fi network so that all attendees, speakers/presenters and moderators (if any) can join the system via the app downloaded on their smartphones or tablets. If audience members want to say something, they can send requests via the app and will be notified by the person in charge when it is their turn to speak. They will be directly connected to the venue's audio system via USB or balanced audio outputs (a small piece of hardware supports this feat).

The person managing audience interactions has full access to the participation log and the questions asked. Consequently, she can decide the order of the speakers, remove one from the request list, mute a person if required, create and publish a poll in real time and push, disable or delete text comments from the audience.

Design Is The Big Challenge