The future of training and development could lie in VR experiences that one can't replicate in real life.
Team BT | Print Edition: January 14, 2018 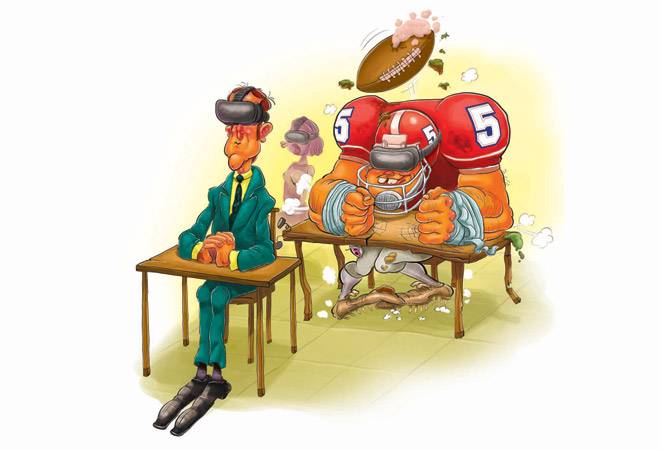 Flight simulators of one kind or another have existed for a long time. Incredibly, the first dates back to 1927, though like everything else its technology has advanced. Today, it's Virtual Reality (VR) that can help simulate situations that are not practical or even possible to do for real.

For most, VR just isn't going mainstream fast enough, but even if regular consumers can complain that there isn't enough content for it - at least if you're not a gamer - the industry hasn't given up on the tech yet. Uncomfortable and clunky as it may be, the VR 360-degree experience is so compelling that education and training is an obvious application.

Just recently, Walmart began training its employees for chaos on the shop floors in time for the holiday rush and Black Friday scenarios. A trainee would actually see on-coming customers, hear the din of hundreds around, and even converse with them, since it's now possible to interact on VR. With head-tracking and handheld controllers, it's also possible to watch the trainee's reactions and guide them.

The company responsible for enabling VR training by putting VR hardware and software into 200 Walmart Academy learning centres and facilities is Strivr. Derek Belch, CEO of Strivr Labs, says VR is not hype and that it is happening. Strivr went on to start training for United Rentals, the largest company in North America that provides equipment rentals for construction and industrial sites. "Because it's not feasible to send new hires to job sites around the world in a timely and cost-effective manner, the focus of United Rentals' efforts is using VR to enhance safety and sales training," said Belch, in a blog post. "In our first meeting, United Rentals told us they rarely can bring employees to construction sites to learn -  but with this, they can bring the construction site to them."

The fact that Walmart and United Rentals are using VR will have a lasting impact on the VR industry at large. What people predicted for a long time is actually happening. "Walmart's VR deployment may be the largest roll-out in the history of virtual reality. If VR is to ever succeed as a tech medium, Walmart may be where it all began, not Oculus," Belch says.

Robots are not all hard metal or, for that matter, impossibly pretty, doll-faced humanoids. For insomniacs, they can come in the form of cuddly pillow-like objects whose job is to make the owner get to sleep and stay asleep.

Somnox, the sleep robot, can breathe in a natural rhythm, rising and falling with each breath, and also play sounds to soothe the person. The field of soft robotics is an up and coming one, and a machine that isn't busy stealing someone's job or taking over the world may just have a welcome future living with humans. Somnox has all its machine internals hidden deep inside, leaving the exterior free to be cuddly. Someone who just can't get to sleep can use it much like a security blanket, holding on to it and hugging it at bedtime. What would be nice is if it could also be warm in the winter months and sing you to sleep - but that's still in the making.