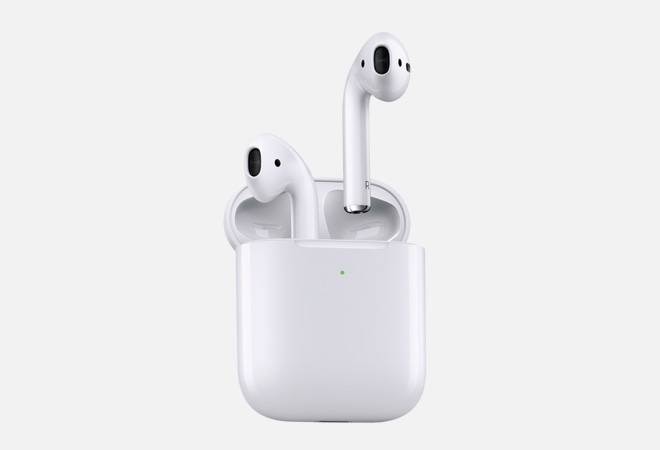 Apple's first-generation wireless AirPods initially drew flak because they might get lost anytime and one would have to buy a new pair for $160 instead of spending just $30 on a new pair of 'wired' EarPods.

Nevertheless, they turned out to be the most popular and most emulated wireless headphones due to their rock-solid performance and lightweight comfort. Similarly, the second-generation AirPods may fail to wow you at first as their colour, design, size or sound quality are the same as before; they will even slide into the previous case. But here comes the most significant change. Apple has introduced an optional wireless charging case that works with any Qi-compatible wireless charger.

It means you can use the same charging pad for your phone and the AirPods case. There is an LED indicator on the front that turns orange when charging is on. You can buy the new AirPods with a standard Lightning-only charging case for Rs  14,900 or juice it up further with a wireless charging case for Rs  18,900. In case you are a first-gen AirPods user and want to upgrade to wireless charging, buy the case separately for Rs  7,500. The case that houses and charges the AirPods can also be charged using the bundled lightning cable.

As is the case with all Apple products, pairing the AirPods with an iOS device was quite easy. Turn on your iPhone's Bluetooth and bring it near so that the phone can identify them and send a 'connect' prompt.

When connected to an Apple account, the AirPods will appear across all Apple devices which logged in using the same Apple ID. You can also use the new AirPods with Android phones. I found the AirPods comfortable and they did not fall off easily. However, these may not fit everyone.

The sound output continues to be loud and clear. Also, Apple has replaced the W1 chip of the previous model with an H1 chip that brings a host of new features, including hands-free Siri access, less latency, faster device switching and better battery back-up. Instead of double-tapping the AirPods to launch Siri, just say, Hey, Siri.

I was also able to choose what each AirPod could do with a double tap, be it activating Siri, playing/pausing or going to previous track or next track. While the charging case comes with enough juice to ensure 24 hours of music playback and 18 hours of talk time, AirPods can provide three hours of talk time and four hours of music playback on a single charge. Put them into the charging case for 15 minutes and they will be good to go for another couple of hours.

Goodies At A Premium Price