When Rida Javed, a student from Chandigarh, downloaded the Vigo Video app after watching it being promoted on a popular TV series, she had no idea that it would turn out to be a money-churner. After some thought, she started making short comic videos on the platform and they went viral. She has 1.8 million followers on the Chinese app, earned Rs 6 lakh until now and plans to keep making the videos.

Of late, several Chinese apps such as Kwai, Vigo Video, Bigo Live and TikTok have started operating in India and they are going all out to attract young people from Tier-II cities and beyond. Most of them make sure that video creators earn some money on their platforms although it is unclear how these companies earn revenues in the first place. Users on these platforms can earn money for the time they spend there and also for liking or sharing the content. On Vigo Video, for instance, users get Flames for uploading videos, shares, likes and comments. These can be converted to hard cash if you transfer them to e-wallets such as Paytm and PayPal. Kwai offers a Koin for five-six video views, which is equal to $0.01 and transferable to e-wallets. Bigo Live, too, has a similar plan for its users.

YouTube also has a monetisation plan for its video creators - it shares ad revenues with them. As most of these Chinese platforms are not earning much in India, their user monetisation schemes are just a trigger to gain traction and populate their apps. In fact, several of these apps have been called out for featuring unregulated pornographic content or child pornography.

For Vigo, India is the fastest-growing market, but the app is not making money. "We have seen some remarkable growth in India. Short videos are now big and this is not happening in China alone. Most of our superstars are from smaller towns in India," says Tony Tang, Head of Vigo India. However, the company does not want to monetise the app right now, and Tang says their priority is to improve user experience.

Their push to build a large user base seems to have worked. According to SimilarWeb's ranking of top social media apps for Android in India, TikTok, Vigo Video and Helo came right after Facebook, Instagram and Facebook Lite (in that order). Interestingly, all three are owned by Chinese technology company ByteDance.

According to Pavel Naiya, Senior Analyst (Devices and Ecosystem) at research firm Counterpoint Technology Market Research, several of these platforms are seeing traction as the creator community is growing rapidly across the country, thanks to the Internet and smartphone penetration at a fast clip. "For creators, YouTube is the major platform. But to become a YouTuber and create content, you need to put in a lot of efforts," he adds. As these Chinese apps are easy to use and have better filters in place, users are increasingly tapping into them. Pinterest is rolling out a new tool that will enable users customise their make-up and beauty searches by using their skin tones. The tool is being tested since last year, and Pinterest will soon introduce Palettes to help users refine their searches. Interestingly, beauty is one of the most-searched categories on the platform. Netflix has synced with Instagram Stories so that users can directly share on the social networking site what they are watching on the OTT platform. You will need a Netflix account and both apps to use this feature and can personalise it further for the benefit of your followers on Instagram. The feature could also be useful for brands as they are now tapping instagram Stories for marketing. 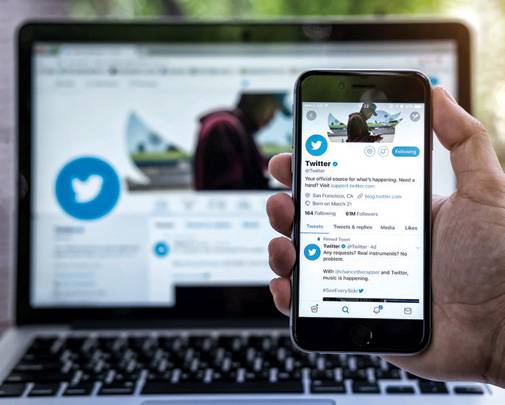 Twitter is testing a new tag that will help users trace the person who started a particular thread on the microblogging platform. In its current form, it adds a grey label called 'Original Tweeter' below the name of the person who started the trail. As of now, the feature is available to a small number of Android and iOS users across markets, but a full-fledged version may soon resolve issues like fake news and abuse by identifying people who are responsible.

165% growth in Android and iOS app downloads in India over the past two years, according to App Annie. Apps with maximum monthly active users in the country include WhatsApp, Facebook, SHAREit, Messenger, Truecaller, MX Player, UC Browser, Instagram, Amazon and Paytm, in that order.

Why RBI Gets It Wrong