Get Set For The Bot Era

"The day is not far when, with sheer computing power along with AI and robotics, we will be able to deal with unstructured tasks."
Errol D'Souza   New Delhi     Print Edition: January 13, 2019 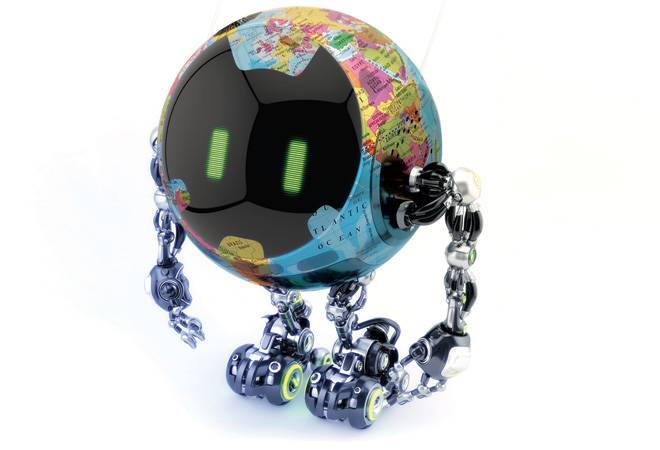 We live in a world that is increasingly susceptible to the spread of virtualisation or automation of business processes. This process has been steadily creeping up on us and we are increasingly accepting it without resistance. Not long ago we had to talk to an airline employee when we were flying. Now, if you do not have a check-in bag you can download your boarding pass on your phone or print it at a kiosk at the airport and arrive at the departure gate without interacting with an employee. Earlier, we went to bank tellers to withdraw cash from our accounts but with ATMs we no longer need to enter a bank. Fintech and the growth of mobile payments has been faster in our part of the world and the growth of ICT in India during the last decade at 16 per cent and at 14 per cent in China is far above the economic growth rates of these countries.

The rapid progress in digital technologies is affecting industries from retailing to banking to manufacturing and transportation. When Britain made the decision to leave the European Union it was computer-driven funds that made a killing in financial markets. The UK lost its top credit grade by S&P Global Ratings, which led to trillions being wiped from global equity values. But Lynx Asset Management and Quantitative Investment Management, which are computer driven funds that use models to decide which securities to buy and sell, posted gains the day after Brexit. In financial services, it was always expected that there is a requirement for an initial meeting with a customer to convince them to turn over their wealth to an investment advisor. Yet, now investment advisory firms such as Wealthfront do online advising and have no human advisor to secure money transfers for asset management, and such firms are profitable.

Virtualisation has been difficult to do in service industries because it is difficult for robots to handle things that are not completely rigid and do not vary from one object to the other. Slowly manufacturers are developing grippers that have dexterity and responsiveness. This coupled with advances in vision recognition allow robots to identify objects and enables a wide range of applications. Confectionery makers who used to engage humans to pack sweets into boxes now use robots as they do so without squashing the delicate confectionery. Moley Robotics has introduced an automated kitchen where multi-jointed robotic arms descend from the ceiling. The robot has cooked dishes that have been winners at Master Chef. Momentum Machines allows customers to customise their burgers and decide the mix of meats, condiments, sauces, and seasonings in their burger. McDonald's is increasingly installing digital self-service ordering and payment stations using touchscreen technology in restaurants abroad.

Higher labour costs are not the main factor fuelling this automation. Millennials have become used to apps and online services and do not feel the need to interact with other humans when ordering dinner, calling a cab, or stockpiling on household goods. Consumers have begun to value convenience and the ability to have their feedback matter. As customers rate Uber drivers, it has resulted in cleaner cars and better service. It is not just cheaper and more flexible machines that are designed to be more adaptive, but they are also being put to use in an increasing range of activities. In some countries drones are being used by insurance companies to assess damage to the roof of a house after a storm - an assessment that otherwise would have been difficult without climbing on the roof and exposing the insurance agent to danger. Drones are also being used to protect forests from illegal logging.

Cobots are working with humans and changing the surroundings. Tug is a robot that moves supplies around hospitals; Savioke handles deliveries to hotel rooms. Labour intensive tasks such as sewing garments and shoemaking have begun to change with Adidas opening a robot dominated factory in Germany. In architecture, computer generated designs are generating skyscrapers that are energy efficient, use technology that reduces the carbon footprint of the building, and sparingly use materials so as to save construction costs. There are programmes that compose music in different styles and music aficionados are unable to distinguish them from human compositions. Predictive coding is reading sample documents and classifying them as relevant or not for lawyers' arguments in a particular trial. Lawyers can then use the material to develop arguments and think through the strategy.

The past is not a pointer to the future as the strong growth in computing power, artificial intelligence and robotics have changed the way things are done in very dramatic ways. Paris-based Southpigalle, a conversational software agency, has created chatbots that are used to guide users into selecting luxury items like bejeweled pendants and rings. The chatbot inquires about tastes and offers a choice of jewellery to purchase. Botler - a fusion of chatbot and butler - is a new type of concierge that recommends places to visit in the Swiss ski resort St Moritz. Luxury brand Jaeger-LeCoultre launched a chatbot recently. Users put watch reference numbers to the bot, which then suggests suitable straps. The information about a customer's tastes combined with their social media profile and other demographic data allows brands to interact with customers and better understand their sentiments and adjust their product management strategies.

But the day is not far when with sheer computing power along with AI and robotics, we will be able to deal with unstructured tasks. That has been demonstrated by IBM's Watson coming up with predictions of enzymes that would turn on or off proteins such as p53 that curb the growth of cancers, after exposing the machine to 70,000 papers on the topic. Watson came up with seven candidate enzymes and they were found to be accurate. Our brave new world requires investments in revamping education to meet the demand for more flexible skill sets and lifelong learning and addressing the social challenges that will emerge due to it in future.

The writer is Director, Indian Institute of Management, Ahmedabad