Advertisers have not been able to break the ice on Quora and Reddit.
Devika Singh | Print Edition: December 31, 2017 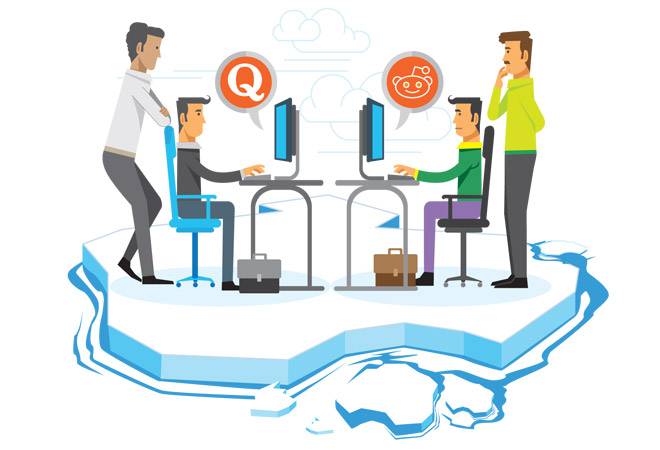 "What Indian brands are using Quora?", "Which foreign brand seems to be Indian?", "TIL (today I learnt) Lakme is an Indian brand of cosmetics which is named after French form of Lakshmi" - threads such as these appear on discussion platforms Reddit and Quora often. On both these websites, members express their opinions and disagreements vehemently on a range of topics. It's the perfect stage for brands looking to engage with an intelligent cohort. But their absence on these discussion forums is telling.

Of the two, Quora is more popular in India - in fact, after the US, it has the largest number of users in India. Quora, globally, has more than 200 million monthly unique visitors. Although Reddit has a larger user base around the world, in India its user base is small. According to Statista.com, globally, from April to September 2017, almost 1.58 billion users accessed the site. However, India is not even among its top five countries. Neither of these sites has a user base as large as Facebook's or Twitter's, but they have a loyal following in the country.

So why haven't brands been able to make inroads on these platforms? Earlier this year, Quora opened up its platform for advertising in India; Reddit, too, has been pushing brands to advertise on its platform. But not many have been willing.

"Because these are serious platforms, people expect knowledge from you; people expect a certain quality of replies. So it becomes imperative for you to create value there," says Nimesh Shah, Co-founder and Director, Windchimes Communications.

Reddit's AMA (Ask Me Anything) sessions that let users interact with celebrities from all walks of life - actors, authors, sportsmen, CEOs - are popular worldwide. But, more often than not, the sessions turn unpleasant. Not many marketers want to participate in AMA sessions, especially because users on the site are averse to promotions, and don't hesitate asking tough questions.

Deepinder Goyal, Founder and CEO of Zomato, participated in an AMA session to announce the launch of the company's home delivery service. Goyal regaled users with witty replies until one user, apparently an employee of Zomato, questioned the "toxic" culture in the company's tech team - this became the most upvoted question of the session. Goyal's reply triggered a backlash and the session ended on a sour note.

Not surprising then that only a few tech and lifestyle brands leverage AMA sessions; beyond that it is not a very rewarding proposition for marketers.

These sites have, however, emerged as great platforms for advertisers to gain insights on consumer behaviour. "Quora is very critical from the online reputation and crisis management perspective. Brands want to respond to any queries or concerns that come up there," says Rajiv Dingra, Founder and CEO, WATConsult.