"As developed nations start using Autonomous Flying Vehicles to offer a multitude of services, Indian drone service providers face a multitude of problems. There are many regulatory challenges as use of large parts of India's airspace is restricted."
Mark D Martin | Print Edition: January 13, 2019 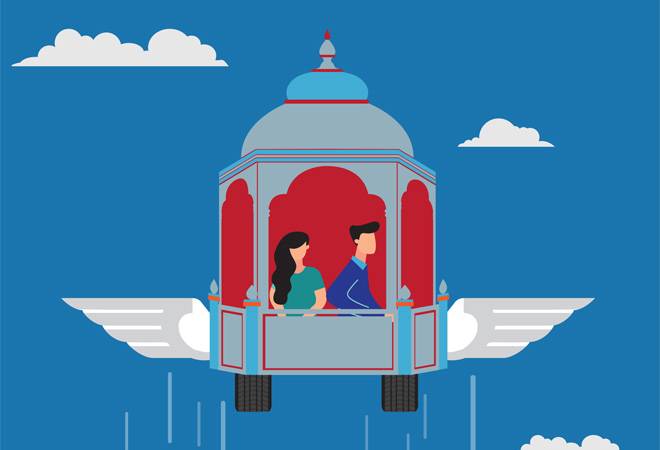 Look up in the sky! Is it a bird? Is it a plane?" No it's 'Lokeshan' and he has just reached your 'location'. And before you begin the chatter with 'Lokeshan' who wants cash only, let's see if this would be something that we'd see soon in India. The biggest challenge around making autonomous flight vehicles (AFV), drones (both manned and unmanned short-distance HeliTaxi Services) in India starts with airspace access, suitable landing spots and clearance for low altitude air corridor and defining the right regulatory environment.

India's airspace is one of the most stringently controlled, inaccessible and reserved airspaces in the world. With nearly 40 per cent of airspace, including that over cities being sealed off on account of VVIP areas, military installations, restricted access owing to flight path and in some cases zero access to even entering such an airspace from 0 to 1,000 feet banned, for a drone or AFV to even look at getting airborne makes it absolutely impossible.

Can this be fixed? Yes, by concerted action between the Ministry of Home Affairs, the Ministry of Defence and the Ministry of Civil Aviation, and it's not rocket science. This will need stakeholder buy in, though, discussions with security agencies and in some cases, realigning of what's defined as "ultra sensitive" areas and what can be defined as "restricted" such as the PMO, diplomatic enclaves, military enclaves and government installations. The irrationality and rigidity of such restrictions stems from a ridiculous amount of naivety and stupidity with concerns around photography and aerial surveillance, when very easily, absolutely anybody can get on to Google Earth Pro and scan, click and zoom away to one's heart's content. World over, ground level up to 1,500 feet is usually cleared for helicopter movement and other aircraft access provided you express caution and avoid entering any airspace that's occupied for operation of large aircraft. Usually when ground rules are set, they work extremely well. Those of you who grew up in Delhi or Mumbai around the 1980s would know this; gliders, light trainers and microlight aircraft flew around Safdarjung and Juhu airports with absolute freedom whilst larger Airbus and Boeing made landings in main airports safely and efficiently.

In the US, Europe, Australia, Africa and even in Pakistan and Bangladesh, helicopters landing on the top of buildings, hospitals, helipads on highways, police stations, fire stations and schoolyards is a common sight. And that's because there's an understanding that helicopters and vertical take-off landing ["VTOL"] aircraft are an essential part of any cosmopolitan city's ecosystem. We're in 2018 and whilst we claim to be the most formidable state, I'd like to dare anyone who can give me a count of how many "public-use" rooftop and surface helipads are there in Delhi, Mumbai and the suburbs.

Whilst there may be plans for them, the reason they aren't in use is because regulations surround their clearance and acceptance has been made so pedantically hard that even if one had the best helicopter in the world, it would still be impossible for one to fulfill the Indian DGCA's regulations. What the DGCA strangely seems to forget is that those who fly and operate helicopters themselves know the meaning of safety and safe operation of aircraft and would do what's right. Instead of opening up the environment to allow for free movement of aircraft to later fine-tune regulations and additional safety options as one would move on, the DGCA toes the line of "overcontrol and restriction". Unless India resolves this archaic and medieval oversight of landing spots for helicopters and later, possibly for drones and autonomous vehicles, we're not getting anywhere. Thank heavens the DGCA didn't exist during the days of Ramayana and the Mahabharata, because they'd probably have set fire to the Vimmanna, the Pushpak, the Udaan Khatola; and grounded Garuda and Lord Hanuman for being "unsafe in the air".

For AFV, manned and unmanned air vehicles and HeliTaxi's to work, one needs to have dedicated airspace corridors and routes that direct flying craft to get to where they need to go, in some sense a low-altitude highway in the sky that functions efficiently, and need minimal air traffic control supervision. One big question that has arisen is how would the ATC know and direct which aircraft or flying craft are carrying humans to safety in an emergency. For this we don't need to look too far. Dubai already has created corridors up to 200 feet over a 10 kilometre stretch that allows free and easy movement of drones and UAVs. India can follow suit, and we have areas that are intrinsically clear of obstructions that may allow this. Worli to Marine Drive over the sea, Colaba to Thane along the Eastern Harbor Coast; and in Delhi, DLF Cyber Hub to Phase 5; or Noida Film City to Greater Noida can be areas for suitable testing.

Anything and everything that flies anywhere in the world is governed by a regulator that understands the socio-economic benefit of such mediums and values the larger contribution it has with society, humanity and with bringing in efficiency. Not in India. Today it takes four months for a pilot to get a licence, an aircraft or helicopter nearly six months to get registered, an aviation company about a year to get its formal operating permit; and about six days for foreign aircraft to get a landing permit in India. In India, it's both exasperating, draining and a herculean task to get a simple approval for something as basic as a maintenance plan, or a post holder change. Now let's talk drones, UAV/MAV and autonomous flight. For your future UBER Drone Pilot 'Lokeshan' to touch his flying vehicle, he will need a licence, training, certification; and be asked to be in a simulator every year to check his handling abilities. Further, he would also need to be medically fit to fly and would need a check-up every year.

In the case of autonomous flying vehicles, before the service is put into motion, it would need to be tested, checked and be proven safe to carry humans on board; and for most parts of some flight legs, a pilot may be needed to act as a silent observer to only step in should something go wrong during flight. The landing area, its corresponding approach path and navigation data will also need to be certified, approved and made suitable for operations. The absolute earliest I expect for something as innovate as this to work in India gauging that no action with helicopter infrastructure or landing pads being created over the last five years, should be 10 years from now. Which either risks the Drone/UAV model becoming passe, or India once again playing catch up with future transport technology that might come up.

India loves to be aspirational and ambitious, qualities that have made India where it is today with information technology, pharmaceuticals, telecom, automotive manufacturing and general electronics; and there's a very good reason why aviation hasn't been brought to the masses to own, operate and fly as one's own.

There's a lot more that India needs to do with making our aviation environment "sky-friendly" and a lot of that would need fixing and resolution. Something we haven't seen the government do off late, except to create propaganda around policies which it believes would wake up, manifest itself as a poltergeist and set itself into motion, mysteriously.

Circa 2018 Lokeshan your soon to be UBER Drone Pilot is unemployed after completing his 250 hours of commercial flying training and waits outside the DGCA to be called in to get his commercial pilot licence given to him. And it's been four months already.

India does, indeed, have a long way to do. And judging by our current state, Lokeshan should take another 10 years to get to your "location". Be sure to have cash handy!