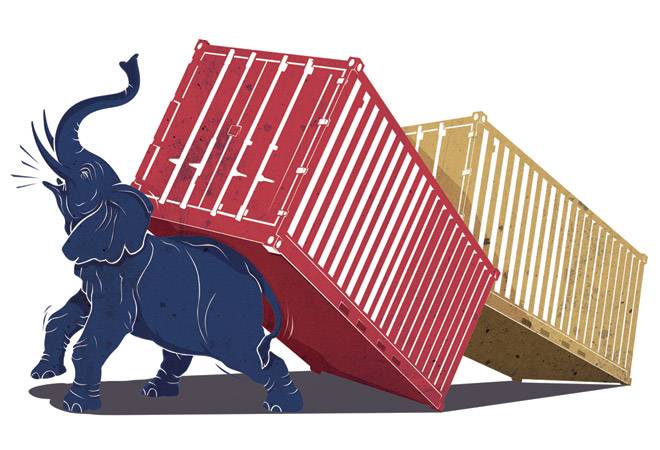 Sunil Harjai, a Noida-based leather footwear exporter, is worried. His value-added tax refunds worth Rs1.75 crore have been pending with the tax department for five years. Increased competition in the global market and supply disruptions caused by Goods and Services Tax (GST) last year and demonetisation the year before have hit his business. The turnover of his company, Siddharth Exports, has fallen from Rs35 crore to Rs20 crore. He fears he may have to rationalise his 400-strong workforce soon. "It's getting worse. A lot of things happening around us are increasing the feeling of negativity among exporters. To make matters worse, other countries are growing and taking our business," says Harjai, who is also the convener of the footwear panel of the Council of Leather Exports in India.

Leather and leather-product exports are among the various labour-intensive sectors facing a slowdown. Monthly foreign trade numbers given by the commerce ministry show that apparel exports for April 2018 were 22.76 per cent lower than in the same month of the previous year. Apparel production declined for 11 straight months up to March. "Continued backlog in GST and release of rebate on state levies are affecting sentiment," says H.K.L. Magu, Chairman, Apparel Export Promotion Council.

Foreign trade data for May shows while exports rose 20 per cent to $28.26 billion, ready-made garments, gems and jewellery, carpets, handicrafts and many other sectors, dominated by micro, small and medium enterprises (MSMEs), showed negative growth. "These are still facing the problem of liquidity as lending agencies have norms and GST refunds have slowed down," says a third exporter, Ganesh Kumar Gupta, President, Federation of Indian Export Organisations (FIEO). 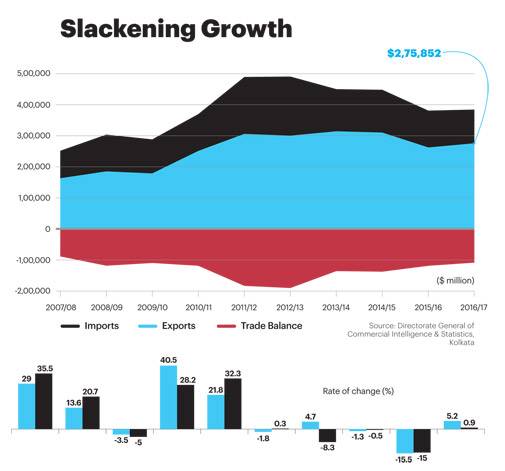 India's merchandise exports rose 9.8 per cent to $302.8 billion in 2017/18. While the government is eager to project this as an indication of recovering commodity exports, a study of the sectors that lag - mostly labour-intensive ones - shows the recovery, if any, is weak. The data make it clear that the government is far from achieving its target of $900 billion in goods and services exports by 2020. "A 20 per cent annual growth rate (that was needed to achieve the 2020 target when it was set in 2015) looks difficult, but much will depend on how commodity prices move," says Ajay Sahai, Director General, FIEO. Sahai hints at rise in crude oil prices which will increase the import bill, pushing up the dollar value of refined petroleum product exports. Refined petroleum is one of the largest component of India's export basket. "If food prices move up, along with prices of steel and other commodities, exports might rise in value terms, but the crucial issue is whether we are increasing our volumes, too. If not, we are adding to the unemployment in the country," says Sahai.

FIEO's Gupta predicts 15-20 per cent export growth in 2018/19. The drivers will be northward movement in petroleum and commodity prices and depreciation of the Indian rupee.

The story of India's merchandise exports - which grew at 20 per cent-plus a year for nearly a decade and peaked at $314.4 billion in 2013/14, before another negative growth trend set in - is intrinsically linked with oil prices. "During boom time, if you look at the commodity composition, you will see that petroleum exports rose. The growth wasn't led by manufacturing goods. All these oil companies, with huge refining capacities, got into international markets in a big way. Gems and jewellery was the other contributor. If you look at core manufacturing exports, there was never a major momentum. It wasn't as if we acquired the ability to compete with the big guys. So in absolute terms, it was not great, though in relative terms petroleum exports made the difference," says Biswajit Dhar, professor, Centre for Economic Studies and Planning, School of Social Sciences, JNU. Dhar says export growth fell due to decline in oil prices. "Export growth slowed because of low global oil prices. The value of exports came down and targets went haywire," he says.

But this time, rising oil prices might not be enough to make exports boom. The biggest reason is global uncertainty due to protectionist measures by trade majors like the US. "Even when the global economy was on the upturn, we were unable to increase exports. Now, if the global economy goes into a tailspin, it will become further difficult," says Dhar.

The government may not agree but Make-in-India has not made much difference to plans to make India a manufacturing power house. "Indian exports were not led by broadening or deepening of manufacturing or agriculture. There is no evidence that we are doing anything very different to turn the situation around even now. We talk about agriculture. But we expect the revival to happen primarily through foreign direct investment (FDI). Where in the world has this happened - you just sit back, do nothing, and FDI comes and does it? Additionally, because of GST-related issues, MSMEs are struggling. Funds are not being made available. We are trying to box ourselves into a hopeless stage," says Dhar.

FIEO's Gupta says solving domestic issues, including access to credit, cost of credit, especially for MSMEs, and payment of pending GST refunds can ensure some relief. He says India should identify the champion sectors and give them fiscal and non-fiscal support to sell in both advanced and emerging economies. "A product market-mix strategy will increase exports exponentially. The government should pro-actively engage with our trading partners, particularly the US, to safeguard the country's trade interests," he says.

Exporters are also being hit by an increasingly cautious banking system. "It has affected flow of credit. Withdrawal of letter of offer and letter of comfort has added to the cost of exporters by 1-3 per cent. Sectors which are not doing well and require the most support are the worst-hit due to the rigid approach of banks," says FIEO.

Harjai makes the micro points clear. "Labour laws should be export-friendly. Contract jobs should be allowed. Rate of interest for working capital loans should fall from current 12 per cent to 3-4 per cent. Logistics costs should be protected from petroleum price hike. Once these three or four measures are implemented, we will become competitive at one-go," he says. Harjai says exports should be taxed at zero rate and funds should not get stuck at the GST level. "I can give it in writing that once you give these things to me for one year, everything will be OK."

The pace and effectiveness of government actions can be debatable, but it has made attempts to minimise exporters' woes. On May 29 this year, FIEO organised a press conference to highlight delays in GST and IGST refunds. It said refunds of over Rs20,000 crore were pending on account of IGST and input tax credit (ITC) and many exporters have not been able to file for refund due to technical glitches as ITC and export happened in different months. One of the FIEO's major demands was a look into the refund problem, a drive to liquidate pending cases and putting the refund process on track.

Within hours, the government announced a Special Refund Fortnight drive from May 31 to June 14, in which Central and state GST officers tried to clear all GST refund applications received on or before April 30. The finance ministry was also at pains to clarify that pending IGST and ITC refund claims were to the tune of Rs14,000 crore and not Rs20,000 crore as FIEO alleged.

The government is also actively engaging with the US to see that the threat of higher tariffs there does not harm exporters here. Commerce Minister Suresh Prabhu has just returned after a two-day visit to the US, where he held marathon meetings with key US trade officials, including US Trade Representative Robert E. Lighthizer, Secretary of Commerce Wilbur L. Ross and Secretary of Agriculture Sonny Perdue to take forward bilateral commercial ties. "The US has shown readiness to engage with us to resolve all outstanding bilateral trade issues," Prabhu said, adding that an official-level meeting of the two countries will meet soon to take this forward.

Given the confrontational approach, the US is adopting towards its key trade partners like Canada, China and the European Union, even an assurance for a comprehensive dialogue on all contentious issues is being considered as a reassuring gesture by government officials.

Prabhu was also bullish about the prospects of Indian exports. The ministry has tasked the director general of foreign trade to work on export promotion measures that are compliant with the World Trade Organization's stipulations.

"India needs to enhance its cost competitiveness both on scale and pricing. It also requires a deeper understanding of regulatory frameworks of its strategic and export partners to chart a faster growth path," says Commerce Secretary Rita Teaotia.

At a macro level, government's apex think-tank, Niti Aayog, is working on solutions to problems hindering export growth. "The world demand is quite good. Global economy is growing, global trade is growing. So, we have to get our act together and we are looking at what can be done. We will come up with some recommendations very soon, within weeks," says Rajiv Kumar, Vice Chairman, Niti Aayog. He says the attempt is to identify measures the government needs to take to push exports. "The fact is that we have to do this and it is required. The growth in exports must go back to what it was in the 2003/04," he says.

With politics dominating in the last year of the government's tenure, negotiations for new free-trade agreements are unlikely to gather momentum. Nor will the government dare to take any visibly pro-industry measures which may turn as anti-worker or anti-farmer. Business-as-usual growth, aided by oil price-linked value growth, will continue. Non-petroleum and non-gems and jewellery sectors that contributed to growth also offer hope.

The Indian rupee has been the worst-performing currency in Asia of late and, therefore, Indian exporters have gained over their competitors in Asia. However, many exporters who have hedged their risk or taken pre-shipment credit in foreign currency have not benefitted. "The sectors with high import intensity like gems and jewellery, petroleum, electronics hardware, etc., have marginally benefitted as they have taken a hit on their imports. However, the depreciation has helped handicrafts, carpets, marine products, agro-processed products, sports goods, apparels and textiles, and leather, which primarily depend on domestic inputs," says FIEO.

"Following the contraction in March 2018, exports reverted to year on year expansion in April 2018, led by high growth in engineering goods, chemicals, drugs and pharmaceuticals and electronic goods, which offset the decline in segments such as textiles, gems and jewelry and iron ore," says Aditi Nayar, Principal Economist, ICRA. Nayar also notes that with 18.7 per cent growth in services exports, the services surplus rose to $6.6 billion in March 2018, despite the 24.3 per cent expansion in services imports.

Assuming an average price for the Indian crude oil basket of $70 a barrel, ICRA forecasts that net petroleum, crude and products import bill will surge to $93 billion in 2018/19 from $70 billion in 2017/18. It also expects the current account deficit to be $65-70 billion, or 2.5 per cent of GDP, in 2018/19. While the numbers, as the agency suggests, may not be alarming, macroeconomic conditions suggest challenging times for Indian exports.

That perhaps could be the reason why FIEO's Saha says: "Even if India's merchandise exports grow 10-12 per cent by volume, one should be pretty satisfied."

"We have to regain the credibility the industry lost"