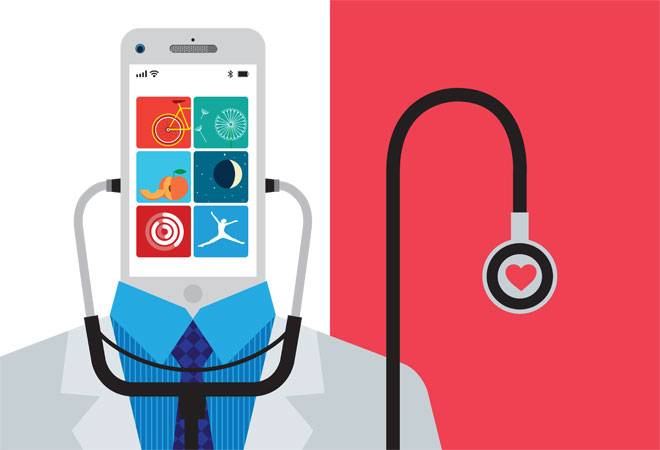 Sunil Kumar, (name changed), a middle-aged IT professional from suburban Mumbai, found that he had high levels of blood sugar and symptoms of Type II diabetes after a routine blood test. The diabetologist prescribed a few medicines. But the last one jotted down after obtaining Kumar's consent, took him by surprise. It was a mobile app called Wellthy Care.

The next day he got a call from Wellthy Therapeutics and soon, a kit with a blood glucose monitoring equipment and an 'activation card' was home-delivered. Since then, Wellthy is monitoring Kumar's movements via his smartphone. If he orders a pizza from his mobile app or books a weekend movie ticket using his smartphone, he starts getting alerts on last week's sugar levels and tips via chat on advisable food for the day and the week ahead. At times, the alert goes to his wife, Suma, advising her to include more salads and vegetables in Kumar's lunchbox.

That is not all. If Kumar's smartphone does not record any movement for hours, Carey, the personal health coach on the app, says, "Why don't you talk to your client while walking to and fro to burn a few calories?" Despite being under constant surveillance, Kumar is happy. So are his family and his doctor. His food habits and health are going the way they want, and his sugar levels are under control.

Welcome to an all-new world of personalised, digital healthcare as Mumbai-based Wellthy Therapeutics claims to be India's (and possibly South Asia's) first and only 'prescription digital therapeutics' company.

What Is Digital Therapeutics

Digital therapeutics, the new-age world of digital medicines, is powered by artificial intelligence (AI). Unlike the downloadable healthcare apps (an estimated 3,18,000 are out there) that provide tips to improve your health, these medical apps have been studied in clinical trials just like any other medicine, are cleared by drug regulatory agencies and require a doctor's prescription to be used for improving medical outcomes. They provide the efficacy of a drug at a fraction of the treatment cost. These apps help modify patient behaviour, intervene in routine exercise and eating habits, and remotely monitor them so that long-term health results can be improved through a prescribed diet and fitness plan, ultimately reducing drug intake. In brief, they help control the severity of lifestyle diseases such as diabetes, heart conditions, smoking and drinking habits, high blood pressure and pulmonary diseases like chronic obstructive pulmonary disease. Plus, doctors get access to data on patient behaviour so that they can decide on or change the course of treatment.

So far, more than a dozen prescription digital therapeutics companies have come up in the west, specialising in areas such as diabetes management, cocaine and substance abuse, and cardiovascular diseases. In September 2017, San Francisco-based Pear Therapeutics' reSET system, developed to treat substance abuse, got a De Novo Classification clearance from the US Food and Drug Administration (De Novo provides marketing clearance to novel, low-to-moderate-risk medical devices which are first of their kind). It is the first software-only digital therapeutic tool that claims to improve clinical outcomes in a disease. Propeller Health, which makes a sensor that monitors inhaler usage and provides feedback via a mobile app, has been chosen by GlaxoSmithKline to create a digital therapy platform for its asthma medication.

When Abhishek Shah, 34, wanted to start his business, he decided to go for some novel diabetes management solutions. There is a reason why Shah, with a BS in Chemical and Biomolecular Engineering from the Georgia Institute of Technology and an MBA from the Indian School of Business, decided to do it. His father Nikhil Shah, who owns Marvel Drugs, a bulk drug manufacturing company, and mother Bhowli Shah, who runs a medical consumables firm, have developed Type II diabetes early in life, which could have been prevented or controlled with a change in lifestyle.

Usually, doctors prescribe a few medicines from about seven 'families' of 25,000-plus drug brands available in the market for Type II diabetes management. They also advice planned or recreational physical activities for achieving 30 minutes of daily or 150 minutes of weekly exercise recommended by the American Association of Clinical Endocrinologists. Studies, however, reveal that fewer than 10 per cent Indians habitually engage in planned or recreational physical activity.

Shah studied digital therapeutics as a business proposition and decided to try his luck in that area. Coming from a family of entrepreneurs, getting into the business was easy. He helped his parents run the family businesses and later worked as an investment banker, handling the family office of serial entrepreneur Ronnie Screwvala. But the earlier focus was never lost. "We started with a team of doctors, researchers and engineers who were passionate about hacking diabetes. After a lot of brainstorming, we built our therapeutic solution on clinically proven AADE 7 guidelines and tweaked the same for the Asian population," recalls Shah.

In 2015, Wellthy Therapeutics started developing an AI-powered health coach chatbot called Carey, which can be connected via a smartphone app. A GPS-enabled gyrometer was also developed for tracking physical activity. A 16-week lifestyle modification programme was designed for the Wellthy Diabetes package, meant for people with Type II diabetes. The AI-powered chatbot was used to design communications and interventions in sync with world-standard diabetes management guidelines. Coaching and feedback came based on self-reported blood glucose level, weight, physical activity and meals.

"At the end of the 16-week programme, patients showed improvements in blood sugar control, measured as a drop in mean haemoglobin A1c or HbA1C levels (1.04 per cent). They also saw a mean weight loss of 3.4 kg and saved up to `15,000 in diabetes-related expenses per year," says Shah.

"Next we got on board a team of doctors, clinical trial specialists and insurers. So far, we have conducted clinical trials involving more than 5,000 Type II diabetic patients and the results are exciting with a success rate of over 65 per cent," he informs.

Clinical trials revealed that on an average, the level of HbA1c, a form of haemoglobin to which glucose is bound and which is responsible for diabetes, was reduced by over 0.61 per cent after the treatment regime while 61.5 per cent of the participants showed a significant drop in their HbA1c levels with an average of -1.17 per cent reduction. The normal level of HbA1c is less than 6 per cent.

Wellthy published the findings in medical journals and doctors' congregations. This data was presented at the 11th International Conference on Advanced Technologies and Treatments for Diabetes (ATTD 2018) and earlier at the AACE 26th Annual Congress, 77th Scientific Sessions of American Diabetes Association, the IDF Congress 2017, the 11th ATTD International Conference, and the 44th and 45th annual conferences of Research Society for the Study of Diabetes in India.

Wellthy Therapeutics employs around 60 people, and the majority works for research and technical development. In March this year, the company raised a seed funding of $2.1 million from a clutch of investors, including Manipal Education and Medical Group CEO and Managing Director Dr Ranjan Pai's family office, Singapore-based Beenext Ventures, GrowX Ventures, Currae Healthtech Fund, IIFL Select Equity Fund and other strategic HNI investors such as Ashutosh Taparia and Karan Bhagat.

According to Pai, chronic diseases have become the biggest burden on healthcare. Wellthy's product suite has the potential to be the glue that binds healthcare providers, insurers, pharma companies and diagnostics so that they are one step closer to better patient outcomes. "We were impressed with the early data of Wellthy's Type II diabetes digital therapeutics, and can see the opportunity for their solution suite to elevate the standard of care for multiple therapy areas," he said while announcing the investment.

Ashish Taneja, MD of GrowX Ventures, says his firm was impressed by the ecosystem and the novel capabilities of the diabetes management solution built by Wellthy even before the company attracted seed investment. "In the first couple of years, we will be getting on board insurers, doctors and pharma companies to experiment and evolve a right model for growth. Wellthy is already developing tools to expand into other chronic therapy areas," he says.

As of now, the company is planning to launch the product commercially in India and a couple of South Asian countries by teaming up with a group of insurance companies and doctors. From a patient's point of view, the product will be priced on a par with regular medicines or even less, the founder says. "Our product falls under a category currently not covered in India. The Drug Controller General of India, the country's drug regulator, is yet to come up with a regulatory framework for digital therapeutics. We are working with the industry to expedite the same" explains Shah.

The market potential is huge. "The diabetes drug market in India currently stands at Rs 24,000 crore. Even if we manage to grab a small share of it, that will be a big opportunity," adds Shah. Initially, operations are restricted to Mumbai and Pune but will soon be extended to other cities. Going ahead, the target is to reverse or control the sugar levels of 10 million-plus people by 2025, he says. Wellthy is also planning to launch similar applications for cardiovascular disorders by April 2019 and then venture into metabolic disorders. The road ahead for digital therapeutics is a gold mine and Wellthy plans to tread that path with caution, says Shah.

All Set For The Big Game