Sectoral growth has not translated into growth in fees paid for professional and legal services. India Inc. witnessed the slowest growth in professional and legal fees in fiscal 2017/18, thanks to greater competition among professional firms.

Corporate India's professional and legal expenses continue to increase, but at a decelerated pace- growing at just 2 per cent in 2017/18, the slowest over five years. An analysis of 358 companies of the BSE 500 using Ace Equity database reveals curious details. In the five-year period, these costs more than doubled from Rs 11,198 crore in 2013/14 to Rs 23,625 crore in 2017/18. Professional and legal fees include expenses such as auditor's remuneration, licences fees, and fees to external consultants.

The increase in the overall activity level but a slower growth in such expenses cannot be really explained easily. Suresh Surana, Founder, RSM Astute Consulting Group, says, "In the past three years, there have been certain major changes resulting in higher professional fees such as Ind AS (financial year 2016/17 and 2017/18 for phase I and phase II), audit rotation, GST Transition (financial year 2017/18) and Insolvency and Bankruptcy Code (2017/18). But at the same time, there is intense pressure on fees. For example, audit rotation is believed to have resulted in a fee reduction of 10-20 per cent in several cases. These developments could reflect the overall growth in fees being only 2 per cent despite heightened activity for financial year 2017/18."

Interestingly, 2015/16 saw the sharpest growth of 71.3 per cent in the professional and legal fees by the companies. "Prior to elections, a lot of companies had stopped spending based on uncertainties over the government and their policies. A lot of things got released after the elections," says L. Badri Narayanan, Partner, Lakshmikumaran and Sridharan. M&A could have picked up, but these are one-time expenses and if they are the reason for increasing legal expenses in a particular year, the expenses should come down subsequently, which doesn't seem to be so, Narayanan highlights. Another reason, he says, could be the Companies Act, 2013, which began coming into effect from 2014 and 2015. This could have increased the compliance cost of the companies. 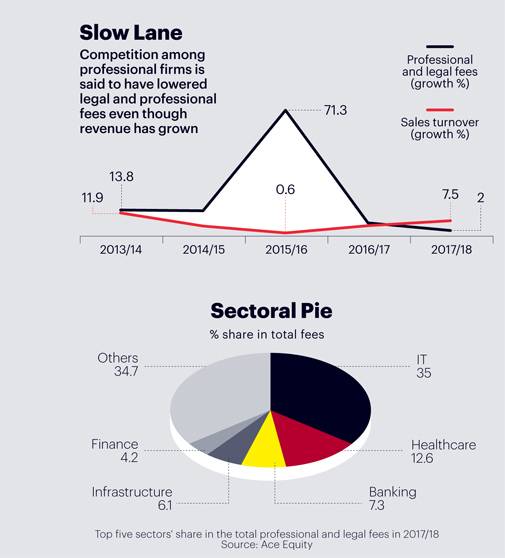 The top five spenders accounted for more than 40 per cent of the total legal spends in 2017/18 with Tata Consultancy Services (TCS) topping the charts, shelling out Rs 6,401 crore, followed by Larsen & Toubro spending Rs 1,028.8 crore.

This sample of companies saw 14.4 per cent growth in their total expenditure compared to 2 per cent growth in these expenses in 2017/18. A closer look shows that revenue growth has outpaced expenses growth for the first time in these five years. Moreover, legal spending took a slice of less than 1 per cent of the revenues. To be precise, these overhead costs as a per cent of total turnover was a tad lower at 0.7 per cent last year compared to 0.8 per cent the previous year. While the impact on the companies could be marginal, the corporate sector is sure to welcome any savings.

The sectoral share is dominated by IT companies and Indian pharma together accounting for around 48 per cent share in overall legal expenses in 2017/18. The growth in the IT sector's overall professional and legal fees was on a slower track - 1.9 per cent in 2017/18 compared to 9.5 per cent in 2016/17. The healthcare space, however, saw a growth of 5.8 per cent from a decline of around 13 per cent. "Both IT and healthcare sectors should see a healthy increase in the intake of professional services this year. In fact, the BFSI, Fintech and e-commerce sector which are also big users of professional services should see a very healthy increase," says Surana.

Most of the mega reforms have been implemented and seem to have stabilised. Businesses are expected to continue focus on improving operational efficiency. Increased use of automation and technology will optimise costs for businesses and service providers. However, "the audit fees will start rising again due to heightened risk perception and the establishment of National Financial Reporting Authority," says Surana.