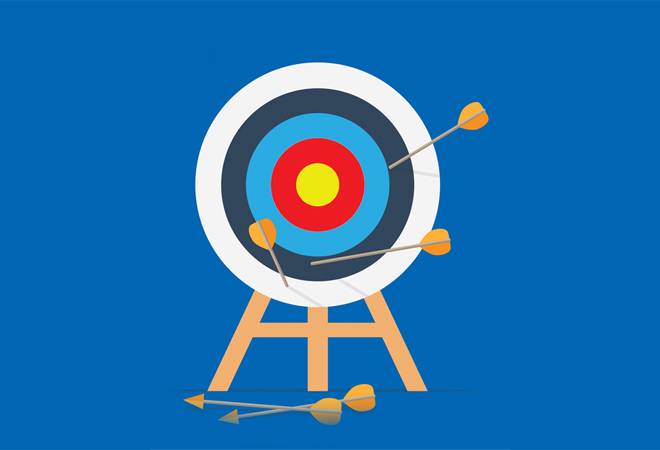 Amid the gloom and doom, the latest findings of the Business Today's Business Confidence Index (BCI) show that the slowdown seems to have bottomed out. The BCI for the July-September quarter rose on expectations of improvement in economic growth after the corporate tax cuts announced by Finance Minister Nirmala Sitharaman last month to boost investment, revive growth and create jobs. The BCI - on a scale of 100 - was at 49.1 compared with 48.5 in the previous quarter and 49.7 in the quarter before that. Market research agency C fore quizzed 500 CEOs and chief financial officers in 12 cities for the survey.

Bandhan Bank's Chief Economist and Head of Research Siddhartha Sanyal says sentiment is subdued at the moment and the way it had deteriorated over the June-September period was stark. "People are not expecting further worsening. It's not really an uptick. There's a general feeling that we have hit the bottom of the cycle, and from this point onwards, things can be somewhat better. The pace of recovery will be conservative though," he says. 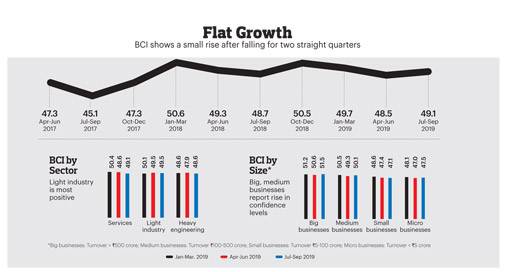 The survey shows that most respondents are not expecting the situation to change in the October-to-December period but they are less pessimistic for nearly all the survey parameters than a quarter ago. Respondents have positive outlook in areas like overall economic situation, availability of finance, order book, financial situation, working capital requirement, cost of external finance, production level, cost of raw material, sales pick-up, capacity utilisation, exports, hiring and profits. For instance, in the previous survey, 28 per cent respondents were expecting the overall economic situation to deteriorate in the October-to-December quarter. In the current survey, that number has gone down to 14 per cent. Similarly, 29 per cent respondents are expecting availability of finance to worsen in the current survey as compared to 50 per cent in the previous survey.

The survey points out that 46 per cent respondents believe that the recent corporate tax rate cuts will help arrest the fall in economic growth. As per the survey, 47 per cent corporate leaders do not expect uptick in private consumption in the current quarter. This is especially worrying since the government has announced a slew of measures to start growth.

D.K. Srivastava, Chief Policy Advisor at EY, says that the nature of policy changes are such they it will take some time for the economy to recover. "There will be some effect because of the festive season, but on a sustainable basis, we should be able to see signs of recovery after two quarters," he says.

So far, efforts to revive demand have been primarily led by monetary policy action. In October, the Reserve Bank of India (RBI) reduced the repo rate by 25 basis points to 5.15 per cent, the fifth consecutive cut. But the slowdown momentum is so big that monetary policy changes have not been able to uplift sentiment and spur demand. This is partly due to banks' reluctance to pass on the rate cuts to borrowers as they are facing a liquidity crisis and have to ensure that their deposits don't fall below a threshold.

It's clear that unless demand picks up, there will not be any economic recovery and, therefore, the time is ripe for a demand-oriented stimulus, which could include government stepping up its capital expenditure. "The direct method of stimulating the economy would be to spend on its own. They have gone by the route which takes time. The reason they did so is low buoyancy of taxes (direct and indirect) and fiscal deficit limits. However, the government has already shown that it is willing to go for fiscal deficit slippage," says EY's Srivastava.

Despite a series of measures announced by the government over the past few weeks, the survey shows that 57 per cent respondents still don't plan to make fresh investments. In the long term, the corporate rate cut is a positive move, say economists. It's also a fulfillment of the commitment made by this government that it will simplify the corporate tax regime. The question is if one can expect companies to jump into the new regime straight away. The answer is not clear yet. Why? The policy has some terms and conditions. Also, the companies have aligned their tax calculations in terms of the existing depreciation schedule that they have been following for a while.

"Even if corporates get some relief on tax payable, they will likely be in no hurry to put that saved money into investment. On the private consumption side, the broad consumer confidence is still depressed, and the drop in private consumption has been dramatic. Private final consumption dipped to 3.1 per cent year-on-year during the June quarter. Though it's difficult to believe that consumption growth will remain that bad for a long period of time," says Bandhan Bank's Sanyal.

"Investment decisions in response to corporate tax reforms will take two-three years. Foreign companies are maintaining status quo as they don't have any changes in their tax burden. Domestic companies will not respond until capacity utilisation is improved," says an economist.

The survey shows that respondents expect things to worsen in areas like selling price and imports. For instance, 15 per cent are hopeful of improvement in selling prices in the current quarter as compared 18 per cent in the previous survey.

As a supplement to the survey, we do an assessment of other economic indicators. These include export-import, index of industrial production (IIP) and consumer price inflation (CPI). On the macro side, the numbers gave mixed signals. While domestic production growth tanked to 5 per cent in the June quarter, the weakest in more than six years, IIP accelerated to 4.3 per cent, and the CPI stayed below 4 per cent for the 13th month in a row.

It's difficult to say that the steps so far will have an immediate impact on the recovery process. But it's becoming clear that the government still needs to cover a lot of ground.

"We Want Our Swagger Back"