Odisha has done well on GSDP growth. It is now looking to attract value-added players in the metals space and rev up its MSME sector.
Sonal Khetarpal | Print Edition: November 18, 2018 Over the last 15 years, Odisha has been single-mindedly focused on fast GSDP growth and becoming the country's top aluminum and stainless steel producer with the help of big investments. The efforts have paid off.

It is now a hub for primary metals with presence of big metal companies such as Tata Steel, Bhushan Steel and JSPL. It accounts for one-fifth of the country's steel production and almost half its aluminum production. Also, its GSDP growth has been surpassing the national rate for some years, mainly due to rich mineral reserves. The state, after all, accounts for 52.3 per cent of India's iron ore, 21.6 per cent of coal and 49.7 per cent of bauxite deposits.

Now, the state is on the cusp of change as it looks to move from being a supplier of raw materials to a maker of value-added products. For that, it has built a downstream park in Kalinganagar, an area which has steady supply of raw material. "The state government has given approval in principle to Jindal Stainless and Jindal Steel and Power. Vedanta and Hindalco have also sent proposals. We are following up with the Tatas," says Sanjeev Chopra, Principal Secretary (Industry), Odisha.

The state has identified six sectors for attracting investments under Vision 2025. These include downstream industries; food processing and sea food; plastics, chemicals and petrochemicals; ESDM (Electronic System Design and Manufacturing) and IT/ITeS; textiles and apparels; and tourism. To promote these sectors, it has developed sector-specific clusters such as a National Investment and Manufacturing Zone in Kalinganagar, an Aluminum Park in Angul, a Plastics Park in Paradip, and a Sea Food Park in Deras, among others. The aluminum park will leverage Orissa's bauxite reserves. The park will be the first such in the subcontinent with a facility to directly obtain molten aluminium from the smelter. The plastics park will get feedstock such as polypropylene and ethylene derivatives from an Indian Oil plant just 5 km away.

These parks will help Odisha kick-start an MSME boom. Traditionally, the state has been focused on large industries, which has led to growth but not created the desired number of jobs. The Reserve Bank of India data for 2015 pegs the state's unemployment rate at 3.8 per cent, slightly more than the national average of 3.7 per cent (2015/16), but more than that of several states. A World Bank report says jobs in Odisha grew just 0.7 per cent from 2005 to 2012. Half the state's population still depends on farming. According to the Ministry of Micro, Small & Medium Enterprises Annual Report 2017/18, the number of MSMEs in Odisha is 19.84 lakh compared to Uttar Pradesh's 89.99 lakh and West Bengal's 88.67 lakh. 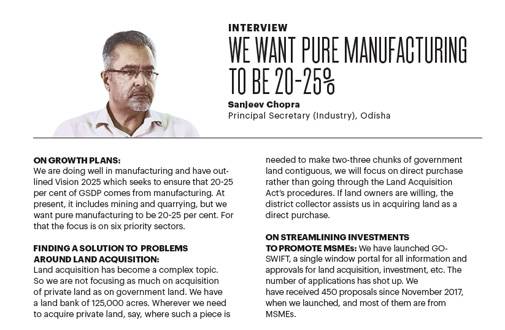 "The government has been trying to promote industrial parks for quite some time. Take the case of Aluminum Park that has been there for the last five years but has not attracted investors as there isn't much infrastructure around the area," says Dillip Satapathy, Business Standard Resident Editor in Bhubaneshwar.

According to the CMIE, new investments announced in Odisha increased a whopping 504 per cent from 2016 to 2017 at `2,06,939.49 crore. They again reduced sharply from 2017 to 2018 by 81 per cent to `48,891.6 crore. The state is also trying to urgently resolve the issue of displacement of people due to large industrial projects. To tackle this tricky issue, which has led to several controversies in the past, it plans to depend on its 1,25,000 acres land bank instead of acquiring land from private persons, except as a last resort. The New Delhi-based Centre for Science and Environment (CSE), in a report, People First: District Mineral Foundation Status Report, says even after three years of the Centre rolling out the District Mineral Foundation (to benefit mining-affected people), it has failed to identify both mining-affected people and mining-affected areas. The state, with its huge mineral deposits, needs to focus specifically in this area.