Party manifestos are promising the moon. Will the costs work out? 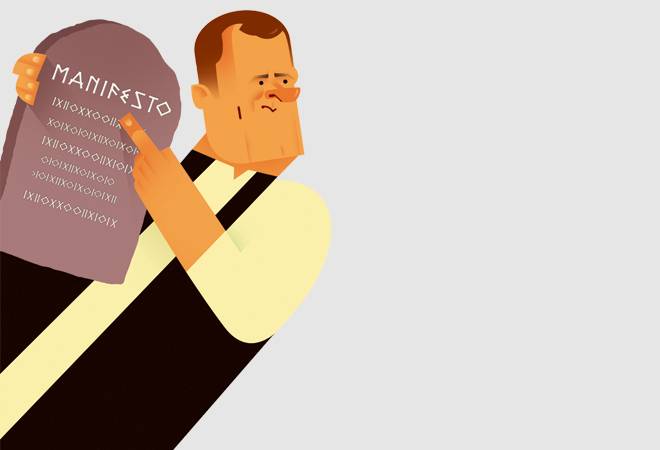 I am placing my signature below all that has been told by the leaders who spoke before me." This is how Prime Minister Narendra Modi started his speech at the Sankalp Patra release function organised by the Bharatiya Janata Party (BJP) at its headquarters in New Delhi on April 8. Modi was endorsing the broad contours of the BJP's vision statement unveiled by top party leaders Amit Shah, Rajnath Singh, Arun Jaitley and Sushma Swaraj before him.

"No need to repeat the same," he said. If repetition was strictly avoided, the Sankalp Patra would have looked much thinner, as several promises in the BJP's vision document are quite familiar to the Indian public. Doubling of farmers' income is one. Swachh Bharat is another.

India's main opposition party, the Indian National Congress (INC), is not far behind in visionary statements. The party's election manifesto, named Congress Will Deliver, sets the goal of eliminating abject poverty by 2030. It assures Rs 72,000 annual income to 20 per cent poorest 50 million families through a minimum income support programme called the Nyuntam Aay Yojana or NYAY.

Political parties are not known to keep all promises but their manifestos certainly give a hint of their likely policies if they are voted to power. But what if this time, for a change, they implement some of their major announcements? What will be the cost on the exchequer? While Congress' NYAY will cost Rs 3.6 lakh crore (Rs 72,000 X 50 million), the party's plan to double spending on education from 1.4 per cent of gross domestic product, or GDP, to 3 per cent could cost an additional Rs 3.4 lakh crore (based on 2019/20 estimated GDP).

It also plans to increase expenditure on education from nearly 3 per cent to 6 per cent of GDP. This means an additional spend of Rs 7 lakh crore. These three promises alone will cost the exchequer around Rs 14 lakh crore if rolled out in one year only. However, the Congress has said that the targeted increase in healthcare and education expenditure will be achieved by 2023/24. Even NYAY could be rolled out in phases. According to the manifesto, the scheme will have a design phase (three months), followed by a pilot and testing phase (six-nine months), before it is rolled out. This means rollout from 2020/21.

The BJP's biggest announcement is expansion of the Pradhan Mantri Kisan Samman Nidhi Yojana to all. At present, the scheme promises Rs 6,000 a year to each farmer with land holding of up to two hectares. According to Abhijit Sen, former member of the Planning Commission, if the scheme is expanded to landless farmers and those with land holdings of more than two hectares, it may cost the exchequer as much as the Congress' NYAY. The BJP hasn't made any other announcement involving a large additional expenditure. Major parties recognise the crisis in the farm sector and are trying to woo farmers. (Photograph by A Prabhakar Rao)

Odisha's Biju Janata Dal has made a sweeping statement that it will ensure health security, food security and education security for everybody in the state. The Telugu Desam Party of Andhra Pradesh has promised creation of 2.5 lakh jobs in the IT sector and three lakh in the electronics manufacturing sector in the state without elaborating how, or by when.

Election manifestos of Indian political parties are always a mix of aspirations and promises. That is why financial implications of such promises are not clear. But the trend is hard to miss. Irrespective of the specifics, the overall commitment in terms of additional allocations for social or infrastructure sectors remains more or less the same for all political parties. Sen says manifestos, across parties, are committing themselves to spending an extra 1-2 per cent of GDP on social sector projects. This is 5 per cent of GDP if infrastructure is added, but in infrastructure, the public exchequer is not the only contributor.

"As far as the Congress manifesto is concerned, its main promise is NYAY. It's a bit up in the air. The numbers coming out are 1.5-2 per cent of GDP. Some others (CPI-M) are talking about increasing public health spending -states and Centre taken together - from less than 2 per cent to 3.5 per cent of GDP, so that's again a 1.5 per cent (of GDP) increase," says Sen. He says the BJP promise to expand the PM-KISAN Scheme is not new as it was there in the Budget too. There is a cut-off (farmers with less than two hectares land are eligible for direct income transfer of Rs 6,000 a year), but even after removing it, the increase will be relatively small as a large chunk of farmers will already be covered. "The real problem will be including landless labourers, which they have not committed. Then the number will go up dramatically. At the moment, you have put Rs 75,000 crore, and if you consider landless labourers, it will be double of that, and that will bring the number up to something like the NYAY. So, you are in the same range," says Sen.

Avik Saha, National Convener of the Jai Kisan Andolan of Swaraj Abhiyan, however, says the BJP has repeated the promises of its 2014 manifesto and not given account of earlier promises and work done. "The BJP is silent on two of our key demands, remunerative prices and freedom from debt," he says. "It merely mentions that the government will attempt to ensure that the markets offer farmers a fair price."

Siraj Hussain, former Agriculture Secretary, says the most farmer-friendly promise in the BJP's manifesto is commitment to invest Rs 25 lakh crore to improve farm productivity. The Congress promise to replace the Essential Commodities Act 1955 with a more contemporary law, repeal the Agricultural Produce Marketing Commodities Act and plan to set up a National Commission on Agricultural Development and Planning is a positive, he says.

All parties have talked about healthcare but the CPI(M) has promised free healthcare as a right, vowed to end private insurance-led healthcare and increase public expenditure on health to 5 per cent of GDP. "All of them are talking about health. The BJP is reiterating its Ayushman Bharat scheme on which its government has spent very little so far and which in any case is an insurance programme. The other extreme is to say we will spend 5 per cent of GDP. But even if they take it to 2-2.5 per cent, it will be a useful increase. So, parties have committed to an increase of 1 per cent of GDP, whichever way you look at it, on social sector schemes," says Sen.

The Swadeshi Jagaran Manch (SJM), an affiliate of the BJP's ideological mentor, the RSS, endorses the party's decision to not focus too much on doles. "The government is already giving more than Rs 5 lakh crore as direct benefit transfer under various social sector schemes. Any extra means reduction in these payments or increase in fiscal deficit. This has been a convenient method of Congress governments. Fiscal deficit, approaching 2.5 per cent of GDP during Atal Bihari Vajpayee's regime, started going above 6 per cent during the UPA government. If that is the approach, on the one hand you will be giving money to the poor, on the other hand you will be taking away that through inflation. The government should try to increase productivity. In that sense, I find the BJPs approach towards doubling of farmers' income better than the doles through NYAY," says Ashwini Mahajan, National Co-Convener, SJM. According to him, the BJP's promise of Rs 100 lakh crore investment in infrastructure is the best example of development without upsetting fiscal balance. "During Atalji's regime, we spent Rs 1,10,000 crore on roads and infrastructure but the government's contribution was only Rs 10,000 crore. The rest Rs 1,00,000 crore was domestic private investment. We have enough private money available domestically. The only problem is rate of interest. Once you bring prices under control, the rate of interest will come down, and funds will be available at a lower cost. The BJP's plan is to encourage private investment in infrastructure. And that is possible," says Mahajan.

Abhijit Sen says the BJP's plan to spend Rs 100 lakh crore on infrastructure, the biggest of all promises, is doable. "The point is that Rs 100 lakh crore is roughly 10 per cent of GDP. During 11th and 12th Plans, we had targeted 7 per cent of GDP. We spent around 6 per cent during UPA 1 and UPA II years. So, the BJP is targeting a 3-4 per cent increase. That is the kind of money some are talking about for health and education. The difference is that in infrastructure, it need not be public spending, because a lot of projects happen through the public private partnership (PPP) model," he says, adding the question is whether this is possible under the current scenario or not. "PPPs are not happening to that extent and investment vehicles like IL&FS are dead. Much of what could have been done through private investment may not happen."

While opposition parties can offer the moon, the BJP, which is considered as having a strong chance to retain power, is more careful in its promises. It has, hence, downplayed several promises in its manifesto five years ago. There is no mention of the 100 new smart cities promised in 2014. The 'Make In India' programme has also become low key. National interest and grand vision which Union minister Piyush Goel spoke about during the presentation of the interim Budget early this year is what has been carried over into the vision document. Manifestos and vision documents are for the moment just grand ideas for a better India, nothing more.

With inputs from Dipak Mondal