Business confidence slides in the first quarter of 2018/19 as businesses feel the pinch of GST and brace for policy inaction and higher interest rates, finds the latest Business Today-C fore Business Confidence Survey. It has been over a year since the implementation of the Goods and Services Tax (GST) and more than 20 months post demonetisation but the heat and dust has not settled. At least, that's evident from the latest Business Confidence Index (BCI) survey conducted in the April-June quarter. Some 65 per cent business leaders surveyed are unhappy with GST while another 64 per cent remain critical of demonetisation.

In the June ending quarter, the BCI - on a scale of 100 -- dropped marginally to 49.3, compared to 50.6 in the previous quarter and 47.3 in the quarter prior to that. Market research agency C fore quizzed 500 CEOs and chief financial officers across 12 cities for the survey. The fall in the first quarter of 2018/19 highlights the reversal of an upward trend that started in the September quarter last year. 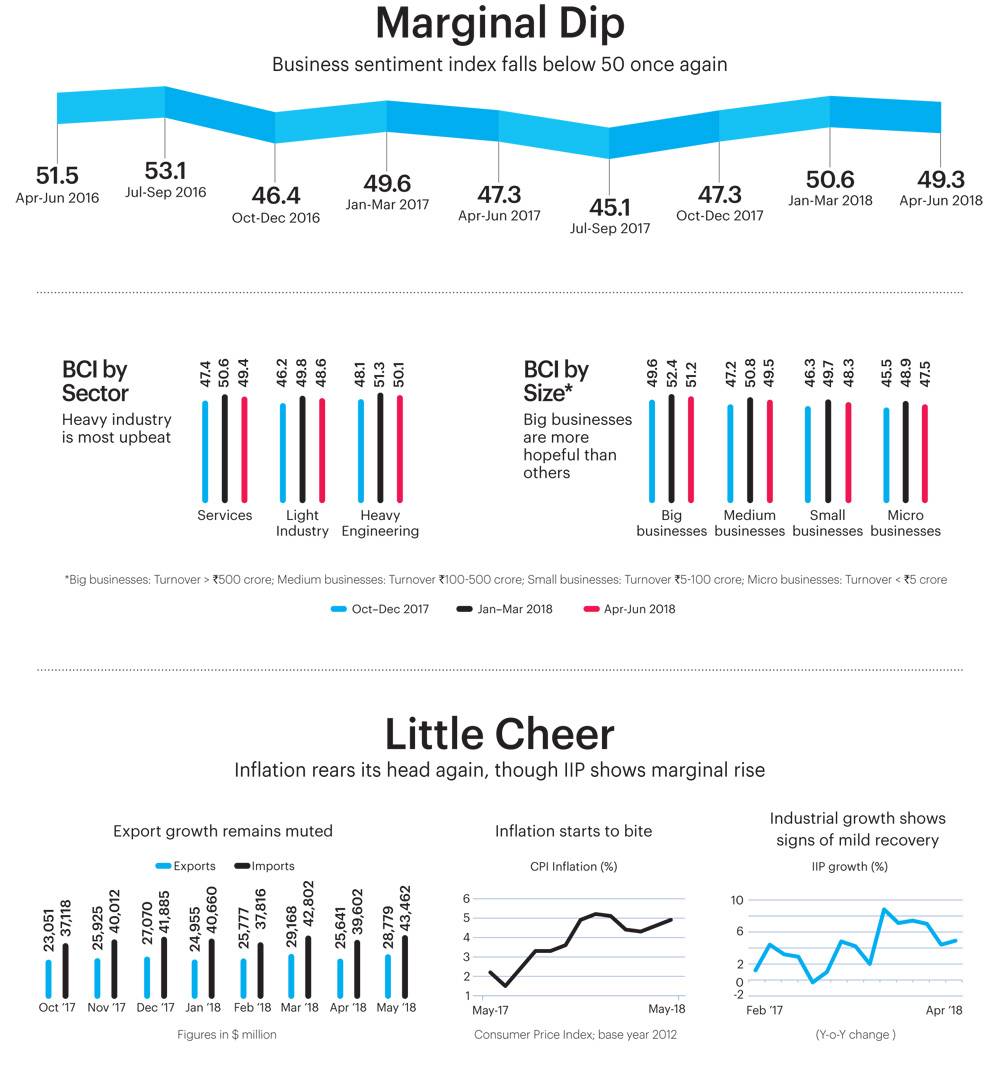 Most micro parameters of the survey have shown a decline as compared to the previous survey. These includes overall economic situation, financial situation, availability of finance, cost of external finance, cost of raw material, sales, production levels, order book, utilisation of production capacity and profits. For instance, 42 per cent respondents believe that availability of finance is going to be an issue in the July-September quarter. In the previous survey, the figure was 20 per cent.

Mangesh Soman, Joint President (Corporate Economics Cell) at Aditya Birla Group, says that availability of finance is likely to be affected going forward. "The credit demand is growing with the business cycle moving up. After the PNB (Punjab National Bank) scam, restrictions have been put on certain trade-related financing instruments. The public sector banks are dealing with NPA (non-performing asset) issues and will find it difficult to lend in a major way. In the case of private banks, their credit-deposit ratios are already at elevated levels - around 90 per cent in some cases. Their ability to lend more will also be difficult. As such, private banks have a preference for retail lending," he says.

Some 42 per cent corporate leaders are anticipating rise in the cost of raw material, compared with 15 per cent in the previous survey. "There has been an increase in energy prices but we are also seeing pick up in manufacturing activities. The weakening of rupee has also raised import costs. We hope that improvement in the manufacturing sector could offset the overall rise in input costs," says Kavita Chacko, Senior Economist at CARE Ratings.

The survey points out that 57 per cent of respondents expect policy inaction at the macro level over the next few quarters leading to the general elections. Experts say that the government is spending more on infrastructure ahead of the elections. "The higher public investments are aimed at reviving private investments. We are seeing early signs of brownfield investments picking up whereas greenfield investments are taking time to revive," says Aditya Birla Group's Soman.

According to the survey, 54 per cent business leaders are expecting interest rates to move up over the next few quarters. Last month, the Reserve Bank of India (RBI) raised the benchmark repo rate by 25 basis points after a prolonged pause of four years. 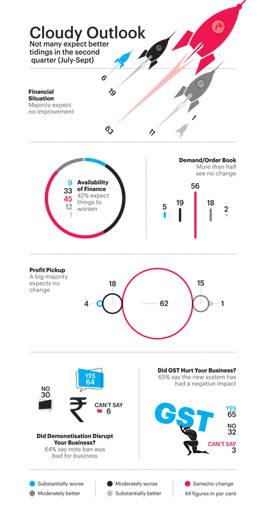 According to the survey, 44 per cent respondents see the possibility of double-digit growth for the Indian economy as envisaged by Prime Minister Narendra Modi. In the fourth quarter of 2017/18, GDP growth bounced back to 7.7 per cent, the highest in 18 months. Market observers say that the monsoon is going to play a big role in defining consumption, particularly rural consumption, in the months to come. Earlier, the India Meteorological Department (IMD) had predicted the season rainfall to be 97 per cent of the long period average (LPA). Rainfall in the range of 96 to 104 per cent of LPA is categorised as 'normal'. "We have to see how the monsoon will pan out. According to IMD, it will be the third consecutive year of normal monsoon," says Chacko of CARE Ratings.

As a supplement to the BCI survey, we carry out an assessment of other indicators of economic growth. These include macro-economic conditions such as exports-imports data, IIP (index of industrial production) and consumer price inflation (CPI). Core sector growth stood at 3.6 per cent in May as compared to 4.6 per cent in the previous month. CPI, on the other hand, moved up to 4.9 per cent in May, much above the RBI's medium-term target of 4 per cent. The industry expects the RBI to keep a somewhat hawkish stance on interest rates as long as there is an upward pressure on retail inflation.

Both exports and imports have a shown sharp rise in May. Exports, for instance, were up 12.23 per cent over the previous month to $28.78 billion. The survey highlights that 29 per cent respondents expect exports to improve in the September quarter while only 12 per cent foresee imports improving in the same period. The rise in imports has been partly attributed to softening of rupee.

While the fall in business sentiments might not be linked to any specific reason, the mood of corporate leaders is probably not in sync with improvements in the manufacturing sector and GDP growth estimates. It seems that India Inc. needs a compelling trigger to reclaim its confidence levels.

"In every city, there should be surplus housing"