Coffee Board has adopted blockchain in an attempt to provide an edge to growers and coffee from India
Rukmini Rao | Print Edition: August 11, 2019 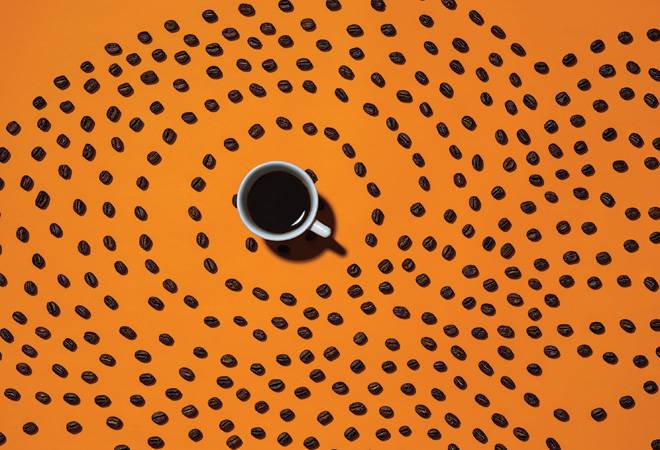 How much do coffee growers make from a cup coffee that costs $4 on streets of New York or London?" asks Srivatsa Krishna, Chairman and CEO, Coffee Board of India. Based on street shopping experience, I say 50 cents. He asks me to take another guess. Figuring that it could be lower, I come up with 35 cents. Srivatsa says, "All that they make is 4-5 cents on a $4 cup of coffee." That's just 1 per cent of the price charged in New York for the world's only shade-grown, hand-picked coffee and sun-dried beans, which fall under the mild category.

India, which began commercial coffee production in the 18th century, has 3,50,000 farmers who grow around 3,19,000 metric tonnes (in 2018/19) over 4,50,000 hectares. Despite it being among the top 10 coffee growing countries - over 80 per cent of the crop is exported - returns to farmers are minuscule. Growers have all along struggled to make extra bucks out of the coffee value chain.

According to the Coffee Board, cultivable coffee land in India, which was around 92,000 hectares in the 1950s, had grown to around 4,00,000 hectares in 2010. Since then, there has been little addition. Currently, coffee is cultivated by small growers (under 10 hectares). While cultivable area has stagnated, productivity has grown 10 times. "Our productivity was 100 kilograms per hectare in 1950. Today, we are at around 1,000 kilograms per hectare," says Srivatsa.

However, higher production has not been of much help to farmers, and that's what the Coffee Board is hoping to address by using blockchain technology. Blockchain is a distributed ledger technology which allows members to record transactions in a decentralised data log maintained on a network of computers rather than a physical ledger or a single database. The aim is the reduce the middlemen in the value chain. Ethiopia and France already do this.

Sahadev Balakrishna, former Chairman of the Karnataka Planters Association, says in a commodity business like coffee, trading margins are low, 1-1.5 per cent for exporters and curers. The bulk of the profit goes to roasters and retailers. "If a grower sells to a curer or roaster, the price realisation is much better." There are a number of middlemen clogging the coffee value chain in India. The number of middlemen could be three-six people depending on whether the coffee is for domestic consumption or for export. A blockchain marketplace could disrupt this.

On the Same Platform

The Coffee Board asked Bengaluru-based Eka Software, which offers commodity software, to develop a blockchain software. This is being tested as an app. The pilot, as of now, has 22 participants, which includes buyers, coffee roasters and growers. The stakeholders in the coffee ecosystem - which includes coffee farmers, traders, coffee curers, exporters, roasters, importers and retailers - have to register. Growers can offer any quantity and quality at their expected price for sale. The buyers can either agree to buy at the said price or make alternative offers. Once both parties agree on a price, the transaction is completed.

Blockchain provides a real-time secure framework for sharing ledgers and transactions, a digital ID that follows a physical product, smart contracts, and also the source of record accessible to all parties, making the platform transparent.

Nishan R. Gurjer, a sixth generation coffee grower and exporter who opted to be a part of the experiment, says the entire coffee industry is seeing a shift. "The coffee world is moving away from the traditional middlemen. Right from the origin to the attributes of coffee beans, from taste profile to carbon footprint, blockchain provides key information that consumers are seeking," he adds. The grower provides this information and it is certified by the Coffee Board.

More importantly, growers have a bigger say in the price they get. "With the grower getting less than 10 per cent of the value, blockchain addresses the issue of transparency and gives better bargaining power for good coffee," adds Gurjer. Though the blockchain platform is at a nascent stage, Gurjer says he is seeing more enquiries than before, and the democratic pricing gives him more comfort.

Second, the technology also provides agility and scalability. Even though the platform currently does not have an in-app payment option, it is likely to be integrated shortly.

Manav Garg, CEO and Founder of Eka Software, says the building applications on blockchain have been simplified: one can define the fields where data has to be captured, and set rules regarding who can create a record and who can modify. "You can deploy the contract quickly. The whole infrastructure is fairly distributed and there are miners who check them to verify legitimacy," says Garg. Agility also comes from the fact that multiple versions of the contract can be deployed and changed to stay in step with evolving contract regulations. "For example the current coffee marketplace has gone through several modifications since the work began. When we started discussions, the model envisaged was a bid-ask system like in any stock exchange. Later, we became grower centric so that buyers don't bring down the price. Later, buyers also wanted better control, so the model was tweaked to enable them to start contracts. On blockchain, it was fairly easy for us to modify and migrate through these multiple models," Garg adds.

For growers, the platform provides democratic pricing. He can quote a price and negotiate discreetly with the buyer, with other growers not knowing the final price of the coffee, hence offering a better chance of higher price realisation for specialty coffee.

The government, too, is taking some steps to support the coffee market. In a bid to increase value and traceability, the Department for Promotion of Industry and Internal Trade recently awarded five new geographical indication (GI) tags - Coorg Arabica, Chikmaglur Arabica and Bababudangiris Arabica from Karnataka, Wayanad Robusta from Kerala and Araku Valley Arabica from Andhra Pradesh.

The franchise of the Coffee Board's quick service restaurant India Coffee House has been given to two private players - Cafe Coffee Day and Afoozo group - for a facelift. India will also host the prestigious World Coffee Conference, the first ever in Asia, in September 2020.

With low prices for coffee expected to continue, Indian coffee growers now stand at the cusp of technology adoption and creation of a brand identity as India readies to serve a fresh brew to the world.