Staring Down The Furnace

The steel industry is feeling the pinch of the protracted slowdown in construction and auto sectors, two of its biggest clients. Will it be the next domino to fall? The prolonged slump in demand for automobiles in India and slowdown in investments in the infrastructure sector have started hurting steel manufacturers.

The growth in steel consumption in the country - measured as apparent steel use (ASU) - dropped sharply from a healthy 6.3 per cent at the start of fiscal 2019/20 in April to a worrisome 1.7 per cent in August.

The biggest impact has come from the slowdown in the domestic automobile industry where sales have been under pressure for more than a year now. Automobile sales have declined 15.9 per cent in this fiscal so far. At a more micro level, passenger vehicles are down 23.54 per cent, commercial vehicles 19 per cent and two-wheelers 14.85 per cent. As the second-largest steel consuming industry, this slowdown has affected many secondary steel makers in the country. In Jamshedpur, for example, a steep reduction in production at Tata Motors' heavy truck and bus factory has resulted in shutting down of at least 12 secondary steel plants in the region while another 30 are on the verge of closure.

"Steel touches all parts of the economy. Around 20 per cent steel is consumed by the auto sector. That is certainly something that has played out over the last three months," says T.V. Narendran, Managing Director and CEO, Tata Steel. "So, as far as the international market is concerned, things are a bit soft. The problem is less about international steel flows and more about domestic demand."

There has also been a slowdown in investment in the infrastructure sector, which is the largest consumer of steel in the country. Over the last few years, infrastructure spending in India has been propped up solely by the government as liquidity crunch in the banking system stymied the ability of private players to invest. That is ending now. There is lack of buoyancy in tax collections - which dropped from 7.3 per cent of GDP in 2010/11 to 6.9 per cent in 2018/19 as a result of the consumption squeeze. There is also the compulsion to stick to fiscal deficit - tightened from 4.8 per cent to 3.3 per cent of GDP between fiscals 2011 and 2020.

The government has little choice, and spending on infrastructure has taken a hit. Since 2010/11, the central government's total expenditure (both revenue and capital) has declined sharply from 15.4 per cent of GDP to 12.2 per cent in 2018/19.

The capital expenditure component has dropped from 2 per cent of GDP to 1.6 per cent and that of revenue expenditure from 13.4 per cent to 10.6 per cent. Clearly, there is a mismatch as production cuts in the steel industry haven't kept pace with slackening demand. As a result, inventories have started piling up. According to the Ministry of Steel's Joint Plant Committee, the opening stock at the start of the fiscal in April was a reasonable 8.77 million tonnes but it swelled to 14.335 million tonnes as on August 31, 2019. Typically, the industry carries an inventory up to a month's sales of around 8.5 million tonnes. The present inventory covers over 50 days.

"There is accretion of inventory of six million tonnes on the one hand, while on the other hand, the growth in demand has slowed down. So, it will take even longer to liquidate this excess commodity in the market," says Seshagiri Rao, Joint Managing Director and Group CFO, JSW Steel.

The impact on prices, which dictates profitability in the industry, is already visible. Since April, prices of hot rolled coil in India declined by more than 7.6 per cent to Rs 47,506 per tonne in end-July from Rs 51,404 per tonne in April. From the peak of Rs 57,731 per tonne in October 2018, the fall is nearly 18 per cent. At the same time, prices of the two major raw materials used in steelmaking - coking coal and iron ore - increased during the first quarter of this financial year. With user industries automobiles and infrastructure being hit by a slowdown of an even greater magnitude, steel companies could not pass on the higher costs to them.

According to a report by rating agency ICRA, over the last four quarters, operating profit margins of the domestic steel industry have been on a slippery ground, declining steadily from 22.6 per cent in the first quarter of 2018/19 to 18.2 per cent in the same quarter of 2019/20. This downward trend in profitability is expected to continue in the second quarter of the current fiscal as well as margins get squeezed further due to weakening domestic steel consumption and bleak outlook for global growth amid escalating trade wars. "Steel prices have been going southwards across most steel consuming hubs globally, be it the US, the European Union or Asia. We have seen Chinese hot rolled coil spot export offers declining by around 13 per cent since the start of 2019/20. In India, spot hot rolled coil prices hovered around $462 per mt (about Rs 33,200) in end-August 2019, levels last seen during June 2017, when much of the industry was in distress," says Jayanta Roy, Senior Vice-President and Group Head, Corporate Sector Ratings, ICRA. "Not surprisingly, the steel spreads have witnessed a significant contraction in 2019/20 thus far compared to 2018/19. This leads us to believe that in the current fiscal, unless steelmakers are able to supplement weaker margins with higher sales, a decline in earnings over the 2018/19 highs is likely."

With the overall Indian economy registering a subdued 5 per cent GDP growth in the first quarter of this financial year - the slowest in a quarter in six years - most analysts see little hope for a quick turnaround. They have started revising downwards their growth estimates for the sector. Increase in steel demand generally follows GDP growth, and the slowdown in domestic steel consumption growth to 5.7 per cent in the first quarter of this fiscal, against much higher rates of 7.5 per cent (2018/19) and 7.9 per cent (2017/18), only corroborates the pattern. 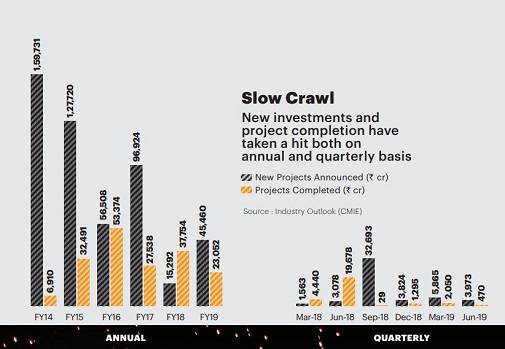 Ratings agency Moody's, which changed the outlook for the Asian steel industry from stable to negative in late August, says margins in this industry in this region have declined by nearly 8 per cent in one year to June 2019 and may fall by another 15 per cent in the 12 months to June 2020.

EBITDA (earnings before interest, taxes, depreciation and amortisation) per tonne of Tata Steel's Indian operations will likely decrease by a mid-single-digit percentage over this period, while for JSW Steel the decline will be around 13 per cent and remain lower than Tata Steel's Indian operations, largely because of elevated raw material prices and the company's relatively limited backward integration.

There is one silver lining though. In recent weeks, raw material prices have started to come down. Seaborne coking coal spot prices plummeted by a steep 25 per cent between May and August of 2019. This will start reflecting in the balance sheet of steel companies by the third quarter of this fiscal. That may provide a cushion, but if overall consumption does not revive, it may not count for much.

"The only positive in the last one month is that raw material prices have started adjusting. So, we have seen a fall in coal prices, which will reflect in the raw material consumption of companies in the next quarter, not this quarter," says Rao of JSW Steel. "We don't need anything specific from the government. It just needs to do what it has already promised - release all pending payments to contractors on various government projects, make all GST refunds and accelerate infrastructure spending, because today no private sector investment is happening in the country. There is also a huge amount of reluctance from bankers to lend even when they say liquidity is not a problem. If the demand really picks up, led by government spending, and the liquidity situation eases, we can see a quick turnaround."

There has been much buzz about a possible cut in the tax rate on automobiles in the next GST council meeting on September 20, but that looks increasingly unlikely. On September 10, Finance Minister Nirmala Sitharaman instead promised to try to front-load infrastructure spending in the country to the extent possible in the days to come. The domestic steel sector's fortunes will depend on whether she keeps her word.