There are over 300 co-working operators in India. Can they survive? 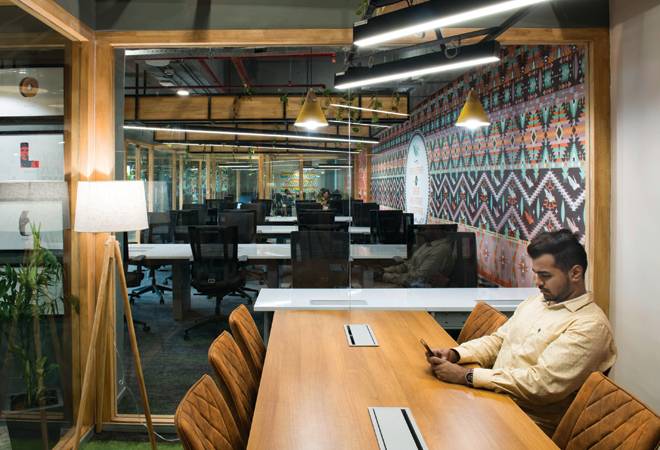 One of the floors of GoWork's co-working facility in Gurgaon's Udyog Vihar has sleeping pods - private rooms with air conditioners, televisions, music systems, and lockers inside. A 'frustration zone' is in the works too.

"Millennials take too much stress. We have created a room where they can come and break stuff," says Sudeep Singh, CEO of the company that started two years ago. Users can wield a sledgehammer to smash old computers and mobiles. "I am thinking of getting old cars," he grins and says. "We also offer a gym, a yoga studio, a cafe and a bar. We have a full-time licence for running a bar."

GoWork started with the idea of creating a culture of walk-to-work, and staying and working in the same place. The company operates two large facilities in the Gurgaon location. One can seat 8,000 people and the second has a capacity of 5,000. "The concept of shared economy is growing across the globe. Today, millennials prefer Uber over cars and Oyo and Airbnb over hotels. This is a big cultural change. My idea is to play on it," says Singh.

There is another reason why co-working operators are rushing to offer facilities of all sorts. It is difficult to differentiate between the players and every extra bit counts. Co-working, after all, is a jazzed up business centre with a mix of seats. Most players offer flexible seats, where the same desk is not assured every day. These seats, mostly used by gig workers, are also the cheapest. Next, there are fixed seats in sprawling, well designed open spaces that start-ups love, and finally, cabins for corporate customers, which are the costliest. Some co-working operators let out the entire floor to a large enterprise customer. Co-working spaces, however, are different from business centres because of a 'community' layer that all companies invest in - every occupant is typically connected through an app, where they can seek business or personal collaborations.

Differentiation has also become difficult because there is a clutter. A JLL-Ficci white paper titled 'Co-working: Reshaping Indian Workplaces' pegs the number of players at 325-330 in the top seven cities of India alone. Other estimates say the number could be as high as 400. There is a clutter phonetically, too. The international big daddy of co-working is WeWork, a strong player in India as well. And then, there is GoWork, CoWrks, Smartworks, BuzzWorks and InnoWork, among others.

Never mind the similar sounding names. The larger question is whether there is space in the market for over 300 players. In some ways, the co-working industry resembles the food-tech bubble of 2015/16. After it burst, the stronger companies consolidated their share. Co-working, unlike e-commerce, is a tad different. There is a real asset with some value. Still, the market could see bloodbath over the next two years.

Singh is among those who believe that a bubble is building up. "It has become a 'son' rising industry," he jokes. "If a son is good for nothing, get him to start co-working on empty real estate." Ritesh Malik, founder of Innov8 Coworking, estimates that there are 311 players in the industry, most of which, about 290, operate with only one campus. "They won't be able to sustain. Co-working is not a one-shop business. Ultimately, the top 10 players will survive," he says. Innov8 was recently acquired by Oyo in an all-cash deal, speculated at Rs 220 crore. Malik did not confirm the number or other deal details.

From the supply perspective, the barrier to entry is low. Anyone with a large basement can open a co-working space. The other reason why land owners are interested in co-working is stagnant property values.

"The first 65 years (since independence), when land was growing in terms of appreciation, everyone wanted to invest in land. Then 10 years ago, people started investing in assets. But in the last five years, the assets have not appreciated. They have been stagnant in terms of value. Property tax and maintenance on an empty asset starts hurting," says Amit Ramani, CEO of co-working operator Awfis. "The ability of the non-professional land owners to sell these assets is a challenge," he adds. Co-working companies go to these land owners with a business model; and say that they can generate demand and deliver. There are different levers of demand. Start-ups get a main street address at one-fourth the cost, and, over the last decade, a large number of millennials have joined established enterprises, forcing these companies to adapt.

"Costs are a big part of this but corporates don't admit it. They save 15-25 per cent (versus setting up their own offices) when they get into co-working," says Harsh Lambah, Country Manager of Regus, which operates service offices and co-working spaces. When corporates set up and invest in their own facilities, there is an opportunity cost as it takes time to source and fit out a facility. "In co-working, you can expand or contract the number of seats. In some countries, we do well when the economy is not doing well," says Lambah.

The slowdown in India may, therefore, be good news for the co-working industry, but only for the bigger brands, with scale and consistent levels of service since enterprise customers have strict service level agreements. Those reliant on start-up clients and very small companies may see a higher churn. Unable to fill up capacity in quick time, they would bleed. Many co-working operators sign nine-year leases with land owners and have other fixed expenses.

Co-working in today's context is a mix of real estate, hospitality and technology. Many liken co-working facilities to a day hotel where the level of service expected are of a very high standard, everything from Internet connectivity to how the notepad and the pencil are placed in a meeting room. Technology is about connecting the users. Very few companies have the know-how in all the three.

There are four predominant models in the co-working industry. First, the land owner himself starts a co-working centre. Second, a joint venture model where revenues and profits are shared between the land owner and the operator. This model is also the least risky because the owner foregoes rentals for a larger chunk of profits and also invests in the fit-outs. The third model is the management-operator model, like in a hotel. The owner takes the operational and capital risks. Co-working operators act as the management operator and charge a fee. The last model is a long-term lease agreement with the land owner; this is the most risky. The co-working operator, in this case, pays a security deposit, invests in the fit-outs, and pays a monthly rental. Smaller companies are the most vulnerable given the quantum of investment that is required. The rentals, depending on the location, can range between Rs 70 a sq. ft. and Rs 150 a sq. ft. So, for a 100,000 sq. ft.-facility, the monthly rental would be Rs 70 lakh-1.5 crore. The capex required for fit-outs could be Rs 1,500-3,000 per sq. ft.

The key to profitability in this business is managing rental, says Karan Virwani, Co-CWeO, WeWork India. The larger companies have the muscle to bargain harder. "Your raw material is the rental. You need to get the best deal on that. Then it is about the efficiency of the operation. How to keep the cost of cleaning, the consumables, all of that to a level where it makes economic sense," he says.

In India, WeWork is a joint venture with the Embassy Group. The Embassy Group has always been a 'landlord'. With co-working, it is a 'tenant'. But being an established developer gives it the advantage of having an insight into the prevailing rents in many markets, and relationships with brokers. "We changed the way deals are done," says Virmani. "Land owners don't do zero deposit deals but we do only zero deposit ones. The market takes 10 months' security deposit. We don't do it, or do very less. We negotiate hard with them," he adds.

Those who pay high rentals on long-term lease are under pressure to fill up the capacity quickly and often under-price or undercut competition. "My team was poached, and other players sold seats at 40-45 per cent of our pricing," says Lambah of Regus. "Everyone now realises that to open one facility in one locality is easy. But to build scale is difficult. The new companies also went for occupancy from the word go - that was a problem because once you fill your centre you don't have the opportunity to create new revenues, which come from new customers. Many of these companies have issues in terms of investments and funding. Many are also not in a position to pay rents and salaries," Lambah adds.

Scale, says Malik of Innov8, is important to make operations efficient and reduce funding pressure. Scale players can drive a better bargain with vendors, and in fitting out the space. Those multiple locations in a city or even one micro-market can share human resources such as community managers. "I went to Y Combinator (an American seed accelerator). I met many founders. They pointed out that we won't be able to scale up unless we take up big campuses. This business requires one to leverage economies of scale," says Malik. "That is why we took a conscious call to not have less than 700-1,000 seat facilities. Now we are doing campuses of 2,000 seaters," he adds. Overall, Innov8 has 20 active and under-construction centres with 15,000 seats.

The size of a typical co-working space in India is about 30,000 sq. ft. Smartworks says it doesn't lease properties less than 1,00,000-1,50,000 sq. ft. "We like leasing the entire building versus a few floors. Our tenure is two-and-a-half to three years. That gives me a lot more stability in cash flow," says Harsh Binani, Co-founder of the company. Smartworks started in 2016 and has been profitable for nearly a year, says Binani.

Smartworks focusses on the enterprise workforce customer rather than start-ups. Its buildings have lesser number of clients because one enterprise takes a larger space. "On average, we have 250-280 seats allotted to a customer. The more I sell, the more efficiency I can get. If I sell 20-30 seats, there is a lot of wastage that happens in between. We have also done a lot of R&D on our capital and operational expenditure. It is among the lowest in the industry," Binani says.

Capital expenditure on fit-outs and operational expenditure on running the centre are critical to determine the selling cost of seats. "We have optimised these expense heads. We use standardised brands in fit-outs, like Daikin for air conditioners. Because of our large scale, we directly deal with manufacturers. We have been able to cut down the price to a great extent. The fit-outs are also modular and can be reused across clients," adds Binani.

The future holds more consolidation, which is already brewing. "Compared to food-tech, this is a highly capex intensive business. Players of scale will be limited. Those with scale are likely to be the ones that will attract attention from the ecosystem, customers and investors," says Malik.

What attracted attention in 2018 was the euphoria around the rise of a new industry. That's now over. For co-working operators today, it is clearly about who has a real business and scale.

"There Is No Question Of Me Not Meeting The Deadline"