Why India dithers on the mega trade deal 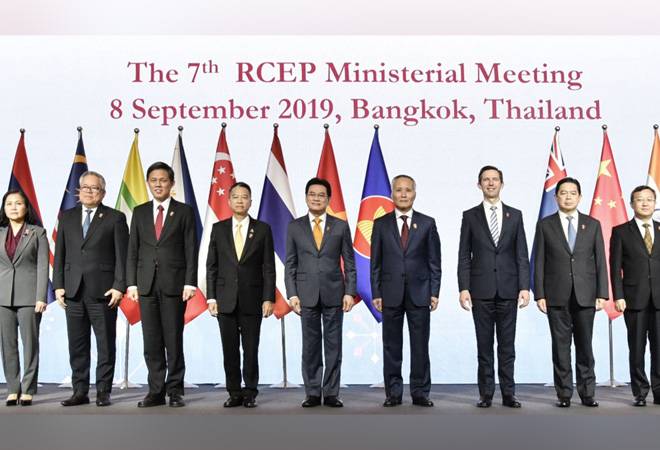 On November 4, Prime Minister Narendra Modi will join heads of 15 other nations, negotiating partners of a mega free trade deal, the Regional Comprehensive Economic Partnership (RCEP), in Bangkok for the third Leaders Summit under RCEP. The meeting is expected to mark the finalisation of RCEP, a trade deal being negotiated among the 10-country Association of South East Asian Nations (ASEAN), China, Australia, New Zealand, Japan, South Korea and India for the last seven years. If signed, RCEP, whose countries' cumulative gross domestic product (GDP) is $49.5 trillion, or approximately 39 per cent of global GDP, will be the world's largest economic bloc.

Unlike most other partners, India is yet to make up its mind on whether or not it should join. As things stand now, it may join immediately, opt out temporarily with a promise to join later or join and not ratify the deal (which will make it inoperational for all practical purposes). In all likelihood, at Bangkok, India will be uncertainty personified.

Why is India finding it tough to make up its mind even after seven years of negotiations and hundreds of stakeholder consultations? Why can't it say yes if the deal is good, or no if it is bad? The answer lies in the very nature of the deal and its sheer size and scope. India's dilemma arises out of the possible impact - both opportunities and threats - on internal and external trade, investments, intellectual property rights, manufacturing capability and ability to frame and enforce laws to control the flow of data from electronic transactions. Further, India's experience with past free trade agreements (FTAs), including with ASEAN, South Korea and Japan, has not been encouraging. But the biggest trouble is the presence of China, India's biggest trade partner with which it already has a huge trade deficit. With the hit the domestic industry is taking from cheap Chinese imports, opening up a tariff-free route for it is the last thing India can afford. "India ran a merchandise trade deficit with 11 out of the 15 other members of RCEP in 2018/19 totaling $107 billion. India's overall merchandise trade deficit was $184 billion. China is the biggest trade partner among these countries. In 2018/19, 34 per cent of India's imports were from this region, while only 21 per cent of India's exports went to this region," Soumya Kanti Ghosh, Group Chief Economic Adviser, State Bank of India, has said in a report. For example, in agri imports, India imports only a meagre amount in milk and dairy products. "However, imports of these products could rise if New Zealand and Australia succeed in negotiating reduced duty on dairy products. Also, there is a fear that imports of cheaper electronic and engineering goods from China could increase further," he says, adding, "Alternatively, if other countries go ahead without India, we could miss becoming part of global supply chains for high-end goods such as electronics and engineering. India will reap the benefits of this deal only if it builds its capabilities."

The odds seem tilted in favour of a no or delayed deal, at least for now.

In 2011, ASEAN leaders decided to explore the possibility of an umbrella trade agreement covering all its members and ASEAN's FTA partners. The negotiations began in 2013. After missing a 2015 deadline, the countries decided to conclude a modern, comprehensive, high quality and mutually beneficial RCEP by 2019. "At present, the RCEP participating countries (RPCs) are negotiating 25 chapters, which include issues such as electronic commerce, competition and disciplines on small and medium enterprises which have not been included in the World Trade Organization, largely because developing countries have argued that the proposals for inclusion of these are detrimental to their interests. Thus, when formalised, RCEP will be the most expansive regional trade agreement that India has ever negotiated," says Biswajit Dhar, a trade policy expert who teaches at the Jawaharlal Nehru University.

Trade agreements, whether bilateral, regional or multilateral, are about reducing tariffs and non-tariff barriers to facilitate trade. And that is what the RPCs have been trying to do through 28 rounds of negotiations and nine RCEP inter-sessional ministerial meetings. The last official communication from India's commerce ministry said that by the end of 28th round of negotiations at Da Nang in Vietnam, from September 19-27, there was agreement on 21 of the 25 chapters. Only chapters on investment, electronic commerce, rules of origin and trade remedies were left. The government, however, is silent over the level of tariff reduction that has been agreed upon. Two persons associated with the negotiations hint that India is likely to have agreed to bringing down all tariff lines (from 11,000-plus tariff lines or different product categories that are traded globally) that carry an import duty of 0-5 per cent. While 90 per cent tariff lines will bear concessional rates if not zero duty for products originating from ASEAN nations (Brunei, Cambodia, Indonesia, Lao PDR, Malaysia, Myanmar, the Philippines, Singapore, Thailand and Vietnam), it will be 80-90 per cent for other countries except China. And the rates will be effective immediately after the agreement becomes operational in India. In case of China, India will offer duty concession on 80 per cent of tariff lines, but in several phases spanning 20 years. The authenticity of the tariff plan could not be independently verified. Officials declined to speak saying the consultation is on. Last heard, on October 22, there was an agreement on some pending chapters, too, particularly e-commerce.

The most visible benefit for Indian exporters will be better access to markets of RCEP members, particularly China, Australia and New Zealand, as India already has trade deals with the other RCEP countries. Representatives of Indian pharmaceutical companies say they are anticipating market opportunities in China as it is the second-largest medicine market in the world after the US. However, they are not willing to come on record as the specifics of the deal - both tariff and non-tariff concessions - are not known. Cotton yarn exporters also say that prospects of exporting to China may improve as there will be a level-playing field for them vis-a-vis other importers. "As an exporters' organisation, we are for RCEP. The RCEP members' combined trade is $2.8 trillion. If we do not join we will be at a disadvantage in such a big market. We are all for market access," says Ajay Sahai, Director General & CEO of the Federation of Indian Export Organisations. This opinion cuts across sectors, he says. "If you are looking at pure exporters, they cannot have any problem. If you are required to import inputs, you are getting it duty-free, and assuming you are exporting, you are getting better market access. So, it is not a sector-specific issue. Every sector will be comfortable if the companies have substantial exports. The actual concern will be for those who are only in the domestic market or predominantly in the domestic market," he adds. The FIEO has not gone overboard with its support to RCEP as it wants the government to safeguard the interests of industries that cater to local markets, too.

While none of the specific industry players is willing to openly endorse RCEP, there are many who are voicing concerns. Automobile makers are disappointed, the dairy sector, especially Amul, is rebellious, and every industry association, including the Confederation of Indian Industry (CII), are cautioning the government against going ahead without sufficient safeguards. The call is for cautious engagement with sufficient safeguards to protect the domestic industry as much as possible. The problem, as former commerce minister Suresh Prabhu says, is that there cannot be global trade if every country tries to protect the domestic turf from imports. A middle path - give and take - is inevitable.

One problem India has been trying to sort out is the issue of base year. Majority RCEP negotiators want tariff reduction to happen from rates prevalent in 2013, the year the negotiations started. India finds this problematic as during 2014-19 it has increased import duties on dozens of products to give protection to its industries. If the base year is not 2019, these protections will prove to be short-lived. The second issue is rules of origin. The current provisions make circumvention easy. Several Chinese products are suspected to be reaching Indian shores through countries with whom India has a free trade agreement. Post RCEP, China could route its products (on which India maintains high tariffs) through other member nations, trade experts fear. The Ratchet provision is another contentious issue. While India wants freedom to increase tariffs if there is a surge in imports from other RCEP members, not many are supporting this. They want lowering of tariffs to be unidirectional. India is also raising a demand for localised data storage and permission to keep agriculture and dairy sectors in the exclusion list. These are yet to be sorted out.

If industry is okay with RCEP if it takes care of their concerns, civil society groups, especially the Swadeshi Jagran Manch (SJM) - a constituent of the RSS, are not. Ashwani Mahajan, Co-convenor, SJM, and one of the strongest critics of RCEP, wants India to have no truck with the deal. The SJM had organised a nationwide protest against RCEP between 10th and 20th October in all district centres. "RCEP will effectively function as an FTA with China. The trade deficit with China is an alarming $54 billion. It is a well-known fact that non-tariff barriers are the main reason for denial of market access to India. There is nothing in RCEP to effectively discipline non-tariff barriers (such as Mutual Recognition Agreements). The exclusive focus on tariff reduction will bring an end to Indian manufacturing," says Mahajan. Terming India's suggestion for an auto trigger safeguard mechanism to trim import surge as too optimistic, Mahajan wants India to abort plans for safeguard mechanisms after giving up its policy space on tariffs.

In another two weeks, it will become clear whether India has listened to totally anti-RCEP voices or moderate voices. The last thing that every Indian stakeholder wants is signing of RCEP for political gains or under geopolitical compulsions.