To The Edge Of The World

A mystical Antarctic retreat on a luxury cruise can turn out to be a great learning experience
Vasim Shaikh   New Delhi     Print Edition: October 20, 2019 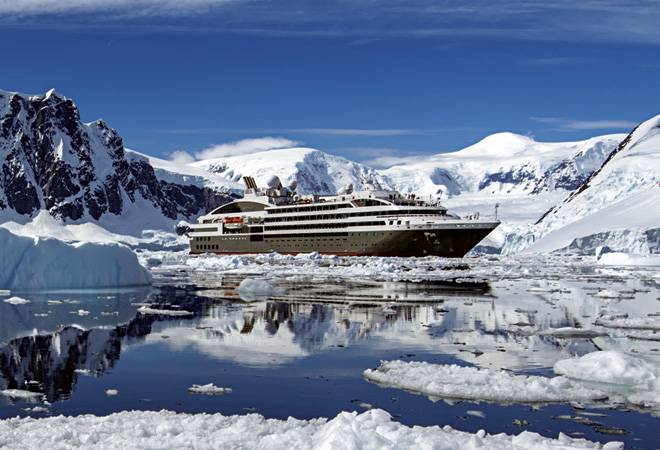 For two days and nights, our luxury cruise crossed the Drake Passage, the confluence of Atlantic, Pacific and Indian oceans

A mystical Antarctic summer dawned on us. I took the journey to the White Continent across vast stretches of wilderness, pure and white. Into the unexplored expanses of the Far South, dotted by blue icebergs, grey glaciers and white peaks, it was enthralling to see the looming heights of the snowscapes as well as the impenetrable depths of the seas.

I started my journey at Ushuaia, the southernmost gateway to the Antarctic. We imbibed the porteno magic of the city and visited the Tierra Del Fuego National Park. Then began my tryst with ice. For two days and nights, The Majestic Explorer, our luxury cruise, crossed the Drake Passage, the confluence of Atlantic, Pacific and Indian oceans, giving us the rather unique accomplishment of having journeyed across the three oceans in a single voyage. "This is one short of going to Moon. For me, this is ultimate!," an elderly person on the journey, the Chairman and MD of a reputed bank, told me. Interiors of the ship

I cannot describe in words the experience of setting foot on the icy continent for the first time, the No Man's Land that was to be the canvas of my adventures. I could not fathom how a desolate wilderness could move me so deeply. It was a blessing to be standing where I was.

Antarctica is home to colonies of eight species of penguins, the Gentoo, Chinstrap, and many more. An awestruck traveller exclaimed how she never knew there were so many existing species of penguins! Pods of humpback whales hummed in the distance while leopard seals relaxed on ice. Terns and petrels hovered over the softly lit blue Antarctic skies. The midnight sun never set on the 11 days of the cruise as we rang in the New Year with the penguins, sipping a glass of champagne on the balcony of the Emperor Penguin suite. The experience was calming and mystical. The height of opulence was the gala New Year dinner headed by a Michelin Star chef on board a remote wilderness.

The learning never stopped. A team of naturalists and polar experts on board guided us on daily zodiac excursions and conducted informative talks and seminars on board. Expedition leader Jean Louis Etienne enthralled with stories of the path-breaking feat of the 1990 International Trans-Antarctica Expedition, a 6,300-km hike on ice by foot. We were scaling up a small mound of snow when setting foot on The White Continent with the naturalist who was guiding us. While climbing uphill, suddenly, she took a few steps back and picked up something. I asked her what it was. She told me it was merely a strand of hair but one should not leave behind anything as it can alter this remote wilderness untouched by civilization. This left an indelible impression on my mind. I was in awe of how environmentally conscious we should be in everyday life. Antarctica is a treat for all the senses. It is a complete experience that envelops your entire being even if for a few days. After having travelled to the 7th largest continent time and again, Antarctica is now more than a journey to the end of the world, it is an emotion. To share it with travellers on board from different walks of life, from the age group of five to 75 years, has always been overwhelming. After all, what is the journey that can awaken the memory more than a polar voyage to the end of the world? I thoroughly feel that the travelogue of the new-age world traveller, who looks for an authentic and indigenous experience ensconced in luxury, is incomplete if he has not been to the end of the world. My experiences on The White Continent unfolded into a magnum opus and I felt I had been following the trail of legends such as Amundsen and Ernest Shackleton en route a magical polar adventure.

Dances With The Daffodils