The rising popularity of natural products has triggered a wave in the organic milk market. But there are challenges.
K.T.P. Radhika | Print Edition: July 29, 2018 Triptur, A small hamlet about 150 km from India's Silicon Valley Bangalore, greets people with its green coconut plantations. Life is calm and serene in the village that is home to Karnataka's largest copra market. Triptur is now hogging headlines for another stream of business. Around 160 organic dairy farms under the brand Akshayakalpa have been operating in this region for the past eight years. Everyday, more than 15,000 litres of milk is collected using milking machines, preserved in chillers that are maintained at 4 degree Celsius, transported to Bangalore and distributed directly to the consumer within eight hours, farm fresh.

Akshayakalpa is one of the many new generation 'farm to home' dairy companies that have mushroomed in Indian metros and Tier-II towns. Mostly owned and operated by young 'professional milkmen' who have quit jobs in multinational IT companies, investment banks, management companies et al. to take up the business, these enterprises are creating a churn in India's organic milk industry in particular and the milk sector in general.

India is the world's largest producer and consumer of dairy products. According to market research company IMARC, the milk and dairy products industry reached Rs7.9 lakh crore in 2017. In 2016, the milk sector alone was valued at Rs3 lakh crore and is projected to scale Rs7.3 lakh crore by 2021. "Currently, the organic dairy industry accounts for less than 1 per cent of the total dairy market in India. The segment is expected to grow steadily in the next three to five years," says Aarthi Janakiraman, Industry Manager, TechVision, Frost & Sullivan.

Organic farm fresh milk market is a very niche segment in India as of now. Industry experts define it as milk from animals that are given organic feed, not injected any growth hormones for more milk production and are free of antibiotics. The recent uptick in the general awareness on organic products is driving growth in the organic milk industry. "Consumers are more health conscious now. This is fuelling growth for organic and natural products among high-income group and the upper middle class and is one of the main growth drivers for the organic milk segment," says Anzeer Ali, partner of Chennai-based Maram Milk.

Adulteration of milk is another factor that prompts many consumers to turn to organic dairy. Milk is one of the most adulterated segments in India. "About 68 per cent of the milk produced in India is found to have adulterants like detergent, starch, urea and white paint," notes Dr J.V. Parekh, Founder, Parekh Technical Consultancy Services, a Mumbai-based dairy consultancy. Along with this, chemically enriched feed and fodder given to cows and buffalos will also affect the taste and nutrition of milk. "Organic milk is wholesome, healthier and contains higher vitamin E, carotene and calcium," says Parekh.

Chennai-based chartered accountant Renjini Iyer, a consumer of organic milk for the past six months, says that organic milk's freshness and the fact that it is free of preservatives and chemicals prompted her to turn to farm-fresh milk. "You will get it door-delivered and can manage subscription and order for additional requirements through WhatsApp, which is very convenient for city-based working women," points out Iyer. 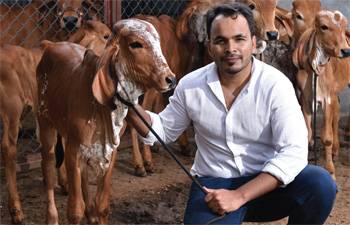 The trend is catching up in Tier-I and Tier-II cities as well. Most of the customers for the farm-fresh organic milk currently are people who have higher disposable incomes, says Rajeev Yadav, Founder of Delhi-based Whyte Farms. "More than 80 per cent of our customers are professionals such as doctors or people working in the corporate sector and do not mind paying a premium for pure, farm-fresh wholesome milk." Whyte Farms has a 25-acre farm in Alwar, Rajasthan, and has invested around Rs3.5 crore in setting up automated facilities, including imported massaging equipments for 150 Holstein cows. Holstein cattle is known as the world's highest production dairy animals.

"Our milk is certified by the Food Safety and Standards Authority of India (FSSAI)," claims Yadav, who holds an electronics engineering degree from the US and had worked with a construction company before venturing into organic dairy. Many Indian farms have only Holstein cattle while some have both Indian AND foreign breeds. For example, Maram Milk company has Indian breeds like Sindhi, Kangayam and also foreign ones like Jersey.

Apparently, many of these entrepreneurs are driven by factors beyond profits. "This is a satisfying and fulfilling business," says Vijay Bhosle, Founder of Pune-based Goufresh, a dairy venture which produces and sells A2 milk (free of the so-called A1 protein and, therefore, easy to digest). "We believe in returning to our roots and, hence, founded the venture in 2016," says Bhosle. The firm has 300 Gir cows and serves more than 400 customers. "We are in talks with private investors," adds Bhosle.

Maram Milk is also planning more customer acquisitions. "We opened our farm with 70 cows last year and are collaborating with many local farmers, of course, with strict checks to maintain quality," says Ali . The enterprise already serves more than 800 customers in Chennai, and has a turnover of Rs10-12 lakh per month. Collaborating with local farm owners and with private investments, the company is planning to expand to Coimbatore and Trichy in coming years. 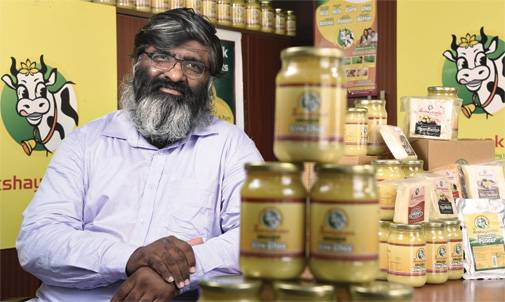 Producing organic farm-fresh milk is expensive compared to regular milk. Cows are not injected with hormone supplements or antibiotics to enhance milk production. On top of that the animals are fed on organically grown fodder and feed which is expensive. This will affect the revenues from the business. According to Akshali Shah, VP, Sales and Marketing, Parag Milk Foods, which sells organic milk under the brand Pride of Cows, it is difficult to cater to large-scale regular customers in this market. "Unlike regular milk, productivity of organic milk is difficult to maintain on a massive scale. So we are very selective about customers," says Shah. "About 3 per cent of our total overall revenue comes from Pride of Cows and we acquire customers only through invitations." Last financial year, Parag reported revenue of Rs1,731 crore.

The organic milk market is also very sensitive. According to industry experts, a fine balancing act is necessary in the business. "If you increase the productivity, you won't be able to find adequate customers and have to sell it in the regular market at normal price making a loss. If you acquire more customers, you won't be able to serve them since productivity is less in this segment," says Bhosle of Goufresh.

Experts warn entrepreneurs to be cautious before entering this industry given the unique industry-specific challenges. For one, the organic milk industry takes a while to become profitable, according to Kuldeep Sharma, Founder of Noida-based dairy consultancy firm Suruchi Consultants. "You have to wait patiently at least for six years or more, understand the intricacies of the market and have deep pockets apart from having a taste for dairy farming," says Sharma. The market is also unpredictable with chances of a customer dropping your service while you're adding new ones is much higher.

Another challenge is to maintain the quality and preserve the milk. While some companies pasteurise milk after extraction, many of them just chill the milk and distribute it directly to customers. "As there are no preservatives, milk gets spoiled very easily. So you have to deliver within eight hours after milking," says a Bangalore-based organic dairy owner revealing that some days more than 10 per cent of the milk will be returned because it is spoilt. This also affects scalability. "You have to have farms locally if you want to expand and scale to new markets, which calls for huge investment," says Shah of Parag Milk.

As a result, organic milk industry is prone to failures. In the past few years, many firms have closed farms and quit the business. S. Mohan Kumar is one such organic dairy owner from the suburbs of Bangalore who had to face losses and shut down his organic milk shop six months ago. "Started in 2010, my business was growing steadily in the initial years and I was getting around 200 litres of milk," he says. He had invested more than Rs20 lakh initially, apart from the land and invested his income back into the business. However, getting good fodder, labour and veterinary services were major issues for Kumar. His cattle began to die and business started falling which eventually led him to shut shop. The industry also lacks adequate rules and regulations as of now. "Apart from a few certifications, currently there is no stringent law stating what is organic and what is not. This is a huge hindrance for the growth of the industry," points out Sharma. FSSAI has already drafted regulations on organic food that will be released soon. The rules will cover the dairy sector, according to industry watchers.

That said, the business is here to stay and will witness steady, if not exponential, growth. Venture capital firms and angel investors have started eyeing this segment. "Last year, we saw an increasing interest in VC funding for the dairy industry, including the organic dairy segment, not only from Indian investors but also from other countries such as the Netherlands," says Janakiram of Frost & Sullivan.

Pune-based Provilac Dairy, Chennai's Astra Dairy Farms, Bhopal's Sahayog Farms are among the organic milk companies that received VC and Angel funds. Akhayakalpa received Rs2.5 crore VC funding in 2013 from VC firm Venture Dairy and is planning to raise around Rs5-6 crore soon for expansion. "Along with good management, companies have to search for funds which have more than 10 years of horizon and have to wait patiently without losing heart," reveals Shashi Kumar, CEO and Co-founder of Akshayakalpa. If the organic milk entrepreneurs can glean lessons from mistakes made in the past, they stand some chance to not only survive in a country where organic is a buzzword now but can milk great success.

The author is a Chennai-based freelance writer

Is R&D a Prodigal Child?

All Set For The Big Game