Good old employee engagement remains the mantra for BPO and call centre firms. This and much more in the Business Today 'Best Companies to Work For' study.

When Ashima Lamba returned to India in 2009 after a three-year stint in Dubai and was looking for work, she was drawn to Genpact, India's biggest business process outsourcing, or BPO, firm. Though she had the option of joining the India offices of the audit and consulting firm that she worked with in Dubai, she chose Genpact, her employer of seven years until 2006.

At Genpact "as long as you are delivering, the rest is not important. It was a big pull", says Lamba, Assistant Vice President of Human Resources, or HR. "Besides, a lot of the earlier leadership was still around." And while the economic slowdown of 2008 and 2009 in the West may have been tough on the company, which gets most of its work from the United States and Europe, Lamba has a lot of respect for how it dealt with the challenges.

Genpact - ranked No. 2 in this year's BT Best Companies to Work for Survey - was one of the few in the BPO business that did not reduce salaries in 2009 and 2010. "We did not necessarily give increments as we did earlier, but we continued to hand out increments and salaries," says the firm's HR boss Piyush Mehta. Genpact did this at a time when it was dealing with slower revenue expansion. In October, it lowered its guidance for full-year sales growth to 12-13 per cent, almost five percentage points lower than its earlier estimate.

All the three toppers in the back office support sector this year, Accenture BPO, Genpact and Wipro BPO, have entered the list for the first time. Last year, the five toppers were IBM Daksh, HP BPO, Infosys BPO, TCS BPO and HSBC Electronic Data Processing.

In the BPO business, people are core assets and the HR focus at Genpact is helping it. The Gurgaon-headquartered company does not pay the best salaries in the industry nor does it hand out huge increments (set at eight to 10 per cent on average this year). Mehta says Genpact's big challenge in the year ahead will be attrition, which has jumped to 28 per cent as of September, up from 23 per cent in 2009. "The market is exploding outside. We need to get our arms around it," says Mehta, adding that low attrition levels at senior ranks gave him some comfort. 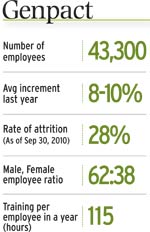 In Bangalore, at global giant Accenture's Asia Pacific BPO, a Genpact rival, Delivery Lead Manish Sharma takes employee engagement equally seriously. Often, he makes a colleague - it could even be a junior associate - travel with him for a day, sit through meetings with clients and partners, and contribute actively. Sharma also organises "town halls" at office, chats with employees over coffee, and even meets their parents.

Accenture BPO, which does not make public the break-up of its 50,000-strong staff in India between software and backoffice work, was among the first in the business to collaborate with a university when it signed up with the Indira Gandhi National Open University for a one-year programme in finance and accounting for its employees.

Ashima Lamba, Assistant VP (HR), Genpact
It has a similar tie-up with the Indian Clinical Research Institute, besides internal programmes such as the Accenture Management Development Academy. The other attraction is movement across any of Accenture BPO's 62 centres worldwide. Says Sharma: "We do not do basic call centre work that has high attrition. We have doctors, engineers on our staff to undertake more critical tasks."

Twenty months into the job, Sharma's counterpart at Wipro BPO Ashutosh Vaidya is coming to grips with dealing with a business where 80 per cent of employees are below the age of 25, ambitious, and demand an exciting and challenging workplace. That, too, in an environment where "we expect near-zero errors, expect employees to work long hours, often through the night," says Vaidya, the Chief Executive for the Wipro unit.

There is a strong urge for further studies among the young employees, and Wipro BPO sees this as a way to fix attrition. "If an employee passes a course, Wipro will pay for it," says Vaidya.

Wipro BPO does not disclose the number of executives working with it (it clubs it with its mainstay software business) or the attrition data but some of these initiatives may be working for it. "High attrition is a way of life in the industry…but we also have employees who started as associates and are now general managers or associate vice presidents," says the CEO.

Taming the attrition beast in the BPO sector may not be rocket science, after all.