Greenhouse gases (GHGs) trap heat in the atmosphere. While some of these gases occur naturally and are emitted through natural processes, other GHGs are created and emitted solely through human activities. Higher proportion of such GHGs in the atmosphere leads to climate change. A course correction is needed. Big question: Who will take the lead?

International laws: Even as 1987 Montreal Protocol laid down rules to banish ozone depleting substances (ODS), several of the substitutes that came into use were GHGs. These were covered under the Climate Change Convention. The Kyoto Protocol included six GHGs and committed developed countries to mandatory emission reduction targets of these gases. These targets essentially focus on overall reduction in GHG emissions by at least 5 per cent below the 1990s levels in the commitment period 2008 to 2012.

The developed economies have contributed the most to GHG emissions and hence, need to share a larger burden of abatement as well.

However, the rapidly rising developing economies, too, are emerging as culprits in absolute numbers, though they are still nowhere near per capita emissions of the developed world. (See Relatively Speaking on top)

Challenges: The US, the largest economy in the world and the largest GHG emitter, has yet to ratify the Kyoto Protocol. And the framework for emission reduction post 2012 needs to be worked out.

How are emissions measured?

In India, 19 institutes are involved in the preparation of data on carbon dioxide, methane and nitrous oxide emitted from activities in various sectors, including energy, infrastructure industrial processes, agricultural sectors, land use, land use change and forestry and waste disposal activities. Some GHGs are more powerful than others. CO2-equivalent is a measure that compares their global warming potential to that of carbon-dioxide, the most prevalent of GHGs. 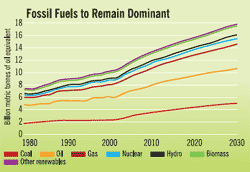 China and India are transforming the global energy system by their sheer size, and energy prices are set to remain high, according to the International; Energy Agency's (IEA's) World Energy Outlook.

The global energy system is on an increasingly unsustainable path.

If governments don't act to change consumption patterns, world energy demand is projected to grow 55 per cent during 2005-30, with use of coal rising the most in absolute terms.

China and India are the emerging giant of world energy. China will overtake the US soon after 2010 to become the world's biggest energy consumer.

Although Asia's oil consumption will still rise sharply, the introduction of policies to reduce demand for crude can cut global oil demand by 14 million barrels of oil a day, equivalent to the current production of the US, Canada and Mexico combined.

The trends don't bode well for cumulative carbon dioxide (CO2) emissions and climate change. Historically, the US and Eu countries have accounted for 53 per cent of cumulative emissions, with China accounting for 8 per cent and India's just 2 per cent in 2005.